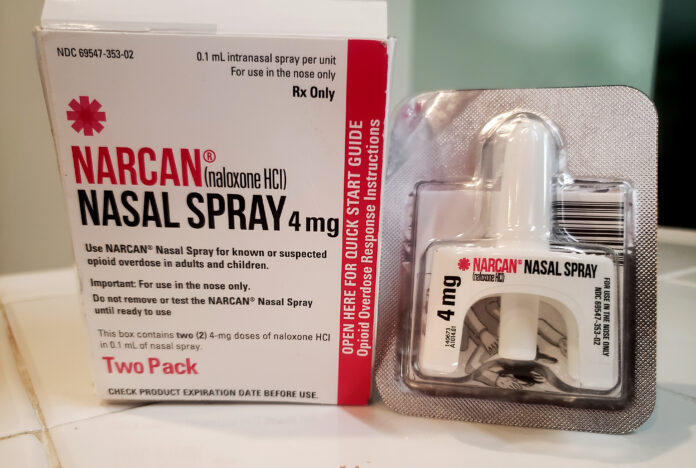 Fentanyl has become a real danger.

While we hear of the national implications of fentanyl overdoses and deaths, we must realize that the problem is also here in Burbank. It usually goes under the daily radar locally, but the danger is real.

There is no one category of people who have become immune to what this dangerous and sometimes fatal drug can do.

And what are the dangers of fentanyl? The Centers for Disease Control and Prevention (CDC) reports that “Fentanyl is a synthetic opioid that is up to 50 times stronger than heroin and 100 times stronger than morphine. It is a major contributor to fatal and nonfatal overdoses in the U.S.

There are two types of fentanyl: pharmaceutical fentanyl and illicitly manufactured fentanyl. Both of these are considered to be synthetic opioids.

The CDC says, “…fentanyl-related overdose are linked to illicitly manufactured fentanyl, which is distributed through illegal drug markets for its heroin-like effect. It is often added to other drugs because of its extreme potency, which makes drugs cheaper, more powerful, more addictive, and more dangerous.”

You can read their full report here.

While we are becoming more aware of what fentanyl is and its dangers of it on a national scale, Burbank is not immune to what this drug, in its illegal form, means to the community.

According to Burbank Police Department Sergeant Brent Fekety, “The Department has arrested over 150 individuals who have been in possession of fentanyl.”

He said that while the department does not track fentanyl deaths, “We do not keep a running log of deaths involving fentanyl. If fentanyl is found at the scene, then it is documented and booked into evidence. Typically, the Department cannot determine the cause of death, but we can preliminarily conclude the reason based on evidence.”

But the nasal spray alone is not all of the training they receive.

“Officers are regularly trained on indicators of opioid use, the dangers of handling the substance, the various forms of exposure, what PPE to wear when handling or investigating fentanyl, how to recognize it, recognition of an overdose involving fentanyl, and the administration of Narcan.’ said Fekety who also stressed, “The training is not a one-time thing and is continuous.”

Burbank Fire Department Paramedics deal with the horrors of fentanyl or other drug overdoses nearly daily.

He said that when paramedics arrive on the scene, they are now authorized to use Naloxone (the generic name of Narcan) by the Los Angeles County Emergency Health Services. Once EMS personnel administer the nasal spray, most patients will return to consciousness.

Once a patient is administered the spray, Burke says that 99 percent of the time, they will also transport the person to the emergency room. In those very few instances a person refuses to go, they must sign a document that they refused to go. Paramedics will leave an extra dose of Naloxone with the victim in case it is needed again in the short future. Naloxone does not cure the person of the overdose but does relieve the symptoms anywhere from 60 to 90 minutes when the overdose may then once again take over.

If you want more information about Naloxone and its use, please go to this website.

Burke also said that the Burbank Fire Department is now using a national mapping service called ODMAP, which documents the time and location of an overdose and whether it was fatal or not. Over time, it will allow first responders to see trends in certain areas of the city.

While fentanyl has also touched our country’s younger population, Burbank has been lucky – so far.

Burbank Unified School Superintendent Dr. Matt Hill knows about the fentanyl national emergency, “Fentanyl use is a national emergency and has become No. 1 cause of death among US adults, ages 18-45, and the use in the adolescent community is a great concern.

The concern regarding Fentanyl is a growing concern across the country. Although there have been no reported Fentanyl issues on any BUSD school sites, we know use is increasing across all communities.”

And while there have been no reported cases in Burbank, Hill is very concerned about the dangers of drugs to the young population who not only want to try new things but also feel they are immortal. “A rising concern is many “party drugs” and other recreational drugs are found to be mixed/laced with Fentanyl. This includes meth, heroin, marijuana, cocaine, pills, etc.

Fentanyl, which is a synthetic opioid, can be deadly even in very small amounts.” said Hill.

He is also concerned with getting the word out to parents and students in the district. “Lack of knowledge regarding the dangers of Fentanyl use to users and of parents is a huge concern. We are looking into ways to partner with other organizations to raise awareness within our community.”

Providence Saint Joseph Medical Center in Burbank has more experience than anyone dealing with fentanyl and opioid overdoses and their effects.

Angelique Campen, M.D., Emergency Medicine physician at Providence Saint Joseph Medical Center and Clinical Professor of Emergency Medicine at UCLA, says that fentanyl has become such a large problem because people sometimes don’t even realize they are taking the drug.

I did a short question and answer with her and got some amazing answers:

myBurbank – How have you seen fentanyl usage grow in the past year?

Dr. Campen – Fentanyl usage outside of the hospital has become an epidemic. It has grown in all age groups, but mostly in the teen and young adult group.  It’s estimated that three out of every five pills purchased on the street contain fentanyl. Pills are being sold on the street as other things, like Valium, and they actually contain fentanyl.  This is where people overdose and die. People don’t even know they are taking fentanyl.

myBurbank – What does fentanyl do to the body, and how soon after taking it does it become effective?

Dr. Campen – Fentanyl is a potent and short-acting pain medication. We use it in the ER for procedures or for quick pain relief. Unfortunately, it is also a respiratory depressant, meaning it affects your ability to breathe.  Too much fentanyl makes you stop breathing.  This leads to brain damage and subsequent death. It is 50 times more potent than heroin and 100 times more potent than morphine. This is why in the hospital, when we give fentanyl, we have the patient on a cardiac monitor and a pulse oximeter.

myBurbank – Is fentanyl ever prescribed by doctors? If so, for what reason?

Dr. Campen – A fentanyl patch (very small, constant absorption) is used for severe pain.  Fentanyl is also used in the hospital for pain but is always under monitoring

myBurbank – Is Providence Saint Joseph Medical Center doing any outreach to deal with the fentanyl problem?

Dr. Campen – At Providence Saint Joseph ER, we have a specific position called a substance use navigator (SUN) who reaches out to patients with addiction issues and helps facilitate treatment.  She has been very effective. We also have a program where we give out Narcan, the antidote for opiates, as a nasal spray for free to any patient or caregiver that asks for it.

myBurbank – No doubt parents should be worried about this. Are there any warning signs that a parent should look for?

Dr. Campen – Fentanyl is a sedative that makes a person appear drowsy.  Withdrawal from fentanyl can make a person feel on edge, sweaty, tremulous, and angry.  Parents should tell their children never to take any pill from another person. I tell people that unless it came directly from a pharmacy in your name, do not put it in your body.  As I said above, more than half of street pills have traces of fentanyl.

myBurbank – Any additional comments you would like to give to the Burbank community?

Narcan, the opiate antidote, is so safe and effective that it is available without a prescription and is covered by most insurance. It cannot hurt someone–when I train the police in the use of nasal Narcan, I spray it up my own nose to show how safe it is—but it can save someone’s life!  A few minutes without breathing causes brain damage and death.

Dr. Campen also went on to say, “I am suspicious that many of the very young cardiac arrests I see in the ER are due to fentanyl, but this cannot be confirmed unless an autopsy has been done.

We contacted the Los Angeles Coroner’s office to see if they kept any stats on the number of fentanyl deaths in Burbank, but they do not log that kind of information.

The CDC reported that in their latest stats in 2020, 8,908 overdose deaths were reported in California alone.

Fentanyl is not always taken on purpose or intentionally, but it is the illegal street trade that has really magnified the problem, according to Dr. Campen. “Pills sold on the street as other things like Valium actually contain fentanyl. This is where people overdose and die. People don’t even know they are taking fentanyl.”