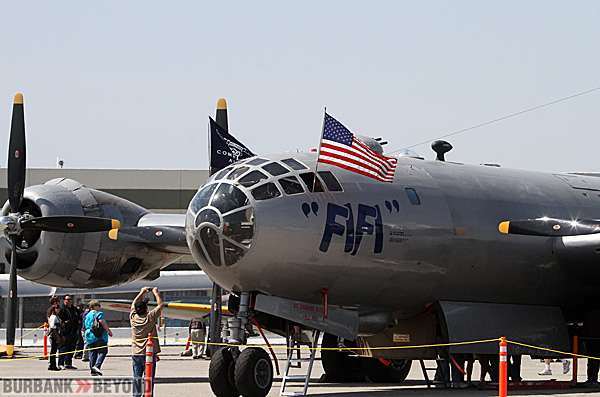 B-29 on display till Sunday at Atlantic Aviation. (Photo by Ross A. Benson)

The last airworthy B29 bomber was joined by a British Spitfire, a Japanese Zero, and other World War II era aircraft this weekend at the Burbank Airport.  FiFi, the B29, is a rebuilt rescue formerly used as a target at the China Lake Naval Air Weapons Station.

Aircraft enthusiasts joined aging veterans to indulge in a bit of nostalgia, waiting in long lines for a quick peek into the airframe that contributed greatly to Japan’s defeat in World War II, as well as seeing action during the Korean War. 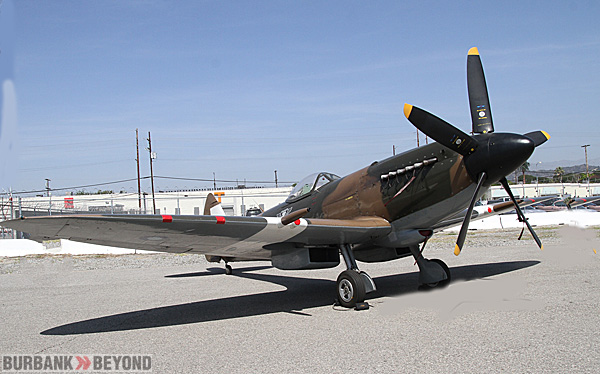 According to Kim Pardon, media liaison with the Commemorative Air Force (CAF), sponsor of the event, more than 2000 were expected to visit the exhibit over the weekend.  “During this tour we’ve been to San Diego, Palm Springs, Camarillo, and we’ll end our California visit in Burbank.”  Pardon also advised the squadron would deploy to Las Vegas following their mission to the Burbank Airport.

The exhibit continues until Sunday.  For those who need to fulfill a dream to fly in one of these classic warbirds, rides are available for a fee.

According to the CAF website, The CAF was founded to acquire, restore and preserve in flying condition a complete collection of combat aircraft which were flown by all military services of the United States, and selected aircraft of other nations, for the education and enjoyment of present and future generations of Americans.

no images were found