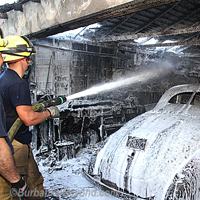 Burbank Firefighters had their hands full when they arrived on scene at 3316 W. Verdugo Avenue, Thursday afternoon as they had a garage well involved with fire.

The 91 year-old occupant was  knocked to the ground after attempting to start his classic car in the garage.   It backfired and caught fire, engulfing the entire garage.
Firefighters made a quick knock down but were unable to save the garage or any of it’s contents which included the 1940 Ford Coupe, and a  trailer parked near the garage.  Firefighter/Paramedics treated the resident, Tom Medley, the owner of both the home and of the car, who was knocked to the ground after the fire started.  Medley declined any further medical treatment.  Burbank Fire sent three engines, two truck companies, a paramedic unit and Battalion Chief, and Assistant Chief Tom Lenahan. The damage was listed at $30,000 to the garage and $60,000 to it’s contents.  There were  no injuries to firefighters  The cause is being listed as an accidental, caused by the backfire from the car’s engine.