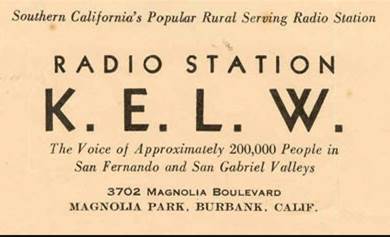 “Every day Burbank is Broadcast to the World”! began the advertisement for Magnolia Park radio station KELW. Earl L White was the owner, he was the original promoter of the Magnolia Park area of Burbank.

The “K” in the call letters designated a radio station west of the Mississippi and the ELW were Mr White’s initials. In 1927 radio stations could pick their own power and frequency.

The first broadcast from KELW was on February 12th President Lincoln’s birthday. They broadcast at 250 watts of power but soon increased it to 1000 watts. The station was originally located at 3702 Magnolia Boulevard and was in business until 1937 as its license was deleted. The building that housed the station was demolished in the 1980’s or early 1990’s

The station boasted many fine programs such as their first one that featured speakers from the City of Burbank dignitaries and outdoor concerts were held at the Portal of the Folded Wings at Valhalla Cemetery and were broadcast live!

An early morning program featured Pedro Gonzalez who was an early “Tejano” performer with his band “Los Madrugadores” whos broadcasts were heard as far away as New Zealand when the atmospheric conditions were right. Can you imagine what the people of that country thought about this music? In 1927 people in New Zealand had never heard of Tejano Music much less heard it played!

These early riser programs were sponsored by Folgers Coffee. Other programming included broadcasts by several local churches on Sundays, a Memory Lane program talked about the Pioneer Days, and a Hawaiian baritone gave recitals accompanied by the Times Aloha String Quartet.

Another feature was to stage imitation prize fights in the studio to recreate the feel of listening to it first hand except they included “Duck” sounds for some unknown reason it says.

The advertising for the station included this statement that “KELW is creating good will for Burbank in the minds of people near and far, and such publicity going to them direct cannot help but create a feeling of interest and give them a desire to come and see our city!”

We will never know how many folks were drawn to Burbank through these broadcasts, but it is certain that thousands of people local, nationwide and overseas did hear and listen to KELW BURBANK!