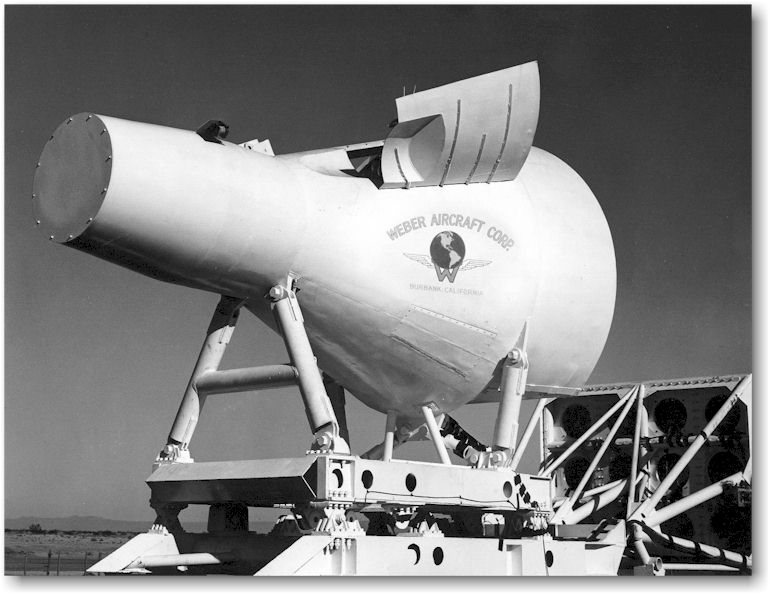 When the Gemini program was superceded by the Apollo program, the capsule was donated to Burbank. The photo shows the mock-up – proudly bearing the Weber Aircraft logo and “Burbank, California” – sitting attached to a rocket sled.

The capsule was fired down a track at hundreds of miles an hour, and then the ejection seats (with seated dummies) would be blasted clear. Once, it malfunctioned and the rockets powering the sled broke loose and shot through the back of the capsule, which had to be rebuilt before testing could continue.

The following text is from the Project Test Engineer for Weber Aircraft Corp Gordon Cress… “I worked on the Gemini System from the onset in late 1961 to its completion in 1964. I was the project test engineer for Weber and supervised/conducted all the off-the-pad, sled and in-flight ejection tests during that period.

He continues with a story about the 2nd picture above… “The photo with the Weber World on the side of the boilerplate spacecraft (by the way, the units shown in the photos are called boilerplate vehicles and not mockups).

BP vehicle #3 had the white boilerplate fixed hatches and the BP vehicle #3A had the operational Gemini hatches for the later tests. Anyway, we had an artist come up to China Lake and he spent one whole day painting the Weber World on the side of the BP spacecraft.

The next morning when the McDonnell and NASA guys got there they just had a fit and demanded that we paint over the Weber logo. So the artist’s work never made it to a test and this is probably one of the few pictures with the logo that exist.” 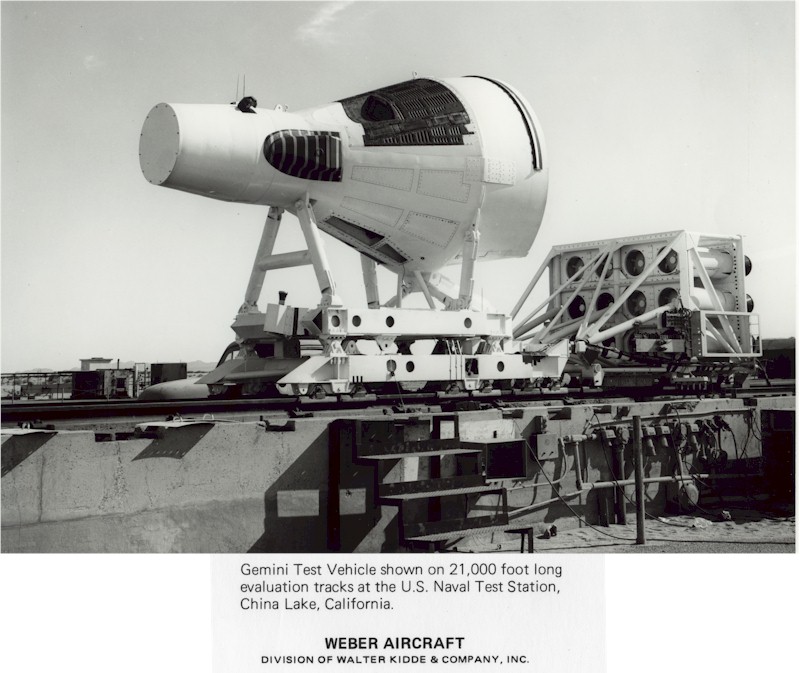 Sadly, the capsule is no longer there, having been removed in the early Nineties. As America and Burbank moved from the socio-industrial Cold War mode to peacetime, citizens found other uses for the attraction.

A lady who works in the city’s Parks and Recreation department stated that it was taken away “…because they had no idea of how many kids were conceived in it!”

I would like to acknowledge the contributions to this article (Photos & Text) by Wes Clark, Gordon Cress & Matt Sparks.

NOTE : The Gemini escape system provided a means for safe escape of the astronauts through use of the ejection seats while the vehicle is still on the launch pad, during boost and after spacecraft reentry. Actual usage is determined by the altitude, the type of emergency, the system condition, the mission phase, and the astronaut evaluation of the problem. The Gemini Escape System was qualified for use up to a maximum altitude of 70,000 feet.  Above that altitude the astronauts would stay with the spacecraft  and/or use its main parachute system for recovery.  Subcontractor for the ejection system is Weber Aircraft.