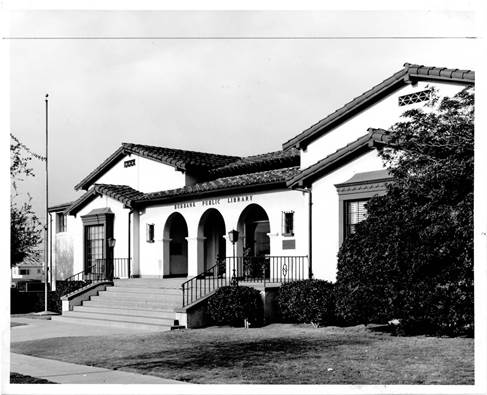 On Olive ave. where part of Bellermine Jefferson High School has the end of its building once stood the original main Library for Burbank. There had been several store front type locations for the BPL but this was to be its permanent location.

Constructed in a beautiful Spanish style it was a showcase for books and events alike.

One huge event was the 100th anniversary of the State of California. Artifacts from early California were on display and a float depicting California History was provided by the State and parked out front of the Library.

About the new library the City had this to say…

“It was apparent to all concerned that the Burbank Library needed a permanent building in order to grow. City fathers at the time looked to the future and realized the importance of a library to an expanding community.

Since the beginning of the charter government in 1927, Burbank had been accumulating building funds for a permanent facility. Despite being in the depths of the Great Depression, a new library building was erected at 425 East Olive Avenue in 1935.

The City provided the land, and the building was completed with S.E.R.A. (State Emergency Relief Administration) funds.

The structure of approxi­mately 6,700 square feet was built at a cost of $33,000 – with­out debt or bonds– through the cooperation of the Burbank City Council, City Manager Howard I. Stites, and the Library Board.

Library service in the new building was still under a year-to-year contract with the Los Ange­les County Library.

The budget projected for the 1936-1937 fiscal year was expected to be $6,000, more than half of that in salaries. Mrs. Ripley, the full-time librar­ian, earned a salary of $120.63 a week. A full-time Assistant, two part-time assistants, and a Page rounded out the staff of the new library.

Once finished the Library was a Beautiful and Grand Structure and the Burbank citizens began using it immediately upon opening. The first year they had 7,382 borrowers who checked out (or Circulated) the 12,711 books 134,217 times that year.

The library had to be added to in the coming years and a large patio made of brick was added also for outdoor events. The patio still remains a part of today’s main library on the Olive Ave. side where there is a time capsule and a bust of Dr. Burbank.

We would like to thank  Louise Paziak of the Burbank Public Library for help with the stats and several of the photographs.