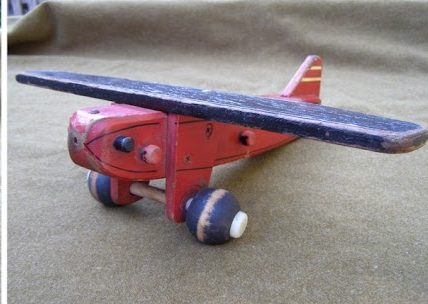 In modern times people are accustomed to seeing toys made of plastic for the most part and many have fancy electronics in them with lights and sound.

Once upon a time not so long ago, toys required imagination and were a bit more sturdy.

Seaver Toys of Burbank was a company that supplied the country with the sturdy toys that young imaginations needed to go beyond, fly high, and reach places only a child’s thoughts could take them.

Located in what is now the back part of BWP on the corner of Lake and Olive Ave was the Seaver Toy Company, who’s employees produced many types of toys all out of wood! Airplanes, Cars, Buses, Trucks and a line of ride on toys were hand crafted and put together by skilled wood workers.

The nearby Burbank Lumber yard supplied all the wood for the company.

To attest to the quality of these toys you can still find many examples of their products today. I have seen them at swap meets, antique stores and especially Ebay. I as a collector own a fine example of a red airplane with black accents that suspiciously looks like a Lockheed aircraft.

To be sure you are getting the real deal Seaver had the foresight to stamp into the wood “SEAVER TOY CO. BURBANK CALIF.” This way you know it’s the real deal when you shop for one.

If you like things Burbank and enjoy antiques you would do well to have one of these local made items from a bygone era grace your home.