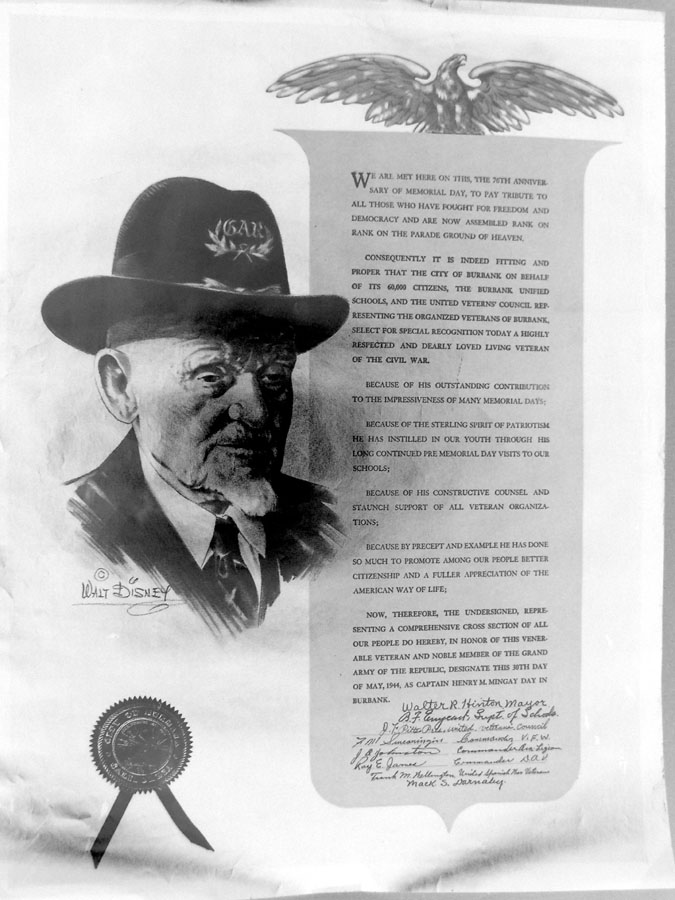 Henry Mingay Was born in England and moved to New York in 1850. He left school in 1860 to become a Printers Devil. So named because their job was to clean the presses, leaving the person with a lot of black ink on them.

When the Civil War broke out he attempted to sign up but they “Were not taking children” his second attempt proved successful and he was sworn into the 69th New York infantry “The Irish Brigade”.

Though Just a young man he fought in all the engagements the 69th was in and was wounded only once in the arm. He moved to the Burbank area and talked tirelessly to school children about patriotism and the Civil War, captivating the children with his stories of combat.

To honor him for all his work with school children the City of Burbank and Burbank Unified School District named an Elementary School after him and the City of Burbank’s proclamation that the 30th day of May 1944 be declared Henry Mingay Day.

No less than Walt Disney himself drew the likeness of Mingay that adorns the City Proclamation.

The school which bears his name is now the Adult Education school. His medals and hat were displayed for many years at the school until vandals tried steal them and damaged many of them. These items were transferred to the Burbank Historical Society and are restored and on display today.

Stop by the museum and see them. You may also learn more about this great man here. http://wesclark.com/burbank/mingay.html