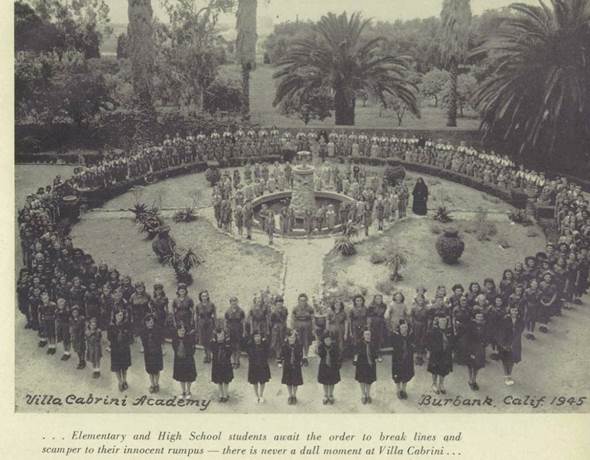 About a year ago, We took a look at Mother Cabrini the first American Saint canonized by the Pope.

Today, I want to focus on her little known school for girls “Villa Cabrini”!

The school was a beautiful campus at the edge of Burbank on Glenoaks. Thousands of girls over the schools long run went from grade school through high school because of Saint Cabrini’s foresight to build a school of this type when Burbank Schools only had a few schools.

The teachers were well educated and capable. All of the operations were overseen by the Mother Superior who was personally chosen for the task by Mother Cabrini herself before her passing.

We see pictures and stories about Burbank Schools, BHS, JBHS, the fine Jr Highs, our great elementary schools, and the several fine Parochial Schools in town. Rarely do we hear of this fine school let alone see pictures of this academy that pre-dated many of the Burbank schools giving opportunity to gain a first class education to thousands of young girls helping them to become educated young women.

Today we should pause and remember this Saintly Italian immigrant who blessed Burbank with her presence and a wonderful school that would become the City’s Woodbury University. Take a look at the following photos that most have never seen of this school in its heyday.