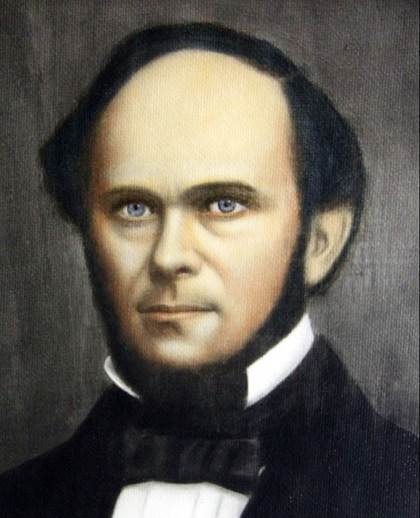 Once, a year or so ago I was watching a History Channel presentation on cities in the U. S. and to my surprise they spoke of BURBANK!

At the end of the segment however they stated that the city was named after Luther Burbank the famous botanist!

I was totally flabbergasted that a channel with History in its name made such a huge research blunder. Given that a quick internet search turns up so many links about our town, it seems to me that they never attempted to fact check such an import piece of history.

So I was thinking that we needed to clear this up once and for all on this Flashback Friday. The City of Burbank California (there are a number of other cities with the same name, ie. Burbank, Ohio) was named after a man named Dr. David Burbank.

Dr. Burbank was a dentist and came to California and settled for a time in San Francisco and opened up a dental practice on Montgomery Street. There is even a picture of the building with his sign in 1855.

He then decided to do a little prospecting and ended up(1866) with a large ranch where Warner Brothers back lot is today. He owned most of the property that would become the major part of Burbank today (9,200 acres).

On this ranch he raised sheep and alfalfa. For reasons unknown he gave up farming his property and rented the land to other local farmers. In 1886 Dr Burbank sold his land to the Providencia Land, Water and Development Co.

One year later on May 1,1887 the city of Burbank was formed. It would not be until 1911 that the City incorporated.

Dr. Burbank took his money from the sale of his property to downtown Los Angeles and built a beautiful theater that promised first rate stage productions. Alas Dr. Burbank died on January 21, 1895.

His legacy was to have given his name to our town and that it has blossomed into a wonderful community with a long a storied history which we continue to discuss here on myBurbank.com and the Website Burbankia and many books that are written about this place we call home.

Below are the many faces of Dr. Burbank. Left to right, His official city Portrait, His Prospecting days, His Wedding portrait, On an Expedition with family and friends.