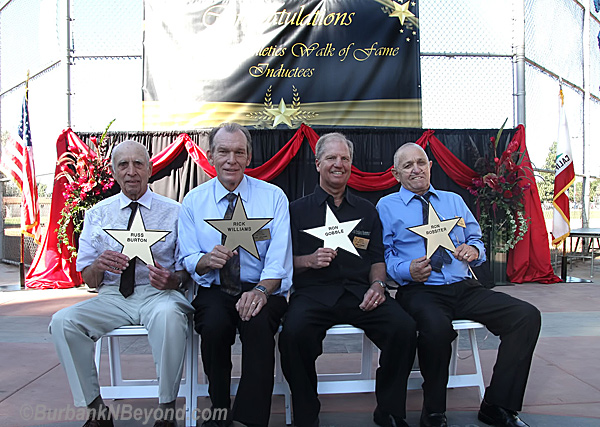 Burton grew up in Burbank, played baseball at Burbank High School, and following graduation continued contributing to city programs for the next 67 years, including roles as coach, player, and team manager.  Burton continues to stay active in the community, working out twice a week with the Burbank Bluebirds, a 55 and older softball team that has made appearances in the national senior softball world series.
Gobble is a native of Glendale, but has been involved coaching a variety Burbank sports programs since 1984.  Whether Gobble is contributing to baseball, basketball, softball, or flag football, he prioritizes fun, sportsmanship, and respect for others as values gained through participation in sports programs.
Rossiter has spent nearly 40 years providing leadership for children’s sports, from T-ball to basketball, as well as participating and coaching adult programs.  Initially donating time to help his own children benefit from Burbank’s sports programs, through the years he has coached more than 45 teams, and finds special fulfillment seeing his “kids” grow into productive adults, contributing to the community.

Williams moved to Burbank from Salt Lake City, and having played sports this entire life, it made sense for him to jump into coaching when his own son became old enough to play T-ball.  Having coached youth team for more than 20 years, Williams is noted for his desire to ensure no child was left behind in sports, including coaching additional teams as required to ensure all kids had a chance to participate.  And after all those efforts, Williams concedes “coaching has enriched my life.”

Throughout the ceremony, which included many of the 54 previous inductees, it was apparent the inductees were humble, and in some cases a bit embarrassed at the amount of attention given to them by the community.  Talamantes noted that “no other city recognizes the people like Burbank,” further indicating pride in being able to have an opportunity to promote unsung heroes within the community.

Al Fredrickson, a 2008 Walk of Fame inductee, feels good about having an opportunity to contribute to the community.  A Burbank native, Fredrickson continues to participate in Burbank adult sports activities, and hopes he has had an opportunity to help “inspire young people from any background” to develop a sense of teamwork and identity.

Mike Graceffo, a 2006 inductee agrees.  “Mothers and fathers are both working now, and Burbank sports programs give young people a productive, fun place to go after school.  Kids need a place to go.”  Graceffo finds particular joy in meeting young adults who greet him in public, many years after participating in teams he coached.  “Often they thank me for giving them inspiration in life, and that gives me tremendous satisfaction the time (spent coaching and mentoring young people) was worth it.”

Flanked by enthusiastic members of the community, representatives from the Fire Department, and a large group of media, the 2011 Burbank Athletics Walk of Fame Inductees were warmly applauded and welcomed into a permanent memorial to their contributions to the youth and City of Burbank.