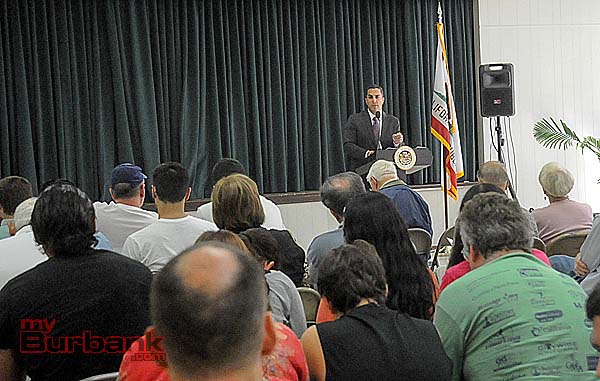 Assemblyman Mike Gatto, who represents Burbank as part of the 43rd Assembly District, held a Town Hall for residents at the Little White Chapel on Saturday afternoon. Extra chairs were brought out for large crowd of residents that came from all over the district, although a majority of the questions came from Burbank residents.

Gatto started out by talking about the recent session and accomplishments including 18 bills that were passed that he had a part in as either the author or was one of the co-authors  The Assemblyman touted his AB 227, which would help protect frivolous lawsuits to small businesses because of loopholes in Proposition 65.

Other major bills that he authored included the way municipalities handled broken parking meters and a revision to the law that gives authorities more time to arrest hit and run suspects.

While he has had his successes, there is still one area that he continues his fight, which is the availability of car pol lanes in non peak hours.  His last attempt was vetoed by the Governor although the same set of rules already apply to Northern California.  He will be taking up the fight again.

Residents were selected at random and their topics were many, with some being local as well as national in scope.  Gatto had knowledge of each subject thrown at him and sometimes was able to give the audience a short history lesson about some of the origins behind the laws and decisions.

Questions included the death penalty, campaign finance reform, in home care for seniors, rent stabilization in California, Caltrans and the I-5 construction, gravel trucks being covered during transportation, banking laws and why texting laws while driving can’t be more severe.

As simple as the question was, it seemed to hit a cord when it came to texting.  The speaker made the point that if you drive in a car pool lane without a passenger, the fine is around $400 and you risk no one’s lives, yet if you drive and text, you are risking lives and the fine is only $20.

Other topics included the Do Not Call list, concerns about illegals who can now get a drivers license not having insurance, runaway film production, Federal money for rail projects, think tanks about spending future money, teaching administrator salaries, two thirds majority in passing budgets (which is no longer a requirement), standardized testing in schools, overtaxed and over regulated rules on businesses and Prop. 13.

While it was clearly a wide ranging conversation, many of the items are somewhat addressable while some are issues that the federal government has control of.

Gatto explained that hopefully California is out of the financial situtauion that has crippled the State in recent years and does not anticipate any more cuts to existing programs and hopes that funding will eventually be restored to some of those cut.

When responding to some residents concerns of laws not being followed he responded, “We don’t always need new laws, just better enforcement of the laws in place’.  It does seem that Caltrans, however, does not always follow the law on some projects and is a sore spot of Gatto.

“Caltrans is a tremendous source of frustration for both my family and myself. I am constantly talking to Caltrans (regarding their actions and policies).” About some of the everyday problems that frustrate residents, there was agreement, “Small things are often the biggest nuisance in life”, said Gatto.

In all, there were no confrontations and people were there to have their opinions heard and their questions answered.  No one walked away without an answer and there were plenty of staff members on hand to make sure that individual concerns were met afterward.

Near the end, one resident was worried about the possible loss of Prop.13, to which the Assemblyman said quickly and with authority, “Proposition 13 is not going anywhere soon”.