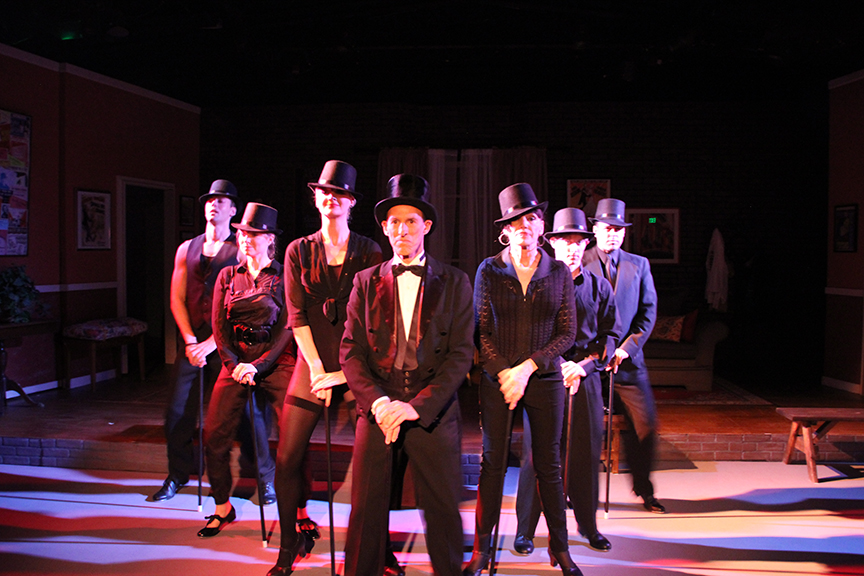 The Ghost of Gershwin has memorable music (WAYLAND PICKARD) Pickard) with snappy lyrics (LAURA MANNING and Pickard) that capture the lighthearted but heavy-talented spirit of 20’s and 30’s Broadway. Choreographer MICHELE BERNATH delivers impressive act openers and variety throughout (tap, jazz, even a dash of Celtic.) Somewhere up in that Great White Way in the sky, George and Ira are smiling in approval.

Present day: Gershwin-obsessed composer Grant (ANDREW BOURGEOIS) is several months behind on the rent of his Brooklyn apartment. (Good thing Cornelia (SUZY LONDON), his soft-heated super, is more interested in singing than evicting.) Grant doesn’t notice (at first) the fetching tile setter Mel (JEAN ATADEL), who caulks by day and cabarets by night. He’s still carrying a torch for Nessa (EMMA-JAYNE APPLEYARD), a tall glass of water who tap danced all over his heart then ditched him at the altar, only to marry his best friend and long-suffering business partner Dennis (GREGORY GUY GORDEN.)  And Dennis is steamed over Nyssa’s choreographer Wilfred (KYLE BARES), who seems all too ready to tango. Director JULES AARON successfully blends  “La Vie Boheme” with the screwball energy of a Preston Sturges comedy.

Now add a piano that can summon the ghost of George Gershwin (DANIEL LENCH.) And a very engaging Gershwin he is, ably adding to a spirited tradition that ranges from A Christmas Carol to Play It Again Sam. In life, George had allowed his musical genius to elbow aside serious relationships, something that had bothered him increasingly in his all-too-short life. (He died at 38.) Deader and wiser, he wants to help Grant find his authentic composing voice and a genuine love. (Hint: “A pretty girl is like a mel-o-dy.”)

The book (DOUG HAVERTY) has wonderful characters, compelling themes and a great set up. It just needs to connect with the songs more in the classic musical fashion, with the spoken dialogue building the emotional intensity until it must burst into song. But tweaks like this are an expected part of the refining process, one made much easier with such fine songs to connect to.

I’ll hazard an idea, fully aware that paring down the length of a musical is a huge challenge. What if Gershwin’s ghost reminisced about his earlier life, maybe just a memory or two triggered by his helping Grant. He hears his earlier self on the piano, playing yet another one of his tunes for an admiring audience, when his friend Oscar Levant quips, “George, if you had to do it all over, would you fall in love with yourself again?” What might the ghost of Gershwin answer to himself in reply?

The Ghost of Gershwin embodies the lessons that Grant will learn by the show’s end. It knows the difference between inspiration and imitation, and knows full well that melody and romance were made for each other.  Along with George and Ira, may a Broadway angel (or two) come to smile on this delightful homage musical.