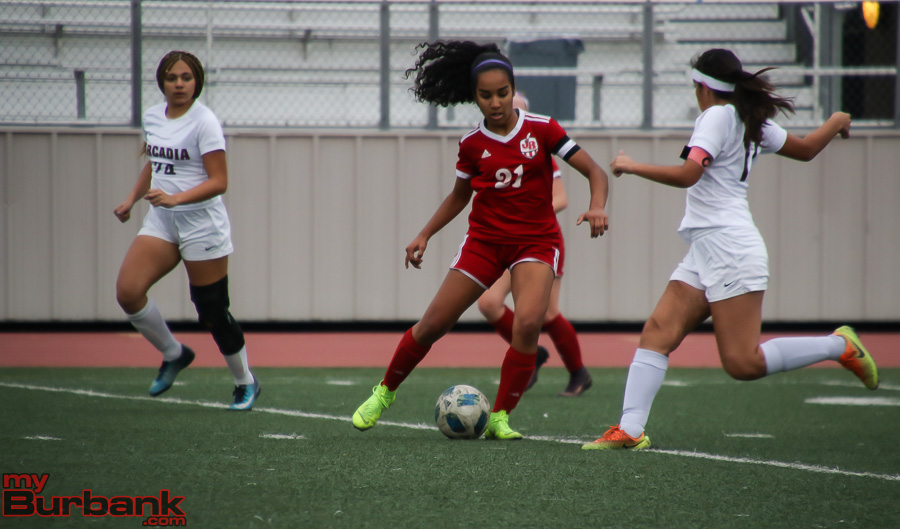 The Burroughs and Burbank High girls’ soccer teams have reason to be optimistic about the upcoming season. Burroughs won its first league title since 1993 last spring. Burbank is looking to make more progress after showing glimpses of fine play last year following a winless 2017-2018 season.

The Indians went 16-4-2 last season, winning their first league title since 1993.
Burroughs did lose some key players to graduation, but still have a strong core back.

Junior forward Lauryn Bailey returns and figures to continue to be a team leader, as she has been the past two years. Fellow junior Lily Gonzalez is an offensive player who should partner with Bailey to provide a dangerous attack. They were co-league Players of the Year last year.
Up front the Indians also have senior Trinity Vournas, sophomore Megan Schmidt and freshman Kara Aldana-Pere.

Senior Stephanie Martinez and sophomore Kaylin Casper will compete for the starting goalkeeping position.
“We have a lot of talent,” coach Brady Riggs said. “We would like to stay in the league race and to try to make a run in CIF.”

The midfield has lost star Abbie Riggs to graduation. Senior Olivia Cashman and juniors Gabby Morales and Jessie Virtue will try to make up for her loss.
Junior Olivia Aguilar, senior Stephanie Torres, sophomore Viviana Medina and freshman Julia Narmore will be expected to fill the rest of the midfield roles. Senior Megan Knutson gives the Indians a player who can help stretch the field as a winger.

Defensively the Indians are solid by senior Orla Giffen and junior Mallie Romberger in the center spots. Seniors Ava Kramer and Alex Mills should help out in the wing back positions, along with sophomores Athena Vournas and Charlotte Sanchez.

Junior Ashley Peltier, a transfer from La Canada, is another player the Indians will look to for help once she becomes eligible in January.

The Bulldogs enter the third year under coach Pablo Diaz with hopes of continuing the trend of getting better.
Burbank went 3-15-1 last year and 3-10-1 in league.

“We’ve gotten better, but the other teams have as well,” Diaz said. “We want to go into each match with the same mentality.”

The Bulldogs are led by junior Liliana Partida, who is a three-year varsity player with capabilities of playing a number of roles.

Senior winger Sydney Sugars is also expected to have a solid season.
Burbank will rely on sophomore Madie Chase to be the attacking midfielder.

In goal, Burbank will rely on senior Lindsey Miller, a softball player who will bring her athletic talent to the field. Junior Nicole Girod, a returning varsity player, will compete with Miller for the starting spot as the final line of defense.

In the midfield, Burbank can expect to get support from sophomores Alyssa Mendoza, Karolyn Pimentel and Eloise Livingston.

Juniors Vanessa Vasquez and Isabella Garcia figure to compete for time on the wing opposite of Sugars.