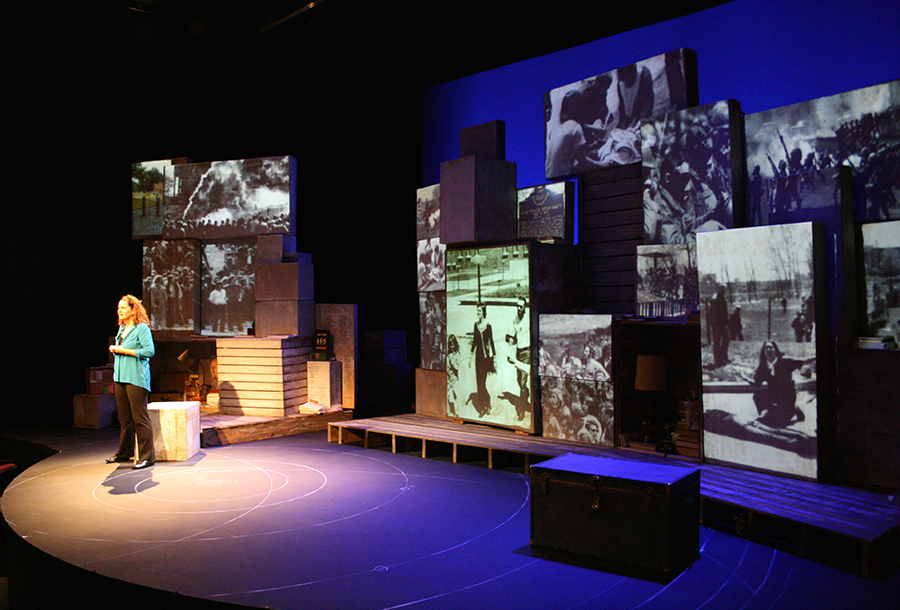 You’ve heard it said, “If you can remember the 60’s, you weren’t there.” But one woman remembers them very well. She had a ringside seat as the best and worst of those times took off their gloves and squared off in the family arena.

The woman is KELLY CARLIN, the only child of the late George and Brenda Carlin. She was the apple of her parents’ eyes, and lucky for us, she didn’t fall very far from the family tree. A Carlin Home Companion: Growing Up With George, now playing at The Falcon Theatre, lets us see the Carlins through the eyes of a precocious young girl, a troubled teen, a searching twenty something and, happy ending, a woman with hard-won wisdom.

The director of the one-person show is PAUL PROVENZA, who showed the audience that multimedia has indeed come of age, with music, photos and film clips woven into a seamless garment of entertainment wrapped around Kelly’s talent. It’s no easy task to recapture the ambiance of Kelly’s impromptu reminiscing back in 2010 on “Lew’s Cruise.” As Kelly tells us in the program notes, comedian Lewis Black oversaw “an alcohol-fueled cruise through the Caribbean,” with “seven of his favorite comics and 400 hardcore comedy fans.” Kelly wanted “to take these stories on the road to my father’s fans,” and Paul told her, “If you want to do it, I want to direct it.”

Their four-year effort to bring Kelly’s stories to the stage paid off. They’ve given us a window into a remarkable family and through them, a window into the watershed era that influenced them.

Her father George Carlin had looked at the world around him with fearless eyes. He told us what he saw, and shook us like an LA earthquake with his humor and wit. He shouted into the abyss, and made it echo with our laughter.

Her mother Brenda was beautiful and brainy. She had been heading for university and the upper middle class good life when she got derailed. But she dumped the derailer, met George, and their romantic fireworks upstaged the sun. She helped him hack a fresh path through the jungle where comedy and serious politics circle and spar, treacherous territory that only a few other brave souls, like Mort Sahl and Lenny Bruce, had dared to enter.

To those wishing to make their own mark, it’s heartening to see that George needed time to master his craft and to realize he was more at home on a live stage than a film or TV set. He’d mingled with other pioneering 60’s artists, tried this and that and became a Mark Twain for modern times, making us laugh and cry at our reflections in the American mirror.

But the early days of transformation had their blind spots. Wives and girlfriends were often relegated to the mimeograph copier as their men folk laid plans to liberate the world from racism and war. (And these were the guys on the cutting edge.) Women’s lib would come into its own in the years ahead, but for much of the 60’s, bright women like Brenda were still trying to emerge from the bushel, a task made all the more difficult when there’s a dazzling light beside you and you’re the designated stay-at-home parent.

Kelly had to face the dark side of the 60’s as well: drugs. At one time or another, they complicated the life of Kelly and her parents. Sometimes Kelly had to be the parent to both George and Brenda. Imagine doing that with no sibling to share the burden. It’s even harder when the same personality traits that fuel creativity are also fueling a coke habit. But in spite of all the madness, she and her parents remained “the three Musketeers” as George cut ever-larger swaths as an original comedic voice.

But a bad as drug abuse can be, Kelly shows us that the most heart-wrenching conflicts are not good-versus-evil but good-versus-good. No less than the recent discipline of “positive psychology” has confirmed what had already been known to commonsense: mastery of a valuable and challenging craft is enormously satisfying. Exercising that mastery can be so satisfying that it can seriously compete with other essential sources of happiness, like maintaining relationships. George Carlin and deceased “American sniper” Chris Kyle were light years apart in many ways, but both of them were caught in the tug-of-war between being “in the zone” and being with family.

It was enjoyable to see Kelly in a film clip that showed off her own comedic gifts. Indeed, Kelly writes for film and TV with hubby Robert McCall, and is a radio show host as well. I hope that future audiences—as well as future readers of her upcoming memoir (St. Martin’s Press in 2015)—will see more examples of Kelly’s own creative emergence, beyond what is currently revealed by the monologue itself. That would be a triumphant ending indeed for the “third Musketeer.”

The Carlin Home Companion: Growing Up With George continues through March 1 at the Falcon Theatre, 4252 Riverside Drive, Burbank. Wednesdays to Saturdays at 8 p.m., Sundays at 4 p.m. Tickets are $36.50 to $39 Wednesdays and Thursdays, and $41.50 to $44 Fridays, Saturdays and Sundays. Students, $29 with valid ID. To purchase tickets, please visit www.FalconTheatre.com or call 818-955-8101.