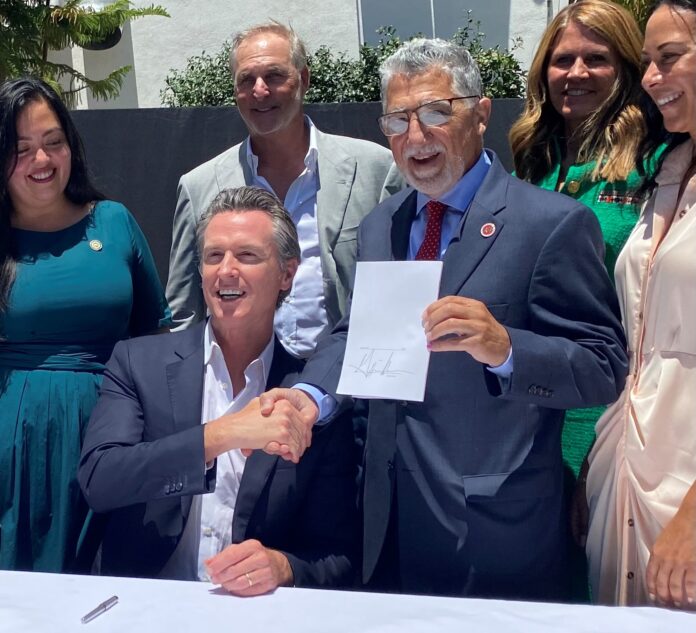 Today, Governor Gavin Newsom signed Senate Bill 144, authored by State Senator Anthony J. Portantino.  The bill includes a $180 million increase to the current film and television tax incentive program and $150 million for a new incentive tied to the construction of soundstages.  For Portantino, the success of SB 144 is part of his deep commitment and appreciation of the entertainment industry.  Like thousands of present-day Californians, he moved to Los Angeles from New Jersey after graduating from college to pursue a career in the industry.  Senator Portantino worked in production until he transitioned to public service.

“I am incredibly grateful for Governor Newsom’s leadership and for his commitment to keeping and expanding film and TV production where it belongs.  Entertainment content is a core economic driver for California and a big part of my district’s vitality.  Investing in new soundstage construction is a critical addition to our efforts to increase filming in the Golden State.  Modernizing our studio infrastructure will ensure that future entertainment careers will flourish here and generations of people from across the country will continue to see our state as the entertainment capital of the world,” commented Senator Anthony Portantino.

Since its inception, California’s film tax credit programs have generated billions in economic benefit for the state. During the increase in activity, construction of soundstages has not kept pace with the growth in film production, scripted television, and streaming content.  In addition, the current program faced a two-year shortfall.  Seizing the opportunity to address both issues, Senator Portantino paired up with the State Building and Construction Trades Council to introduce SB 485 earlier in the year. That effort and continuing budget negotiations led to the passage of SB 144 and it being signed into law.

“The continuation of the entertainment industry, one of our core industries, is key to California’s economic success,” stated Robbie Hunter, President of the State Building and Construction Trades Council. “The soundstage construction tax credit, led by Senator Portantino, will allow California to remain competitive with other states that are looking to carve up Hollywood as yet another raid on the California economy.”

In addition to the monetary incentive, SB 144 includes a creative plan to increase diversity within the film and television production workforce.  The bill requires a production to submit a diversity work plan, which includes diversity goals for workers.  An additional tax incentive is tied to meeting those goals.  The diversity goals are required to be broadly reflective of California’s population, in terms of race and gender.