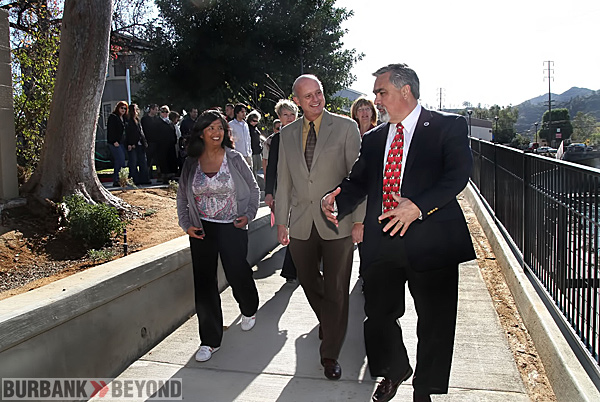 Residents will now enjoy access to a quarter-mile, meandering pedestrian path running along the east side of the flood control channel from Alameda Ave. to Victory Blvd. It featues landscaping with colorful, native drought-tolerant plants and trees; and improved lighting. There is now access from Spazier, Elm, and Linden Avenues with imporvd connectivety to Alameda Ave. and Victory Blvd. The pathway also has doggy stations.

LA County Supervisor Michael D. Antonovich, a longtime advocate of the project, noted that the area will bring members of the Lake Alameda community closer together, increase their access to recreational opportunities and provide a safe corridor for school children. 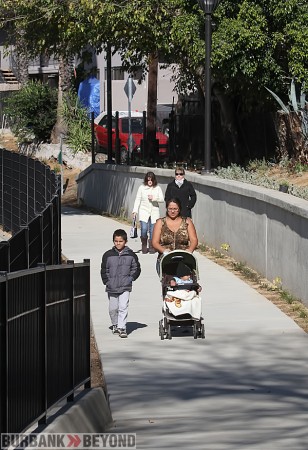 Walking along the newly opened greenbelt pathway. ( Photo by Ross A. Benson)

“The transformation of this corridor from a blighted area to a $1.7 million community treasure is truly remarkable and made possible only through the partnership we share with the City of Burbank and its residents,” Supervisor Antonovich said.

Lake/Alameda is located along Burbank’s southeast border. Protecting this community and many others from flooding is the Burbank Western Channel, which funnels stormwater away from city streets and off to the Los Angeles River.

While the channel provides a valuable service to local homes and businesses, the area adjacent to the channel between West Alameda Ave. and South Victory Blvd. had become blighted over the years with invasive plants and trash. Working with the City of Burbank, Flood Control District engineers recognized the site’s potential as a habitat corridor for migrating wildlife and park-like environment for local residents.

“We are proud to dedicate this new and important greenway,” says Burbank Mayor Jess Talamantes. “We work to provide open space and recreational opportunities for residents in every corner of the City and this collaborative project continues that mission.”

Search for New City Manager Given Timeline Structure
Time to Get Into the Swim at Verdugo Pool
Magnolia Park Debuts Parking Lot with Ribbon Cutting Ceremony
City Council to Look at $50,000 Donation to YES on Measure B