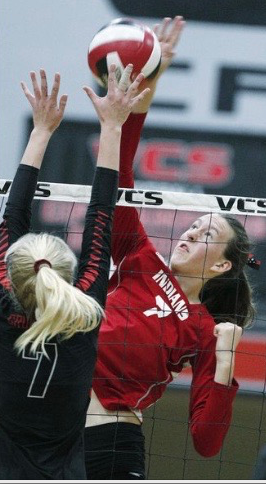 Who would have thought that two longtime friends, living in the same city, playing the same sport, but for different high schools, would both verbally commit to the same university?

It’s a longshot, for sure, but that’s exactly what happened to Lydia Grote, who attends Burroughs High and Kendall Jensen, who is at Village Christian School, as the pair will play volleyball for UC Berkeley.

Of course when these two first met they weren’t thinking about which college they would attend.

They were buddies, having fun and enjoying their childhood. Now that’s in the past as both will be seniors in the fall.

How did these two meet? Sometimes stories differ greatly, some slightly, but not this time.

“I was six years old when I met Kendall,” said Grote, a 6-foot-2 middle hitter/outside hitter. “I met Kendall at Roosevelt Elementary School at my sister Marin’s first basketball practice for her team the Fireballs. Kendall was sitting in a tree, and I remember thinking that I had never climbed a tree before, and then she climbed down and showed me how to climb a tree.”

Grote went on: “Then once I finally got up into the tree, she introduced herself, and then about a month later I joined her softball team, the Fireflies, and from then on we played on all the same softball, volleyball and basketball Parks and Rec teams,” she said.

Here’s Jensen’s version. “Lydia met me when we were in the second grade at our older sisters’ basketball practice,” said the 5-8 setter. “At that age I was very adventurous and decided to climb a tree out of boredom and soon after I did, Lydia saw me and decided to join me.”

Jensen continued: “After that we started going to all their practices and games to hang out and we’ve been friends ever since. We’ve also been playing sports together since second grade through the City of Burbank. We’ve played basketball, softball and volleyball together for a long time.”

Grote’s older sister, Marin, was a two-sport standout for Burroughs where she played basketball and volleyball.

“Both Lydia and Kendall are phenomenal athletes and girls who have grown up playing together on and off the court,” she said. “Seeing these two girls, my sister and my best friend’s sister, work hard to get to be such high level athletes on a top volleyball team in the nation and then both were considered underdogs for recruiting and both go to a Division I and Pacific 12 school is truly an inspirational story.”

Grote just concluded her freshman year playing on the women’s volleyball team at the University of Washington in Seattle.

Are Lydia and Kendall alike on the floor? “On the volleyball court, Kendall and I have very similar personalities,” said Grote, who plans on majoring in biology or biochemistry. “We both are going to work our hardest and we are both always going to do whatever we can to help our team.”

Burroughs and Village Christian both have excellent girls’ volleyball programs and are perennial powers in their respective leagues.

Was there ever a thought of the two playing on the same prep team?

“It would have been a ton of fun to play on the same high school team, but I do not want to leave Burroughs, and she does not want to leave Village Christian,” said Grote, who has helped the Indians qualify for the playoffs all three seasons she’s been there.

Jensen thinks it would have been exciting, but it didn’t work out. “I wish Lydia played for Village so bad,” she said. “I’ve been trying to get her to come to Village for a while now and I’m still trying. We have such a good connection on and off the court and she would be a huge asset to the team if she transferred.”

As expected, the match went five sets with Village Christian, which has also qualified for the postseason all three campaigns that Jensen’s been on the team, pulled out the victory.

“The highlight of my career was definitely the CIF volleyball game against Village Christian because Burroughs played better than we ever had before and every person on our team had the same goal and mindset and we were all so passionate about the game,” Grote said.

Jensen remembers that match fondly. “We played this past season in the CIF quarterfinals. We won in five, but it was so fun,” she said. “We had so many people come out and they brought so many people as well so the energy in the gym was just insane. That win was one of the best wins ever especially because that was probably one of toughest matches.”

What makes volleyball so much fun? “The thing I love most about volleyball is the competition, the constant fight in the game and the team camaraderie,” Grote said. “I love that everyone always works hard to be the best they can be and that volleyball is a very clean sport, meaning teams are always respectful to each other and nobody tries to undermine the game and everyone is always honest about calls.”

“Volleyball is such a fast and intellectual sport that always keeps you engaged,” she noted. “I also love the team aspect of it and being able to play with some of my best friends.”

Grote and Jensen have both been team leaders for their teams.

“I like being considered a leader because it means that your teammates trust you and that you are a reliable player, on and off the court,” Grote said.

Jensen also likes the honor. “I’m the captain for high school and also captain for my club team,” she said.

Grote and Jensen are very good athletes with the potential to excel at multiple sports, but each has chosen to stick with volleyball.

“I liked playing multiple sports when I was younger, and I have had the opportunity to play basketball at Burroughs,” Grote said. “but volleyball is my passion and it is where I want to be.”

Jensen echoed the same sentiment. “I don’t play any other sports other than beach volleyball which is pretty similar though,” she said. “I grew up playing softball, basketball and swimming. I do wish I never stopped playing some of them around the seventh and eighth grade. I decided that I really wanted to pursue volleyball and play in college. It just got hard juggling so many sports.”

Everyone needs assistance, and Grote and Jensen both received their share in order to get to this position.

“The most helpful people in my volleyball career have been my parents, my sister Marin and my club director and my current club coach, Kenji Mukai,” Grote said. “My parents have always supported me in volleyball and have made it possible for me to be who I am today. My sister Marin always made me a better player and she is also my best friend. My club director, Kenji Mukai, has always believed in what I can do and has always given me opportunities and chances to get better.”

Jensen also has support. “My parents, who got me into the sport have helped me so much and I’m so grateful for that, but also my coaches,” Jensen said. “Brent Asuka has helped me so much as well as Jimmy Lo. I also want to thank Lisa Steenport who was my coach from 11s-13s. She was the one who encouraged me to try setting in 13s and without that encouragement and insight I wouldn’t be where I am today.”