This weekend go to the Grove Theater Center, sit down for a spell and get ready to laugh your d-e-r-r-i-e-r-e off. Domino One’s production of The 25th Annual Putnam County Spelling Bee offers an evening of great musical comedy with high energy and hilarious improv. The singing ranges from the comedic to the lyrical, with Lisa Dyson in particularly fine voice.

Spelling Bee takes place in a middle school somewhere in small town America. Competing in the Bee are several eccentric early adolescents: a multilingual overachiever (played by Charlene Kim), a caped underachiever (Jacob Krech) if you believe his family, a boy scout (Sam Bixby) with surging…hormones…, an angst-ridden teen (Christine Martini) contending with two dads, another teen (Amanda Charney) hoping her dad will show up, and a geek (David Gallic) who gives a whole new meaning to the “poetic foot.” 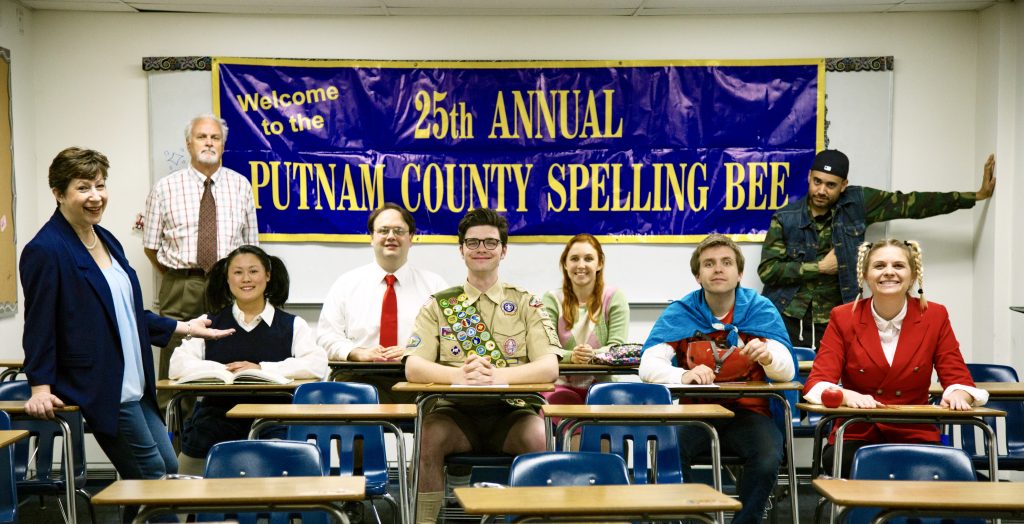 The trio of quirky adults include the streetwise guy (Jason Mulero) doing community service, the droll vice-principal (Michael John Shaughnessy) every bit as nuts as the V.P.’s we remember, and the Queen Bee impressaria (Lisa Dyson) reliving former days of spelling glory.

By pre-show arrangement, four brave audience members join the cast to compete in the Bee, amping up the improv and the laughs. Should you volunteer, be prepared to spell anything from “he” to “heterogeneous.”

“Domino One Productions focuses on shows that are small and actor heavy,” states Producer/Director Taylor Wesselman. So often “the actors do double duty” (as in Spelling Bee’s scenes involving the contestants’ parents.) Wesselman also points out that improv is a huge component to Spelling Bee, with the actors having to “stay on their toes to react and play with the audience volunteers.” The improv also meshes well with Domino One Productions’ focus on “relatively new works or re-imagined old classics.” 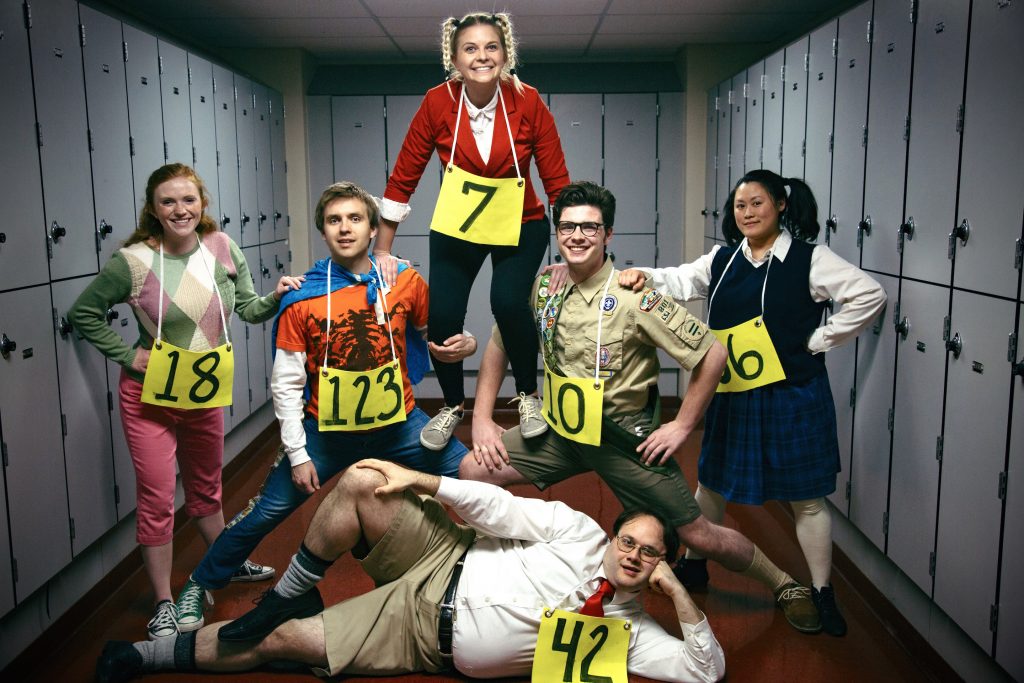 Do spelling bees have any relevance in today’s era of spell check? Well for one thing, preparing for a bee is more than memorizing sequences of letters. It’s closer to a linguistics course: learning about word origins, multiple meanings, suffixes, prefixes, roots and pronunciation.   It’s no accident that one of the most formidable contestants in Spelling Bee knew multiple languages. Spelling Bee is a humorous reminder that we humans are not prepared to surrender all of our capacities to the machine. It’s too much fun to exercise them.