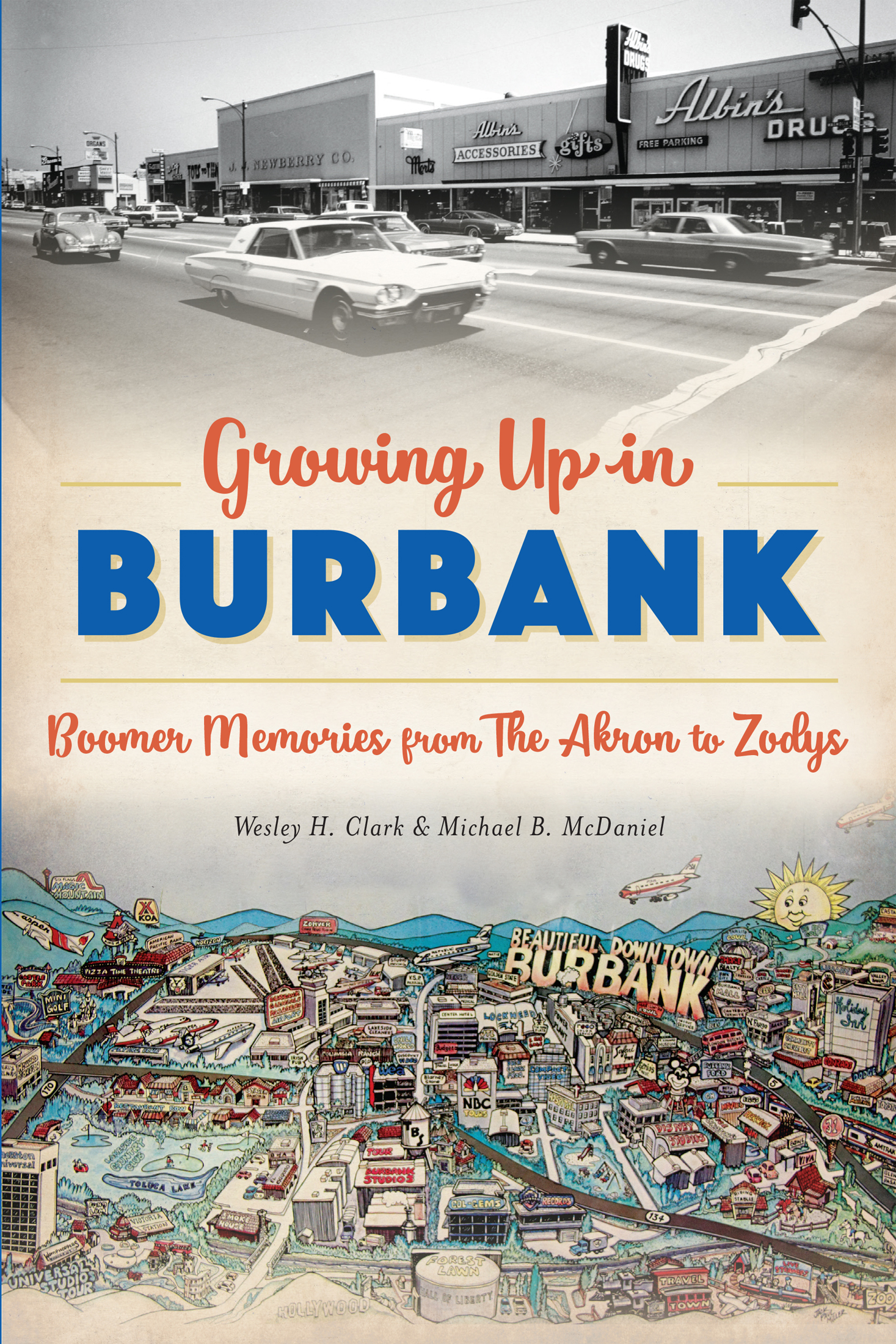 For those who haven’t lived in Burbank most of their lives, the city’s rich history may be lost on them. Burbank was founded in 1887 and has since gone through many transformations, many of which have been lost on the generations that follow. This, however, is not the case when it comes to Growing Up in Burbank: Boomer Memories from The Akron to Zodys

This book provides a first-hand account of what it was like growing up in Burbank during the 1960’s and 1970’s. Written by, Wesley H. Clark and Michael B. McDaniel, both of whom grew up in Burbank, shed light on Burbank’s personality during what they deem “the wonder years.” This collection of short stories, information, and classic tales solidifies an identity for a city we all have grown to love.

While these stories and first-hand accounts cater to the baby boomers found throughout Burbank, I found a refreshing sense of adoration for a city that is home to so many with a wide array of backgrounds. That’s what’s special about this book. No matter what kind of upbringing you’ve had, you will find pockets of a shared sense of enthusiasm between the lines.

Whether you grew up in Burbank during the 60s and 70s, or you’re interested in how the generation before you lived in your city, Growing Up in Burbank is a must-have on your bookshelf.

Below is an interview with the two authors of the book. If you’re interested in meeting Michael McDaniel, there is a planned signing at Bell Cottage (3322 W. Magnolia Blvd.), January 27th from 3-7pm.

What inspired the two of you to take on the challenge of writing a book and publishing it?

Michael: We were originally approached by the publisher who found our website “Burbankia” and did not have a book about Burbank in their series about American Cities so they asked if we would do one since we had all that information and pictures already and “Lost Burbank” was born. The book did well and Wes approached them with a proposal for this 2nd book and they were eager to publish it also.

Wesley: It was indeed a bit odd. Most writers com up with a manuscript and shop it around. In our case the publisher came to us. Very flattering! But we realized that there some stories to be told with the second book, Growing Up in Burbank. More personal ones as opposed to the ones in Lost Burbank, which were more historical!

For those who purchase your book, they’ll find references to the show The Wonder Years. How integral were The Wonder Years in helping you and Wesley frame and create Growing Up in Burbank?

M: Wes and I are the exact age of the lead character in the TV series. Making matters worse the series is filmed in Burbank. Kevin in the series has a locker in his Jr High school and it is filmed at the school I attended here and my actual locker was 2 down from Kevin’s in the series. Very close to home is that series to us.

W: The Wonder Years is an example of Burbank standing in for an entire generation of Americans from places all across the U.S. But what really framed Growing Up in Burbank for us is the fact that we’ve known one another for 45 years, since high school. The book is not just about a place – for us it’s also about a friendship.

Having spent so many years in the city of Burbank, how did you decide what to write about? Were there any tales or certain locations you had to cut out of the book?

M: As they say “The names are changed” to protect the guilty, HA HA. yes, there are things we left out and something’s  may not have been appropriate to share. Originally we started with ourselves and knew of stories from our friends and classmates along with people we have met along the way. People write us with tales of Burbank and we post them to our “Burbankers Remember” page on Burbankia.

W: The “Hooligans” chapter – written by our pal Bob Avery – is the closest we come to a “tell-all” narrative. (Notice that it contains a legal disclaimer at the end!) Were there things cut out of the book? Of course! There is such a thing as being too personal! In deciding what to relate we went for things that were characteristic of the way our peers grew up in town – but which were unique to Burbank (the media town influence, Lockheed, cars, etc.).

What are you hoping residents of Burbank, both past, and present, get out of this book?

M: Mainly that this was the most fantastic city to grow up in as Baby Boomers. Moreover, we want people to know that this is a most amazing suburb in the whole U.S.

W: We want readers to go through this book having happy memories reawakened. The best books, we think, are the ones in which the reader plays some active part. This personalizes the book. Burbankers can remember the places and things we invoke and compose a little book of their own in their heads.

How would the two of you encourage Burbank’s youth to pick up and read Growing Up in Burbank?

M: They will learn about the generations that shaped the city they live in today. People today tend to not understand that the things they enjoy today, were built by the people who came before. It is good to remember what was done before and who did it so they can enjoy the city today!

W: Young people don’t change much in their desires and dreams with time – this is why copies of Tom Sawyer and Huckleberry Finn still sell. If young people read our book we think they’ll recognize a lot of the impulses we and our peers had – to be hooligans, for example. The only things that have changed with the passage of time is the music, clothing, and technology. Superficial things. The basic desires to have fun are an enduring part of human nature and growing up.

M: The third book is already finished and at the publisher for review and editing. We expect it to be out around September and it is an awesome finish to the trilogy. The working title is “Burbank Stories: Tales from Los Angeles’ Most Surprising Suburb.” We are certain that all will find this book so interesting you won’t be able to put it down. this book is full of things Wes and I did not even know. The thing about Burbank is just when we think we have found it all… More turns up! We have found this to be true since we started Burbankia in 2003.

W: The third book compliments Lost Burbank in that there is history recounted – and it pairs with Growing Up in Burbank in that we see how the place where people grew up evolved over time from a very rural community to a world class media center. There are some wonderful photos of young folks in it, in addition to some mind-blowing actual stories!

In your acknowledgments, you both reference the abundance of help you received from friends and family who live or had lived in Burbank during “the wonder years.” Can you describe the experience of working with those closest to you and reaching out to various facebook groups?

M: It is quite fun, we learn things from friends we knew, One chapter is written by our classmate and good friend Rob Avery who know a lot about Burbank people and had tales that needed to be told. We also posted to facebook Burbank pages and posed questions and as all good Burbankers are they were more than willing to help with what they knew. It was fun and informative many lent us not only their stories but photos also. It was great. And we get to see them at our book presentations all over town and we get more stories and more photos. Burbankers are the Best!

W: We managed to arrive at a wonderful community aspect to this book via Burbank-related Facebook groups and Burbankia website readers; we think it’s a fairly unique approach. We were able to pick and choose stories that painted a very broad picture of what growing up in Burbank was like. Burbankers are the best!

From the first page, it’s clear Growing Up in Burbank was a labor of love. How long did the entire process take?

M: The first book took the longest. But Wes is a master of organization and timing so this book took less time than the first and we started the third book in the middle of the second book so when the 2nd one came out we submitted the 3rd book and it was approved for publication while Wes and I were here doing the speaking tour in support of the book.

W: It helped that we were sitting on a lot of material from the website that we didn’t use in the first book – and yes, being organized helps, too! The proposal for the second book (with an outline of the contents) was sent to the publisher in late January 2017. We sent the manuscript and photos by early May! So just over three months of text and photo selection.

Lastly, is there anything you or Wesley want the people of Burbank to know about your book?

M: Wes and I loved our youth here in Burbank and I hope people will read and remember their time here also and people today will draw parallels to their lives today.

W: The second book is not just written for our generation or even the generation to follow. We’d like it to be like the 1944 Burbank Community Book in that it forms an enduring snapshot of a place, a time and a people. Will it still be read a hundred years from now? Perhaps! After all, there are many accounts and stories in the third book, Burbank Stories, older than that!