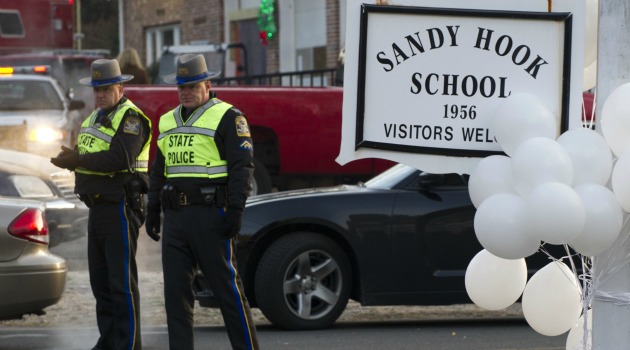 What makes Burbank different then Newtown?

One of the nation’s most evil tragedies has an effect on every American (or should) and it is time to make something positive out of pure ugly.

Sandy Hook Elementary School is no different then Stevenson Elementary school, or Washington Elementary School like Columbine High School is no different then Burbank or Burroughs High Schools.  Students in small communities wake up every day after a few prods from parents and make their way to school where usually the largest thing on their minds is a surprise quiz or if that certain girl/boy is going to notice them on that day.

When they walk in or their parents drop them off they do realize the amount of security already in place.  Most schools in Burbank have campus supervision people (like myself who occasionally works as a substitute) monitoring all the doors an hour before schools starts.  That, plus the administrators who are on constant patrol in the mornings as students arrive.

Once the day starts the schools is locked off to the public, with the only entry being through the main office where a visitor must check in, be identified, and issued a pass to be on school grounds.  No adult could walk on any campus for over 5 minutes without being challenged without the proper credentials.

This is about the same as in Newtown from what I hear. The 10 years I worked as a classroom teacher at Crespi High School nearly all the same rules were in effect.  It is about all a school can do.

So when I hear people say that we need to put armed security in schools I have a couple of thoughts.

Number one is how do we justify the expense of a security force at EVERY school.  Does that mean every nursery school, day care center, or place that houses over 10 students at once?  We can’t even afford to keep schools open and spend money to educate students.  Should we cancel the baseball team and put the money to a guard.  How about cancel all the music in schools to put in a security force.  They can put students though metal detectors, pat down students and put in spy cameras.

Forget schools for a second.  There is another place that NEEDS and does have armed security, banks.

Banks have money and are set up like a fortress, with many security measures in place including detectors, armed guards, and cameras.  So of course that stops anyone from robbing a bank right?  According to the FBI, there were over 300 bank robberies in the Los Angeles area last year.  Yea, armed guards really are a deterrent there.

We don’t need more security, we need a change of culture.  A school can have an armed guard (who can’t be everywhere at every second) who may not be able to make a difference.  When someone plans something, they may wait for the guard to look one way and then take him out.  Once that happens, your security guard is gone and now what is the excuse?  If someone wants to commit evil, they will go through locked doors and disobey rules, because they are no longer sane.  A sane person does not break laws because he scared that the one time he does, he may be caught.  When critical thinking is no longer part of the occasion, all rules are now off.

What is more alarming is the new culture that makes this more of a common tragedy everyday.  It seems these killings are done more and more by 20 to 50 year-old males.  It does not matter if they are in a big city or small town.  What is setting these people off?  While I do not play these roll p[laying video games, I do know in the last 10 years these games are getting more and more realistic with players walking through streets with all kinds of weapons shooting people over and over.  When you hear that every child in Newtown was shot anywhere from three to 11 times each, you wonder is there is a correlation.

But before you think I am going to blame video games for this, think again, they only deserve a small part of the foundation.

What do all of these killings have in common – GUNS.

I have really never been an anti-gun type guy.  I actually have a gun here in the house that my father carried on his side in WWII.  It is a revolver with six bullets in it (I think).  It is here because there is evil in this world and you never know when it is going to be your only line of defense.  But it is not an AK47, or some kind of gun that hold 200 rounds and I do not have 10 clips full of ammunition.  I am actually and always have been, completely scared of guns.  As a member of the media, I have covered so many violent shootings, that I just don’t even want to handle the thing.  And yes, guns go off accidentally even when trained officials have them.  I remember years ago in the old police garage on Third and Olive an officer accidentally  had his shotgun go off.  No one was hurt, and while embarrassed, it was something that stuck with me.

Gun violence is no big deal to most people.  Have you ever said or heard somebody say “Don’t ever go down to South Central or you may be in a drive by”?  Why is that a popular statement?  Because it happens all the time and we just seem to accept it.  As a member of the media, I see reports EVERY DAY of gunshot victims here in the Los Angeles area.  Aren’t we glad we don’t live in that neighborhood or that never happens here.

Burbank is a small sleepy town we believe.  That is because we have a police department that is on their toes 24 hours a day.  They respond to everything in force.  I listen to a police radio – it is amazing how many things go on in a single day that they handle in a quiet, professional way to keep the standard of living so high in Burbank.

When you listen to the President talk Sunday night at the Newtown Memorial, you could hear that maybe it was time we really need to reexamine our laws as well as our attitudes.

Maybe out two Congressmen (Schiff and Sherman) should start to make controlling guns a priority instead of helicopter noise bothering people.  Who is going to provide the leadership that will go down in history as taking a step to make all Americans safe?  Will that person or persons take heat?  Absolutely.  But are our leaders not suppose to lead?

Yes, our constitution gives us the right to bear arms and I am not saying that should be revoked.

We have the right to drive a car, but the government has made laws that say we may not exceed a certain speed.  We have the right to own a gun, but maybe it is time for limits to be put in place and real penalties for those who do not obey the law.  Why does one person need more then a pistol and rifle.  We outlawed ‘machine guns’ because of how many bullets they fired in how fast of a time.  Why do we need guns that hold 100’s of rounds?  Maybe we should have limits on guns and how many rounds they can fire.

Guns seem to be no big deal on the streets. We need to have laws that will send people to prison automatically if they are caught with a gun outside of their home.  People at Bob Hope Airport are being cited all the time because they had a gun in their suitcase and ‘forgot it was there’. Really?  You do not know you had a gun in your bag.  Are you really that careless – or stupid?  If you automatically went to prison for five years just for having a gun with you in public without a proper permit, you think your memory might improve a little?

In a recent ‘buy back’ program the Los Angeles Police Department performed back in May of 2012, there were 1,673 guns tuned in for gift certificates including a rocket launcher.

That was just in one weekend, just how many guns are just walking around with people on a daily basis the way stray cats hang out in neighborhoods?

We criticize Europe and the United Kingdom for a lot of things, but I have never heard them criticized for their gun laws.

We have guns because we have always had guns.  We use to have well funded schools and police departments that would sometimes be able to identify and handle problem people.  No matter how bad the economy is right now, Burbank schools do everything they can to help troubled students and the Burbank Police Department has put a Community Team together to identify and help troubled people.  But the troubled adults still have the right to go out and buy as many guns as they want.

And don’t be naive Burbank, we are a target rich community for some deranged individual to go off.  Beside schools and a mall, we also have major movie studios, television stations, an airport and many, many high profile companies.  Burbank studios were a reported terrorists at a point.  And while you may not think of it everyday, there are people at all of these locations that are prepared for it everyday besides our heroic Burbank Police Department Officers.

Maybe we should put that security money into schools for education.  After all, while we lead the world in gun violence, we seem to be coming in worse and worse every year in science, math and general education.

I welcome your feedback.