Handle With Care offers an immensely charming romantic comedy that’s as moving as it is mirthful. Playwright JASON ODELL WILLIAMS has succeeded brilliantly in infusing Handle With Care with “humor and heart,” where the serious collides with the comedic “like in real life.” Kudos too go to Director KAREN CARPENTER and her cast of pros for giving us this delightful and heartwarming holiday gift. 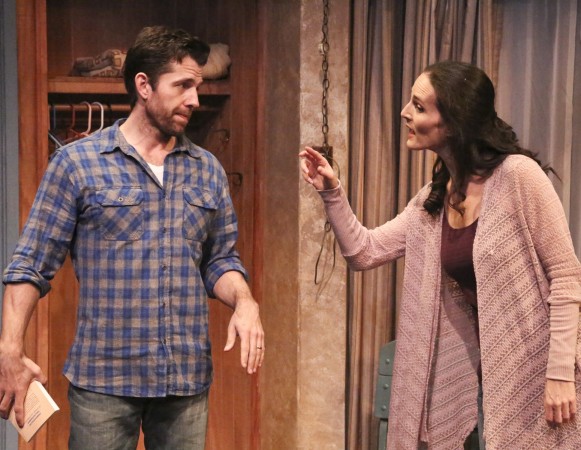 It’s Christmas Eve, 2008, in a cheerless motel room in Goodview, Virginia. The statuesque Ayelet (CHARLOTTE COHN) is unleashing a torrent of Hebrew at the hapless Terrence (JEFF MARLOW,) a DHL driver who has managed to lose her grandmother’s body. In desperation, Terrence has summoned childhood friend Josh (TYLER PIERCE) to somehow help him out of his fix. But, a few desultory weeks at Hebrew school notwithstanding, Josh knows very little Hebrew. And Ayelet knows very little English.

In flashback scenes of the day before, we learn that Ayelet’s then-alive grandmother Edna (MARCIA RODD) had been dragging her to one obscure Virginia town after the other rather than to the usual Washington D.C. or New York City landmarks. It’s an odd itinerary for an Israeli granddaughter’s first-time trip to America, even with Edna’s ostensible desire to acquaint Avelet with the “real America” beyond the tourist attractions. 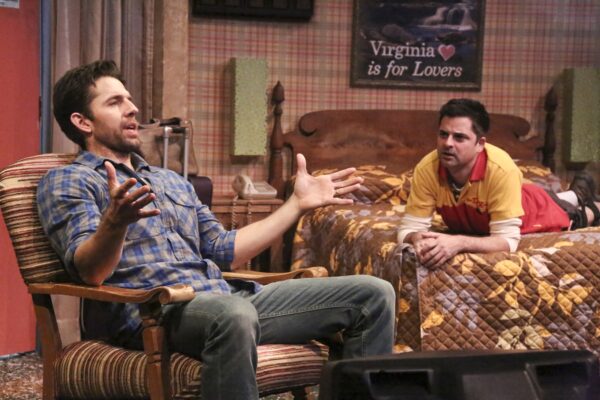 Ah, but of course there’s much more going on.  A clue hangs over the bed of the motel: a poster proclaiming that “Virginia is for lovers.” And as Handle With Care unfolds like a blossoming red rose, Goodview on Christmas Eve becomes the locus of loves lost and found.

Seemingly, Terrence is as unpromising an angel to Josh as Clearance was to George Bailey in It’s a Wonderful Life, a classic holiday film that’s slyly referenced during the play. But Terrence’s earnest and good-hearted boobery makes for heavenly mirth.  Edna is a compelling angel to Avelet and, like Clearance did with George Bailey, makes her aware of what might have been and what could yet be. 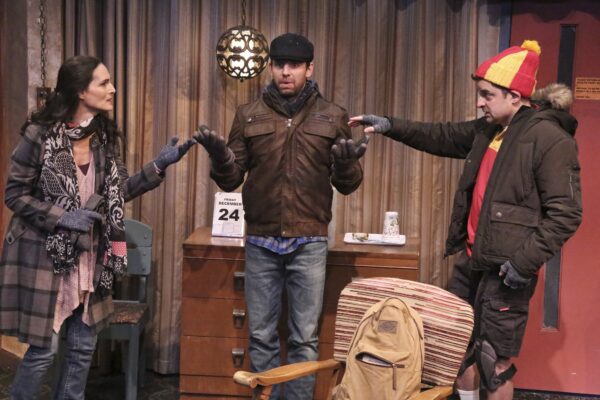 Terrance and Edna make a fitting frame of sweet synchronicity for a romance as charming as it is original. Josh and Avelet paint a picture of holiday magic, with an on-stage chemistry that makes speech superfluous. And if you think Cupid’s arrows could never be loosed during a religious ritual, think again. When Avelet, breathtaking in her form-fitting dress of Yuletide red, lights the two Shabbat candles, another pair of fires are being lit as well.

Actor Charlotte “looks for something special in the person I’m acting with” and she and Tyler have “known each other for years.” But in truth, words don’t adequately convey how Charlotte and Tyler achieve what they do on stage as Avelet and Josh.  The shared experience of actors at the top of their game is not common enough to easily enter the common understanding. But we in the audience are more than content to experience the result of their superb craft: a memorable reminder that “love at first sight” can and does happen, even if all too rarely. 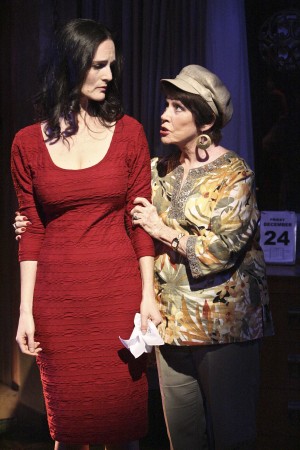 In his book Religion For Atheists, philosopher Alain de Botton laments that his fellow atheists have thrown out the baby of community-affirming rituals out with the (to him) bathwater of religious claims that can no longer command belief.  This predicament also applies to many people like the play’s Josh, whose religious experience fell between the cracks of his parents’ two very different traditions. But as Jason points out in his program notes, his character Ayelet well understands the importance of ritual: “Shabbat. Celebrate. Life…And family.” And, we might add, “love.”

Handle With Care continues through Sunday, December 14 at The Colony Theatre, 555 North Third Street (at Cypress) next to the Burbank Town Center Mall. Performances are Thursdays and Fridays at 8 p.m., Saturdays at 3 p.m. and 8 p.m., and Sundays at 2 p.m. (There are NO performances Thanksgiving week.) Ticket prices range from $20 to $49, and group discounts are available. For tickets, call the Box Office at (818) 558-7000 ext. 15 or visit www.ColonyTheatre.org.