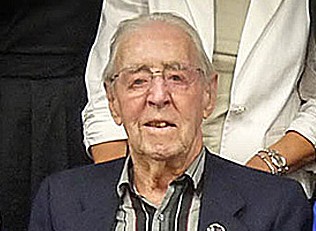 Harry L. Strickland, a former Burbank police detective who had investigated a case involving gangster Mickey Cohen, passed away Aug. 3 in his Burbank home. He was 100.

Born March 18, 1915, in Forest Hills, N.Y., Strickland moved with his parents and brother Dale to California in 1923 and lived in North Hollywood until they came to Burbank in 1938. While growing up, he was a member of the Boy Scouts and achieved the Eagle Scout rank.

One of his most memorable cases was in the late 1940s and involved gangster Mickey Cohen and then-Police Chief Elmer Adams, who resigned amid allegations he was tied to Cohen and organized crime.

In a newspaper clipping from the museum’s files, Strickland explained how Chief Adams had sent him and his partner, Sandy McDonald, to check out possible gambling activity at the Dincara Stock Farm, a horse stable on Mariposa Street and Riverside Drive. Without police backup or radios, the two policemen walked into a packed casino outfitted with craps tables and roulette wheels.

It was Cohen himself who came down to the police station to ask Strickland and his partner about the three arrests that were made and what the chief had told them.

That was a scary time, said his wife, Mary Jane Strickland. Many nights Harry Strickland was called back into work for a homicide or other major crime.

“I would lie in bed with my eyes wide open. It was hard to go back to sleep,” she said.

His last case with the police department, Harry Strickland had gone to suspect’s home, and the suspect opened the door and aimed a 45-calibre gun at his head, Mary Jane Strickland said.

A wall in the museum is devoted to his law enforcement career. There are news clippings of cases Harry Strickland investigated along with early photographs of the Burbank Police Department.

Following retirement from the police department, Harry Strickland became a criminal courts coordinator for the Superior Court in Los Angeles, a career that lasted for 12 years.

Not ready for retirement, he and his wife founded the Burbank Historical Society and built the Gordon R. Howard Museum in Izay Park. He continued to maintain the museum complex well into his 90s.

Harry Strickland’s father was an architect and the younger Strickland became proficient in woodworking, which was advantageous when he and his wife acquired a house built in 1887 and had it moved to Izay Park. The Victorian Mentzer House was the beginning of the Gordon R. Howard Museum complex located around the corner.

He practically restored the little house by himself, his wife said. Over two years, he painstakingly refurbished the gem. He scraped three layers of paint off the outside walls, replaced kitchen tile and wallpaper and installed bathroom plumbing fixtures true to the time period, which were donated by Warner Bros.

The society had a tight budget, so members had to be creative. There were two houses of similar style on Orange Grove set to be demolished, so Harry Strickland and six friends extracted parts from it and repurposed them into the Mentzer House.

Mary Jane Strickland remembered the front window had been blown out during a heavy wind storm and her husband had replaced it with a window from one of the other homes.

Harry Strickland also was the contractor on two of the Burbank family’s homes. He would always check the framer’s work and if the board weren’t straight, Harry would correct them himself, his wife said.

“He was a perfectionist,” she added.

The couple had had a whirlwind romance. They met one evening at a popular night spot in Burbank. Mary Jane was with a girlfriend and Harry was with a police buddy. They ended up taking an impulsive drive to Hollywood and then came back to the Valley for dinner. Mary Jane didn’t plan to see him again, but the next day, he stopped in at Ervin’s Jewelers where she worked.

“I looked up and here was this wonderful looking guy in his suit and hat working for the police department,” she said, adding that she was so surprised to see him. He looked so sharp and his manner was gentle and kind — so different than the rowdy persona from the night before.

“He kept asking me to go out to dinner, and finally I went out with him and the first date I had with him, I was hooked,” she said.

The couple love to travel and they owned homes in Mexico and Mount Shasta. Harry Strickland played tennis and golf and they had a pool so he enjoyed swimming.

“One thing I remember most, there was a brick yard at the corner of Glenoaks and Frederic,” she said. “He was a security guard there at night and would park his old Plymouth there. I would go with him on this stake out and he would teach me to drive.”

He had a sense of humor, although it was a dry one.

The couple would take Penny to the dances at Olive Recreation Center and she warned them not to pick her up in the old Plymouth.

“Of course I’d come out from the dance and they’d be sitting out front in that old beat-up Plymouth. I was so embarrassed and they just thought that was so hysterical,” she said.

He loved his grandchildren. He carved wooden rocking dinosaurs for his grandsons. He put a leather seat on it and red reins and crystal eyes.

“My dad was fabulous with woodworking,” Rivera said. “One day I came home and I found out he had built shelves in the corner of my room for my dolls. I didn’t know he was doing it until I came home.”

Harry Strickland was a detective when Glen Bell came on the force in 1955. Bell is a former Burbank police chief and motorcycle officer.

Bell once came up and helped Harry Strickland when he was applying wooden siding to one of the family’s houses he was building.

“I said I’d come up and help him and we nailed siding on his house for a couple days,” Bell said. “He never forgot that. Like it was such a big deal. He couldn’t believe I would do that.”

In lieu of flowers, make donations to the Burbank Historical Society or a favorite charity. A memorial service will be at 11 a.m. Aug. 15 at the Gordon R. Howard Museum. Parking is available in the lot at 1100 W. Clark Ave.