So many teenagers that play sports dream of earning a Division 1 college scholarship that will play for books, tuition, room and board for four years.

Burroughs High senior Faith Boulanger is a 6-foot-1 returning All-CIF girls’ basketball. She envisions playing her sport beyond after her time at Burroughs.

But she takes a very mature approach and isn’t concerned about playing for a Division 1 college. She is looking at preparing herself for life after as she aspires to either study film or pursue a degree in athletic administration.

“Division 1 would be greatly financially, but personally I would prefer going Division 2 because that way I’m able to have more of a college experience,” she said. “With Division 2 there is more time opening so I can go join a sorority or join a club and be a part of more stuff on campus. I don’t want to be at the school just for basketball. I’m there for the whole experience.”

Because Division 1 athletes in many sports like basketball have everything paid for, Boulanger realizes it also comes with a lot of sacrifice and limits one’s ability to have more personal freedom.

“Division 1 is always an option. If I got a D1 offer, I would look into it,” she said.  “Most of the schools that have shown interest are Division 2 schools.”

Boulanger said Cal State San Bernardino is one of the Division 2 schools that has shown the most interest. She said Concordia University has also shown interest as well as Pepperdine, which plays Division 1.

“I’ve been in contact with them a lot through the entire process,” she said of Cal State San Bernardino. “I want to take my time to look at every school that shows interest. It is where I am going to be the next four years of my life and I don’t want to just a pick a school because they have a good basketball program.”

For now, Boulanger is trying to stay to fit along with her teammates in hopes of emerging from Covid-19.

“With Burroughs we started doing workouts via Zoom. The whole team will get on a Zoom call and we do conditioning over Zoom. Every other day we do conditioning and on the days we don’t do conditioning we’re shooting. We’re still getting shots up, we’re still working on ball handling. Of course it is not the same. We’re not going to be in as good of shape as we are usually, but we will be in okay shape for when we do start up again.” 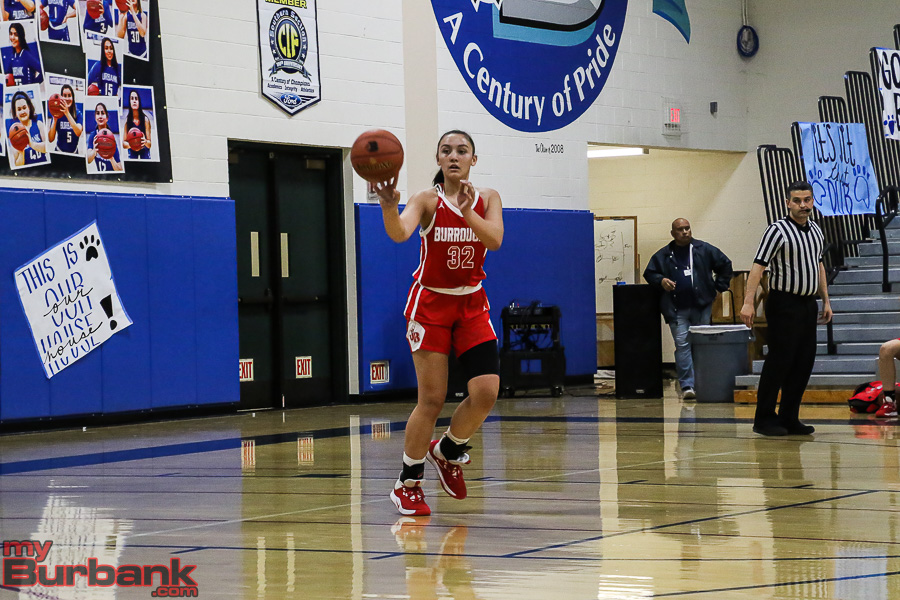 Longtime Burroughs coach Vicky Oganyan said she has been blessed to have coached Boulanger the last three years.

“She is a difference maker for us on the court and we are able to play her at multiple positions based on our team needs.  She has handled pressure at the point guard position, has played on the perimeter as a shooting guard, and also has scored in the paint,” Oganyan said.  “She led our team in scoring, rebounding, assists, and blocks this season.  Faith has really embraced working with her teammates to continue enhancing our Burroughs culture.  We are most proud of her growth as a person and player and looking forward to what is to come her senior year.”

Boulanger, like so many, is curious to see what will happen with the upcoming high school sports season.

“Our coaches have said that we will probably start in January.  It will be interesting to how it all goes down,” she said. “The worst thing that could happen is not having a season at all, which I know for us seniors, we would be completely devastated.”

Boulanger is easy to please. She just wants to have another chance to play against her main league rivals in Burbank, Crescenta Valley and Pasadena.

“The crowd was energetic and we were pumped up,” she said of the games with Burbank.

Faith Boulanger may never play basketball in front of a televised audience and she’s fine with that. She would rather set up a path for herself that leads to success in life after basketball.