To mark the 40th Anniversary of its founding, the Burbank Historical Society honored Mary Jane Strickland and her husband, Harry (better known as Buddy), at a gala dinner at the Gordon R. Howard Museum. 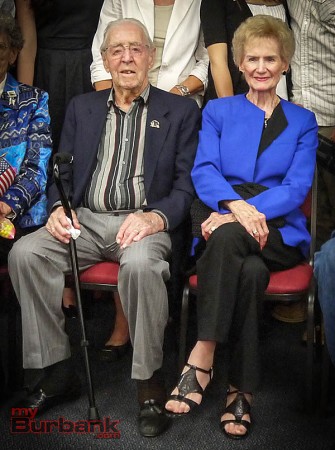 Guests at the dinner were treated to a slide show showing many of the important milestones in the history of the society — most of which were in one way or another attributable to the efforts of the Stricklands and the many people Mary Jane has “recruited” as members.   Probably most notable of Mary Jane’s “recruits” was the late Gordon R. Howard.  Through the generosity of Mr. Howard and his wife, the society has the museum complex that bears his name.

When the society was in its infancy, Mr. Howard donated a Moreland bus and truck to them.  The two vehicles were not only old, but historically significant.  They had been built at the Moreland Truck factory which used to be located in Burbank at San Fernando Road and Alameda Avenue.  Mr. Howard’s generosity continued with a donation of property, the proceeds from which allowed the society to build the museum in 1983.   It also houses antique vehicles from Mr. Howard’s collection.

One project close to Mary Jane’s heart was The Mentzer House.  Built in 1887, it was located on Palm Ave. where the Police and Fire Headquarters are now located.  It was moved to its present location on Olive Ave. in George Izay Park in 1979.   Jim Woodburn, who was he City Engineer and also president of the society in 1979,  recalls the house’s arrival.

“I escorted the house over the Olive Overpass at 3 a.m.,” said Woodburn who spent many hours helping restore the house with other volunteers.  “There were other similar houses being demolished so I was able to salvage windows and other architectural elements for the house.” 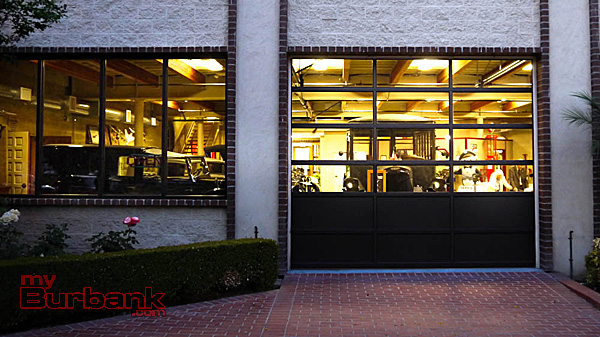 The Gordon R. Howard museum, site of the gala dinner honoring Harry and Mary Jane Strickland, is open to the public every Sunday afternoon. (Staff Photo)

Although the society’s museum is filled with items from the city’s past, so much more is stored in the memories of people like Mary Jane and Harry Strickland.  “You need to listen to your parents and their parents,” said Mary Jane, who is a wealth of Burbank history in her own right.  Her parents moved to Burbank in 1913.  Her father, George R. Cole was Burbank’s first Chief of Police, assuming the office in 1920. Although the family home was located up on E. Palm Ave. in 1924, Mary Jane was born in Texas.  Her parents were in Texas due to her father’s job as a Prohibition Agent for the Treasury Dept. Luckily for the residents of Burbank, present and future, she returned back home to Burbank shortly after her birth.

Harry Strickland’s Burbank roots go back a long way, too.  He was a Burbank Police Officer, who is credited for exposing the mob influence in Burbank back in the late 1940’s and early 1950’s.   During their 63 years of marriage, Harry and Mary Jane have been a team.

“Mary Jane comes up with the ideas,” said Harry, “and I try to make them happen.”   Back in 1979 when the Mentzer House arrived, Harry was right there with other volunteers restoring the house.  “For three years after I retired I did nothing but work on the Mentzer House,” he said.

“Harry has put more time in than the rest of us combined, “ noted Gary Sutliff, a board member of the society.

The efforts of both Mary Jane and Harry Strickland have not been lost on the community.  “They are what ‘dedication’ means in the dictionary,” said Sutliff.  Those sentiments were echoed by others at the dinner.   Mayor Dave Golonski, as one of his last acts as mayor, spoke on behalf of the City of Burbank.   “ I want to give you a really big thank you on behalf of future generations for this slice of history that they would have never seen if it were not for your efforts and the efforts of others,” said Golonski, adding, “You were the inspiration.”

Former Mayor Vicen Stefano told the audience, “Harry, you were a great cop.  You two are great public servants.”

The couple’s nephew, Randy Strickland, a minister in Mesa, Arizona, summed up the evening.  “They are our heroes, genuine heroes.,” he said.  The audience rose to their feet to honor the couple.

With 40 years of dedication to the Burbank Historical Society, Mary Jane, 88, and Harry 98, have cut back on the time they spend at the museum, but her daughter and son-in-law, Penny and Tony Rivera, are there following in Mary Jane and Harry’s footsteps.

With a museum complex, filled with many exhibits and an outstanding car collection, that has become one of the biggest assets in the community, Mary Jane was asked what her proudest accomplishment is?  It wasn’t the well preserved artifacts, the beautifully restore house, or the building where the dinner was held.   “Collecting and preserving Burbank’s history,” said Mary Jane, “That was my goal, and we have pretty much accomplished that for future generations. 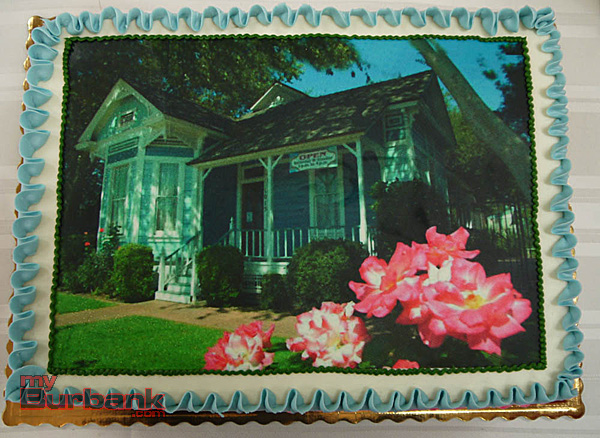 Cake featured image of the Mentzer House, which saved from the wrecking ball in 1979, and is now part of the society’s museum complex. (Staff Photo)