IKEA could be moving soon.

If it does, it won’t go far. Just a little more than a mile south.

And if it is constructed, it will be the largest IKEA store in the U.S., the company said.

The current store near the mall will eventually close once the new site on South San Fernando is developed, which could be by fall 2016.

The City Council is scheduled to discuss the project February 25, after the Planning Board recommended its approval last month.

The project consists of almost 23 acres and 15 parcels of land, according to a city staff report on the project.

Twenty two structures will be demolished, or the equivalent of almost 465,00 square feet, the report states.

At roughly 470,000 square feet, the new store will be almost double the size of the existing store.

IKEA in Downtown Burbank is one of the company’s higher performing stores, but suffers from parking and circulation “challenges” and the loading area is insufficient, Joseph Roth, a spokesman for IKEA, said about the reasons behind the proposed move and a new store at the January 13 Planning Board meeting.

The existing store isn’t visible from the highway and IKEA would like customers to have quicker access to the store, Roth said.

Finding the closest entrance to IKEA on your first visit can indeed be challenging. Additionally, pedestrians park away from the store and have to walk across a busy corridor of cars wanting to access other areas of the mall.

This matters, Roth said, because “sales will taper off.”

It would mean limited sales growth for IKEA and limited growth in tax revenue for the city, he said.

“Relocation is the only viable option,” Roth said. “It improves the customer shopping experience, grows our presence and keeps us in the city.” 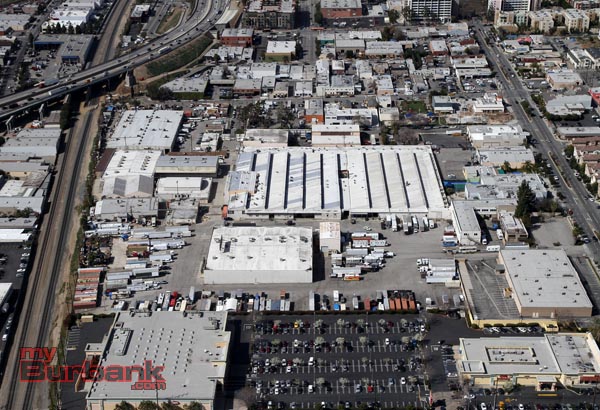 The site IKEA would like to move to is located off San Fernando Boulevard, south of Downtown Burbank. When completed, the IKEA would stand next to the existing shopping center that houses a Ralph’s and Starbucks, among other businesses, near Alameda Avenue.

The main entrance to the store would be from First Street, which would be extended from Santa Anita Avenue, where it currently dead ends, to Providencia Avenue.

First and Providencia would be the main vehicular entrance, and the store entrance would face the freeway.

The new store would have a First Street address, and IKEA would promote the Olive Avenue exit from the freeway, to encourage access from First, store representatives said at the meeting.

Another entrance would be located just west of the main entrance, at Providencia and Bonnywood Place.

A new, signalized entry would be located at San Fernando and Elmwood Avenue, which would be the back of the store. IKEA delivery trucks needing to unload would also enter from San Fernando, but unloading is scheduled to take place during non-peak hours, the staff report states.

Loading for home delivery trucks would take place near the front of the store.

IKEA representatives noted that all customer loading will take place on the site, and that customers could take their carts to their cars, just as they do at other newer and larger IKEA stores. 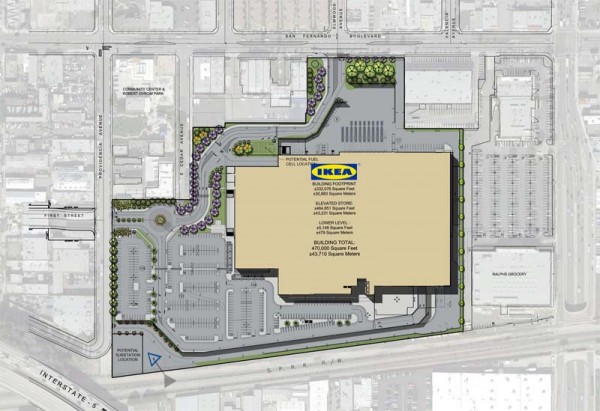 An existing driveway just south of Elmwood on San Fernando could also be an entry and exit option as there are no restrictions on who can use that driveway, although it is primarily intended for use by the future owners of 811 S. San Fernando, a building that is currently for lease, Patrick Prescott, deputy city planner, said.

In approving the project, Planning Board members noted that the main entrance to IKEA would be from First Street and said that with the proposed improvements, including remediation of the soil, they were satisfied that impacts on the area would be mitigated.

Members of the board, however, took issue with a 108-foot tall sign that would be visible from the I-5 freeway, and the project was approved without the sign.

No relocation assistance will be offered to the business owners, and IKEA representatives said tenants have been aware of the project for some time and have been paying below-market rent.

In addition to traffic improvements, other enhancements include wider sidewalks on San Fernando and near the project entrance, as well as an additional turning lane from eastbound Alameda to northbound San Fernando.

IKEA plans to place solar panels on top of the rooftop parking, and will offer 1,726 parking spaces, more than the city requires, in addition to a lower parking area.

Details of the soil remediation were not discussed, although IKEA’s remediation expert said the California Regional Water Quality Control Board had a plan in place that IKEA would implement. Buildings and soil would be removed and the water board must give its approval for IKEA to refill the site. It was noted that remediation at the site has been on-going.

Roth said that should IKEA receive approval, they will then close on the land and be able to purchase it. He said IKEA does not disclose the purchase price or the cost of the project.

He would only say that the project cost was in the millions.

The City Council meeting takes place at City Hall, and begins at 6:00 p.m.


Editors Note: The hearing has been rescheduled for March 11 at 6 pm 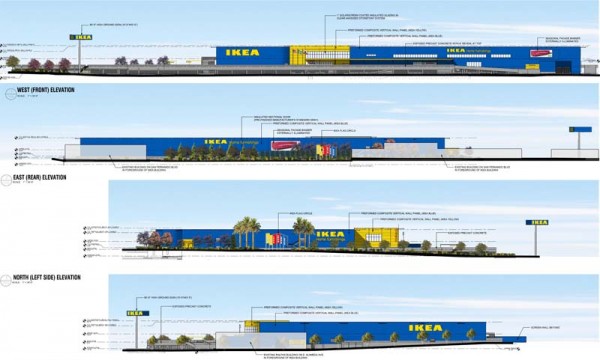