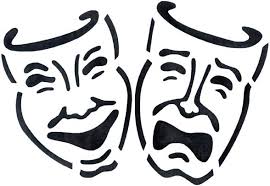 Inside Out is great fun. From the intimate stage of the Grove Theater Center, six women gave us one sassy session of entertainment therapy. Their “hot singing time machine” takes us back to the pre-Internet 80’s, when group therapy was breaking into the mainstream. Kudos to DOUG HAVERTY (Book/Lyrics) and ADRYAN RUSS (Music/Lyrics.)

Sage (ADRIENNE VISNIC) is a New Age flower child, and love doesn’t seem to be in her Tarot cards.

Liz (SANDY BAINUM) is a top executive whose career success takes her into uncharted territory with her husband.

Chlo (STEPHANIE FREDRICKS) is a gay single mom who’s put her love life on hold, and that’s getting really old.

Molly (DANA MELLER) is a traditional mom struggling to shed pounds and other things weighing her down.

And then there’s Dena (LESLIE STEVENS,) hoping to sing her way back to the stardom she enjoyed in her youth.

Their love lives are a battlefield. And the audience knows that these very different women will, by the end of the play, become a band of sisters. The fun is in the journey, and under BRUCE KIMMEL’s direction, Inside Out makes sure that each advance from squabbling to solidarity is well-earned.

And also well sung. The actors achieve the very difficult feat of making their singing technically good, emotionally compelling and at the same time consistent with characters (excepting Dena) that aren’t supposed to be professional singers. Kudos to Musical Director ALBY POTTS as well to drummer/percussionist TYLER SMITH.

In the program materials, Doug tells us that he debated whether to update Inside Out. Bruce Kimmel “encouraged us to leave it in the 80’s and embrace it as a period piece.” Bruce was right. Except that Doug and his creative team have also created a work that celebrates an emerging period in human society, one that was underway by 1995, (the year “when the future began”, according to author W. Joseph Campbell) when the Off-Broadway production of Inside Out was garnering high praise.

The emerging period may well be one where a “new tribalism” will increasingly take over from traditional civilization. In Beyond Civilization, Daniel Quinn points out we humans had lived in tribes for tens of thousands of years. Then for some reason—perhaps agriculture—we decided to give civilization a try. With depressing regularity, civilization features a few at the top lording it over the many at the bottom, and often fouling a lot of nests in the bargain. More and more people are ready to try a different arrangement, which is good, because the current set up may not outlast this century.

But, is there anything “beyond civilization” besides some version of The Road or Road Warrior? Quinn sees a “new tribalism” of clan-sized groups of people united by purpose rather than genes. His vision came into focus when he saw that the circus “is in fact organized in a way that is authentically tribal.”

At first, those Inside Out gals in group therapy thought their sessions were a circus, but they ended up creating a “Quinn circus.” Inside Out captures group therapy as a pioneering effort of ordinary people to create their own local ecology of human flourishing.

If we’re lucky, civilization as we know it will gradually give way to Tribe 2.0. The “exponential technologies” celebrated in Peter Diamandis’ and Steven Kotler’s Bold may wind up empowering millions of small groups rather than a few huge conglomerates a la Continuum.

The shift away from the present scheme of things won’t be obvious at first. For example, when computers first appeared, they were used to make existing business processes go more efficiently. They whirred and blinked in large companies only–in special rooms with curtains dramatically revealing their wizardly presence. It wasn’t until computers became a lot more democratic that they began to create entirely new business processes.

And so it was with Tribes 2.0. At first they’re very exclusive and curtained off from the hoi polloi, like Lockheed’s Skunk Works or the Google version or the Apple version. They’re used to make existing civilization more efficient what it does.

Or, like the women in Inside Out, to better navigate the man’s world they find themselves in.

But, as Tribes 2.0 become more widespread, they begins to create an entirely new type of society.

And that’s the hope behind Inside Out. It’s not just genius geeks that can band together and do something wonderful. It’s also people from all walks of life—even people whose gender had limited their opportunities until the recent past, and who don’t quite know how to address the wider range of choices now available to them.

Inside Out is the counterpoint to Ayn Rand’s Atlas Shrugged.            In Rand’s novel, the best brains of society gathered in Galt’s Gulch and became in effect the Skunk Works for a society that needed some serious re-tooling. Who doesn’t want to soar with eagles and leave the turkeys behind? That’s the forlorn daydream of every competent person in a mediocre organization.

But how is it that only a small percentage of humanity is firing on all cylinders? As the legendary Ingo Swann pointed out, in every other species the great majority of its members are in equal possession of their powers. So how were so many of us disempowered? Perhaps it’s being in a society based on maintaining dominance hierarchies: the exploitation of the many by the few. (To see how disempowerment works in the typical classroom, look up the essays of John Taylor Gatto.)

It’s not “Atlas shrugged.” It’s Atlas mugged, mugged from an early age. Inside Out shows how one group of women decided to suffer themselves into existence rather than out of it. They squared off with each other and traded blows of honesty that healed the bruises in their souls. Atlas healed…or at least starting to.

Doug has the last word: “… there is an uncommon strength to be gained in communal sharing.”

Inside Out continues at the Grove Theater Center (in Burbank off Clark just east of Mariposa) through Sunday, March 22. Fridays and Saturdays at 8 p.m. and Sundays, 2 p.m. General admission, $25; seniors and students, $15. Running time is 120 minutes with one intermission. For tickets, call 323-960-1055 or visit www.plays411.com/insideout.