West Side Story tells of “two young lovers caught between prejudice and warring street gangs in the musical retelling of Shakespeare’s Romeo and Juliet.” Set in New York City, the Montagues and Capulets become the rival street gangs, the Jets and the Sharks. Star-crossed lovers Tony and Maria update the tragically doomed tale of Romeo and Juliet.

The musical score continues to be regarded as one of the “best ever written” with classic songs including “Tonight,” “Maria,” “America” and “Somewhere.”

“This show has been an exhilarating experience!” commented Myers. “The students have been so dedicated throughout the rehearsal process, keeping up with our amazing choreographer, Jennifer Stanley, as she challenges them with difficult Jerome Robbins’ style dance routines.”

“Mr. Jennings, our vocal director, and I have been wanting to produce West Side Story for a long time and have been waiting for the right mix of triple threat actors to make this production the best it can be!”

“Our experienced tech crew, led by Jon King, will be assembling a professional two-story revolving set that promises to wow audiences, and our mostly student orchestra will be led by our instrumental music teacher, Taylor Arakelian,” added Myers. “This is a show that you won’t want to miss! I bet people are going to want to see it more than once! It’s a classic!”

“I’d just like to say that every production put on by the JBHS Drama program has an incredible level of professionalism and care that is amazing to be a part of every single time I’m lucky enough to be [part of],” commented senior Coen Sosa, who plays Tony.

“The acting and songs in this production are more difficult than what I’ve had to do in the past, so this production has definitely given me many opportunities to expand as an actor, singer and performer which I’m very appreciative of.”

“My absolute favorite part of any production is the people that I get to share the experience with. It’s so fun to see everyone else grow into their role and continue to put their all into making the production its best.”

“I would also like to comment on how amazing Arya Desai is as Maria,” Sosa added. “Every single time we have a scene together, even if it’s only the first time running through it, she finds a way to capture the emotion and the passion behind each word she’s saying. Which just makes my job a thousand times easier when you’re working with someone that talented.”

“I’m so excited to be a part of such an amazing production of West Side Story, and that I get to play an iconic and beloved role,” commented Desai, a JBHS junior. “I definitely feel that I’ve connected to Maria and learned a lot about myself along the way!”

“The school and the drama program has been so dedicated to telling the story the right way, and I think it definitely shows through the effort put into the set, outfits and performance of each individual. I’m so proud to be a part of this story, considering the important message which it carries, especially in this day and age where racial tensions are rising again.”

“This show has a special place in the hearts of everyone involved and the directors who’ve put it on. I can’t wait to see how the public reacts to the show, and what it will mean to all of the ethnic minorities which have been put in the backseat for much of musical theater,” she also said. “The show will be a challenge to all involved, but it’s one which will prove the versatility of the JBHS performing arts programs, and an experience I will cherish forever!”

“Working on West Side Story has been an incredible experience,” commented student producer, junior Wyatt Wheeler. “It has been my first experience with a musical, and producing it has allowed me to see the inner workings of the program and appreciate the hard work people like Mr. Myers and the rest of the creative team put in, and the hard work shows in the quality of the work we put out.”

“I have enjoyed every minute of the process, and I hope that everyone who sees the show has as much fun seeing it as we had putting it together.”

“I have so much love to give to Mr. Myers and the drama program at Burroughs,” added senior Trenton Rogers, who plays Riff. “This production has been one of the most amazing experiences I have ever had since West Side Story has been one of my favorite shows since I was a kid, and the cast and crew have made the experience a million times better. I cannot wait for people to see what we have in store!” 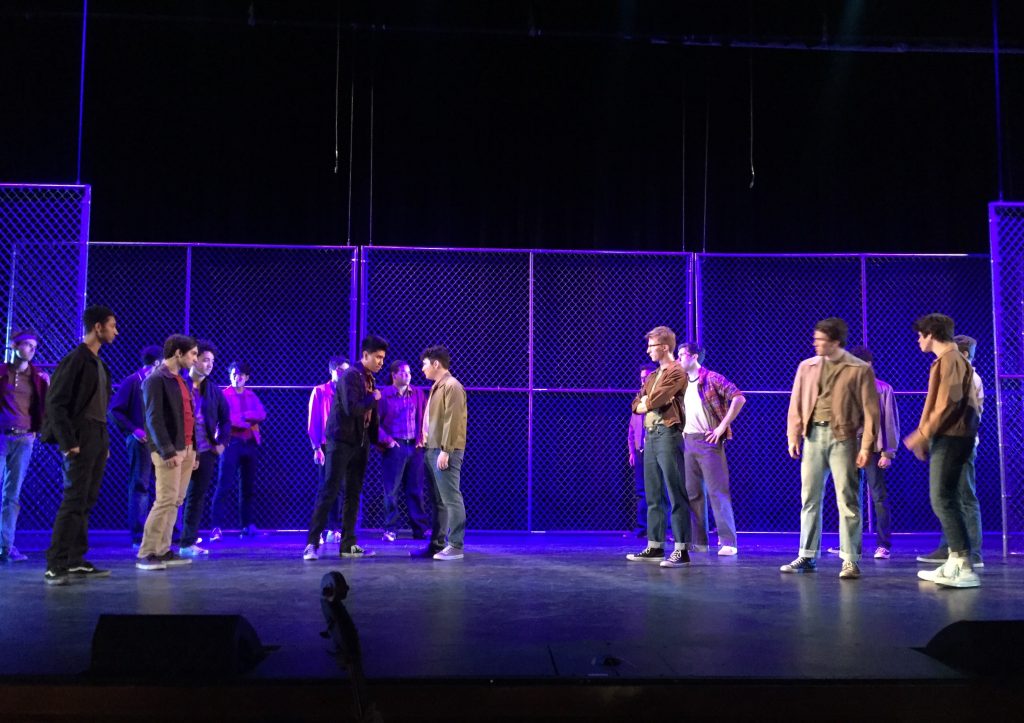 “As one of the Jets (the greatest gang since the T-Birds from Grease), I have been lucky enough to spend countless hours with some of the most talented and raucous boys on the Burroughs campus,” said senior Jack Weerts, who portrays A-rab. “Trenton Rogers and Coen Sosa, playing the parts of Riff and Tony respectively, have been so much fun to work with, and I could not have asked for a better group of guys to rumble with.”

“The JBHS Drama and VMA department are well known for putting on professional-grade productions and this one is definitely among the best. Under the direction of Guy Myers and Brendan Jennings, I can guarantee that this is a show you won’t want to miss, and we’ll have you snapping right along with us by the end!”

“While I’ve been participating in the drama program since I was a freshman… this is the first time I’ve assisted in the musical theater program,” said senior student producer Zachary Hagen-Smith. “West Side Story is easily my favorite musical we’ve done.”

“Firstly, the music is incredibly coordinated and articulate even without lyrics, conveying narrative through solely instrumentals,” he also said. “Beyond the soundtrack’s quality (which spread evident given the Bernstein-Sondheim collaboration), the story of Tony and Maria is a compelling one that spoke to civil rights issues of the 1960s and still speaks to current debates about immigration, renewed racist movements and urban violence. It is truly a timely piece and I hope to do it justice.”

West Side Story runs for three shows: Friday and Saturday, February 8 and 9, at 7:00 p.m. and Sunday, February 10, at 2:00 p.m. General admission tickets are $10 for students/seniors/children and $20 for adults. Tickets may be purchased online here or at the box office window ahead of the performances.

The John Burroughs High School auditorium is located at 1920 W. Clark Avenue in Burbank. Plenty of free parking is available in adjacent lots and on surrounding streets.