John Burroughs High School has certainly had its share of celebrities as alumni since that first graduating class in 1949, but one class has always stood out because of their Prom. 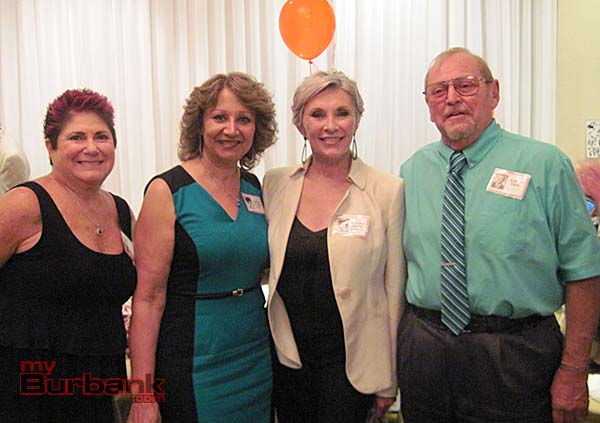 The Class of 1963 will forever be remembered for President John F. Kennedy attending their Senior Prom back in June of 1963.  Last Saturday night, as the class celebrated their 50-year reunion, the excitement of that night long ago was recalled.  It was a night that none of those in attendance will probably ever forget.

It was an event that almost didn’t happen.  Two years before the prom, the class had signed a contract with the Beverly Hilton Hotel (at the time probably one of the swankiest hotels in town) to hold the prom in their largest ballroom.  With a class of over 500 students, they needed a big room for the event.  A couple of weeks before the prom, it was announced that President Kennedy was coming to town for a fundraiser to be held at the hotel.   The Democrat Party wanted the largest room, so the hotel “bumped” the class of 1963’s prom.   Of course the seniors in the class of 1963 complained.

Some pundits in the media called the seniors “spoiled kids” for wanting the room when the President of the United States needed it.  They sort of glossed over that it was a fundraiser.  Fortunately, the appeals reached all the way to the White House, and Mr. Kennedy told them to let the kids have their prom.  His fundraiser was moved to several smaller rooms, and he simply moved from room to room to great the guests.

It was quite an affair.  I remember arriving at the hotel with my date, and wondering why there was such a big crowd gathered behind barricades as we entered the hotel.  I thought our prom must have be a really big deal, until I remembered that the President was going to also be at the hotel.

Senior Class President Tom Giuffrida added some details to the evening that most had never heard.  He recounted how he almost didn’t make it to the prom on time.

“We double dated with another couple, and of course we had to have pictures taken by four different sets of parents.  By the time we visited all four homes, we were almost late arriving at the hotel,” said Giuffrida.

“We dicided to go with the second agent,” said Giuffrida.  There is a famous photo of Giuffrida and other student government officers presenting the platter to the President.  Mr. Kennedy addressed the students, telling them, “Next to being President, in fact, rather than being President, I’d prefer to be a senior at John Burroughs.”

Jack Benny was there with the President that night.  Giuffrida recalled how the famed comedian, who was know for his frugality, commented that he’d rather be at our prom since we only paid $18 a couple for the tickets, and he had paid $100 a plate to dine with the President.    Just as a side note, the tickets for the 50-year Reunion were $120 per person.

About 150 alumni and guests were present Saturday night at the Sheraton Universal Hotel.  The walls of the room were lined with memorabilia.  Class photos from elementary school, junior high, and high school were on display.  Sadly, there was a large poster listing the names of classmates who have died since that day 50 years ago when the class of 1963 marched onto Memorial Field for graduation ceremonies. 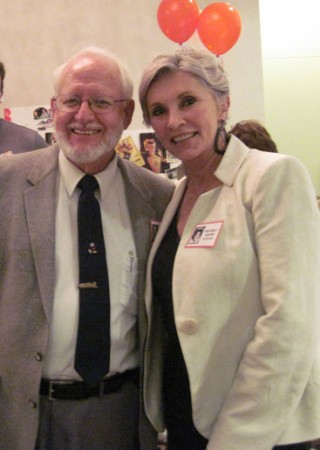 Classmates, Stan Lynch and Beverly Adams Sassoon, talked about the “good old days” at Jordan and Burroughs at the Class of 1963 Reunion. (Photo by Harrie Niers)

Every class at Burroughs seems to have a celebrity, and 1963 was no exception. Beverly Adams Sassoon, who appeared in a “Matt Helm” movie with Dean Martin before marrying Vidal Sassoon, was in attendance.  Beverly looked as beautiful as she did back when she was one of the Varsity Song Leaders at Burroughs.  Her career also included being elected 7th grade Class President at Jordan Junior High, as well as Student Body President in 9th grade.  According to Beverly, she spends her time now hanging out with her seven grandchildren, who are living all over the world.

Tom Giuffrida has had an interesting time since the Senior Prom.  Just days after the prom, he and class vice-president Richard Holbrook, flew to New York to appear on the popular TV show “I’ve Got A Secret.”  The celebrity panel didn’t guess their secret, that they had invited the President to their senior prom.  He jokingly admitted to being infatuated at the time with panelist Bess Myerson.  He went on to a career in journalism with the LA Times, Atlanta Journal Constitution, and 23 years as publisher of the Palm Beach Post before he retired 5 years ago.

Although most of the classmates are retired or nearing the end of their working careers, “grandchildren” was the hottest topic around the table at the reunion.  All of us remembered the great time we all had at John Burroughs High School.  1963 truly was a great time — and so was last Saturday night.

If it wasn’t for my friend and fellow classmate Harrie Niers, I probably would not have gone to the reunion.  I’m so glad I did.

Note: Burbank High had their Senior Prom that same night at the Beverly Hilton.  Governor Edmund G. “Pat” Brown stopped by and addressed their prom.  Maybe some things are better left not remembered.