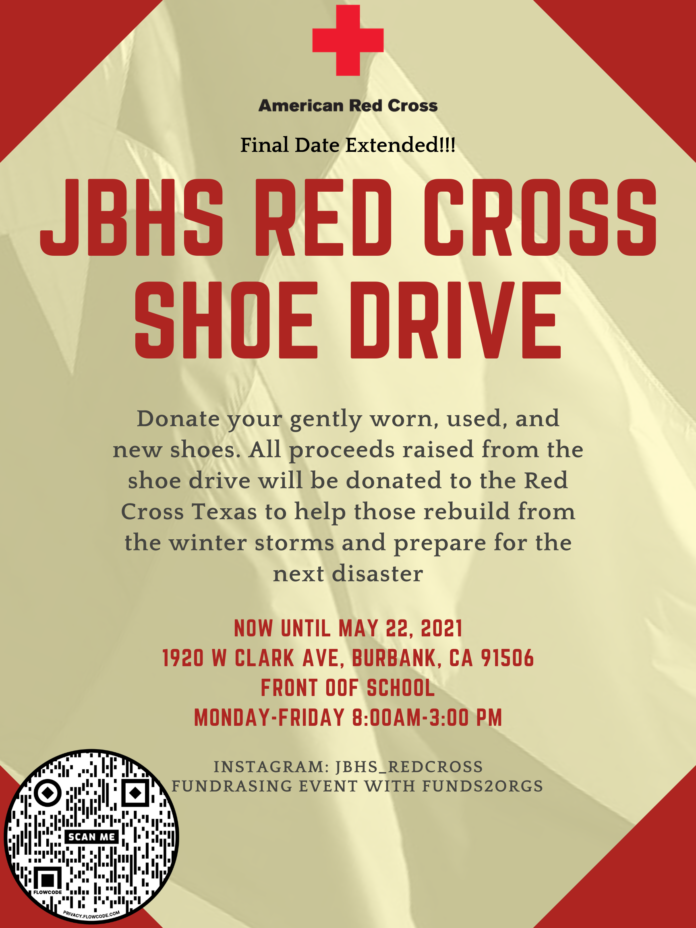 The shoe drive began after JBHS junior and Red Cross Club co-founder, Isabella Munguia, noticed an outpouring of social media posts regarding the difficulties being faced by Texans after extreme winter weather earlier this year. Feeling a strong urge to help out, she consulted with another Burroughs student and began researching methods of organizing a fundraiser that wouldn’t require donors to lend a large share of the money.

“I was seeing all the stuff that was happening in Texas and I felt pretty helpless,” Munguia said. “Times are hard for people with money, so I couldn’t ask for direct donations. But a lot of people have shoes they don’t use anymore, so I thought it was a good idea.”

Munguia then decided to conduct a shoe dropoff system in partnership with Funds2Orgs, an organization that joins in exchanges with shoe drive organizers. Following collecting new or gently worn shoes, activists will arrange for the shoes to be picked up by the Funds2Orgs team, and within 48 hours a check will be mailed to the fundraising organizers. The JBHS Red Cross Club will be donating all proceeds from the shoe drive to the American Red Cross in Texas, which will aid storm survivors who have dealt with food shortages, power outages, and home damages. Funds2Orgs also sends the shoes they collect to developing nations, which in turn helps locals create their own micro enterprises.

The shoe drive began in late February of 2021, and has been extended until May 22. The JBHS Red Cross Club set the goal of collecting a total of 2,500 shoes by the end of the donation period, which they’re currently just shy of reaching. The community’s reception to the fundraiser has been strong, however, as the club has advertised in Burbank and beyond.

“Everyone was very open to it,” Munguia said of the shoe drive. “We started getting donations right away. People started reaching out to me. I was able to advertise it at regional Red Cross events, so we were able to get a lot of people to find out about it and a lot of people are donating.”

Hosting the shoe drive was important to club members who wanted to see to it that fellow Red Cross personnel in Texas would receive as much support as possible to benefit their community. Not only will the JBHS Red Cross Club’s proceeds benefit Texans now, but it will further allow for preparation in the event of future devastation from natural disasters.

“I just feel like this would be a great cause to donate for,” Munguia said. “The people in Texas… had a really hard winter storm. Now it’s just a matter of time preparing for the next big disaster and replenishing the resources, because if we don’t prepare now and they don’t prepare now, then it’s just going to be worse next time around.”

Although she normally maintains a reserved manner, Munguia’s passion for volunteerism and helping others emboldened her to initiate the Red Cross Club at Burroughs. Munguia says she is satisfied in seeing the positive changes the JBHS Red Cross Club is making, which will endure for years to follow after her high school career is completed.

“I was very, very scared to get it started,” Munguia said of beginning the JBHS Red Cross Club. “[It’s been] so gratifying to see other students that wanted to help… I know a lot of the girls and boys in the club are going to continue it once I graduate. And it just makes me happy knowing that this will hopefully be at the school for a while.”

Shoes for the fundraiser can be dropped off outside of John Burroughs High School, Monday through Friday from 8 a.m. to 3 p.m. A collection box will be present outside for all shoe drop offs.