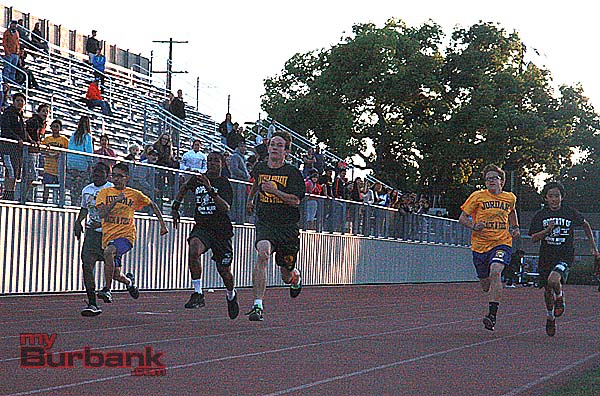 After combining all the points from the boys and girls events for 6th, 7th and 8th grades, John Muir tallied 513 points, Luther Burbank finished with 418 and David Starr Jordan had 311. A total of 16 meet records were broken and new ones established.

For the second straight year, Muir claimed five of the six divisions (every level except 8th grade boys). It was the Mustangs’ 12th city championship over the last 13 years including eight consecutive titles.

On the eighth grade level, Luther Burbank won the boys division with 105 points led by Julian Read who won four events. Muir took second with 68 points followed by Jordan with 34.

“That was awesome. I wasn’t expecting that at all,” Read said about his record in the 100 meters. “My knee was really hurting me and it hurt to walk and just stand up. When I got to the blocks, I felt ready to run. I just blocked it out of my mind. As soon as I started running, it stopped hurting.”

The pain never felt so good for Read as he clearly demonstrated his athleticism and ability to compete in different events.

As for going 4-for-4 in first place medals, Read humbly summed it up.

“My day has been pretty good,” he said.

In the eighth grade girls division, Muir took first with 87 points while Luther and Jordan tied for second with 60 points. Emily Virtue had a strong day for the Luther Yellow Jackets winning events in the 800 (meet record- 2:30), 1600 (meet record- 5:32) and mile relay.

“My coach gave me goal times. In the first race (800 meters), I gave it all I had and got the record,” said Virtue. “In the mile, it turned out really good. I got the time I wanted. Overall it’s been a good day. I was pretty proud.”

At the seventh grade level, Muir swept the boys and girls divisions. For the boys, Muir scored 107, followed by Jordan with 59 and Luther had 41.

Speedster Joshua Johnson of the Jordan Cougars won the 100 meter dash in 12.4 (tied Read for the meet record) and won the 200 meters in a meet record 25.8 seconds. He also took second in the high jump at 4-feet-8 to cap off a sensational day.

“At first I was really nervous,” Eaton said about the 400 meter race. “But as soon as I ran I became more confident in myself and I ended up doing really well.”

Top perfomances of the meet-

Here are the results for the entire meet: