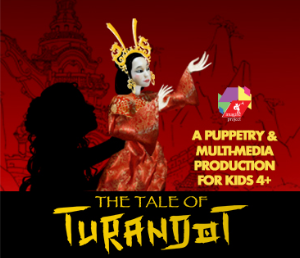 Imagine Project’s inaugural production, The Tale of Turnadot, filled The Colony Theatre with one of the sweetest sounds there is: the delighted laughter of children.

Geared “for kids 4+”, Turnadot offers a full menu of commedia dell’arte:  puppetry, circus tropes, elegant staging, some improv (like when a cell phone rang,) a side of video projections, sweet original songs and a helping or two of audience participation (like pelting the villain with rubber balls), all seasoned with broad comedy.  Think of a big, creative clan putting on a family-friendly play in their den, with their friends and neighbors joining in the fun.  Indeed, Colombina (played by Aviva Pressman) is a wonderful jester, setting the play’s comedic tone.

But Imagine’s version of Turnadot is more than great fun. As classic fables are wont to do, they invite their listeners to recognize profound observations about life.

The traditional Turnadot, reflected in Puccini’s operatic version, is a centuries-old fable of a beautiful-but-cold-hearted princess who requires her suitors to solve three riddles before they can seek permission to marry her.  And if they give so much as one wrong answer, they are sent to their deaths.  For the Colony’s audience, that would be The Pit of Doom, whose very mention summons forth the Chords of Dread.

But Writer/Director Armina LaManna wanted to give Princess Turnadot her own voice, and so re-imagined her as an intelligent, spirited woman seeking control over her life.  In this version, her emperor father had fired her curiosity and encouraged a love of stargazing when she was a child, only to be surprised that she wants to explore the world and pursue astronomy rather than immediate marriage as an adult.  (Perhaps single fathers who had raised only daughters have their own version of this story.)

And so we have one of the play’s major themes: our tendency to underestimate each other as well as our impact on other people.

Princess Turnadot (Arianne Villareal) really didn’t want anyone to die in The Pit of Doom (da-DAH). She thought any would-be suitor would be too afraid to try. She underestimated a young man’s willingness to dare under the right incentives. And she certainly didn’t count on Prince Calaf (Joe DeSoto) coming along and actually being intelligent enough to solve all three riddles. For his part, Prince Calaf underestimated the Princess’ ability to manage her own life, as evidenced by his well-meant offer to build an astronomical tower for her.

Nevertheless, the Princess risks her life to save her emperor father (Mueen Jahan) and his realm; her personal ambitions have not blinded her to valuing her family and society.

At the play’s end, you’re pretty certain the Princess and Prince will marry, but first they will spend some enjoying their newfound friendship, born from a well-deserved mutual respect.

Within the play, there is a wonderful scene where the Princess urges her friend Zilla (Makha Mthembu) to overcome her fear of riding horses (and so carry out her mission), reminding her of how they had both thrilled as children to tales of bravery.  Zilla then realizes it’s time to become that hero, illuminating the wider purpose of the play itself towards its young audience members.

LaManna uses Turnadot to challenges the idea that smart female characters are somehow “less feminine, less desirable and less human.”  (Two mid-century examples of this attitude: Think Zelda in Dobie Gillis.  Or remember the line “No more a smart little girl with no heart” from the South Pacific song, “Wonderful Guy”.) She and Imagine Project take seriously the lines from a more recent musical, Into the Woods: “Careful the things you say, children will listen…Children may not obey, but children will listen, Children will look to you for which way to turn, to learn what to be…”

LaManna points out that “study after study strongly demonstrates the impact high-quality plays have on children’s empathy and education.” That’s why LA’s new Equity theatre for young audiences chooses to tell stories that spotlight female heroes with the courage to find their own voices.

Be assured, though, that the boys were greatly enjoying themselves as well, being particularly taken with the gaudily-costumed comic villain The Evil Sultan of Tashkent (Matthew Henerson.)

So perhaps 10 years down the road or so, when one of those boys is attracted to a girl that seems aloof, he’ll remember the LaManna’s Turnadot, and wonder to himself, “Maybe she’s just afraid I only like her pretty face, and I won’t like her being smart, or having big dreams.” And maybe, just maybe he’ll dare to face the Pit of Rejection (da-DAH) and pleasantly surprise her.

The Tale of Turandot runs at The Colony Theatre through November 17th and includes five school matinee performances.  The next public shows are on Friday the 15th at 7 p.m.; on Saturday the 16th at 11 a.m. and 2 p.m., and on Sunday the 17th at 4 p.m. Tickets are $17 for patrons 12 years old or under, and $25 for the general public. The Colony Theatre is at 555 N. Third St., Burbank. For more information, please visit http://imagineprojectca.com.