Mike Kodama, a member of the Burroughs High Athletic Hall of Fame, has stepped down as the boys’ soccer coach, citing health reasons. 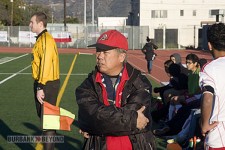 Given that the season is about to start, Kodama said he is going to do all he can to support the team as the school searches for a new coach.

“I’m not going to be completely away,” said Kodama, who won 11 league titles.

This year’s team figures to be one of the best Burroughs has had in years. The Indians went 15-6-3 last season, losing in the quarterfinals of the CIF Southern Section playoffs after winning the Pacific League title last season.

Kodama’s best teams were in 1993 and 1994 when the Indians reached the semifinals and CIF championship game in consecutive years.