Los Angeles Department of Water and Power and the City of Burbank held an open house on Saturday, January 8, at Johnny Carson Park South to show members of the community the staging site for the tunnel boring machine and trunk line replacement work for River Supply Conduit 7 (RSC7) that will occur over the next two years.

Behind the tall solid wall fence that lines Riverside Drive south of the 134 Freeway on the section of park northeast of the intersection of Bob Hope Drive and Riverside, sits a 200-ton, 13-foot wide tunnel boring machine from Schwanau, Germany, nicknamed “Luciana” and a 63-foot-deep pit. 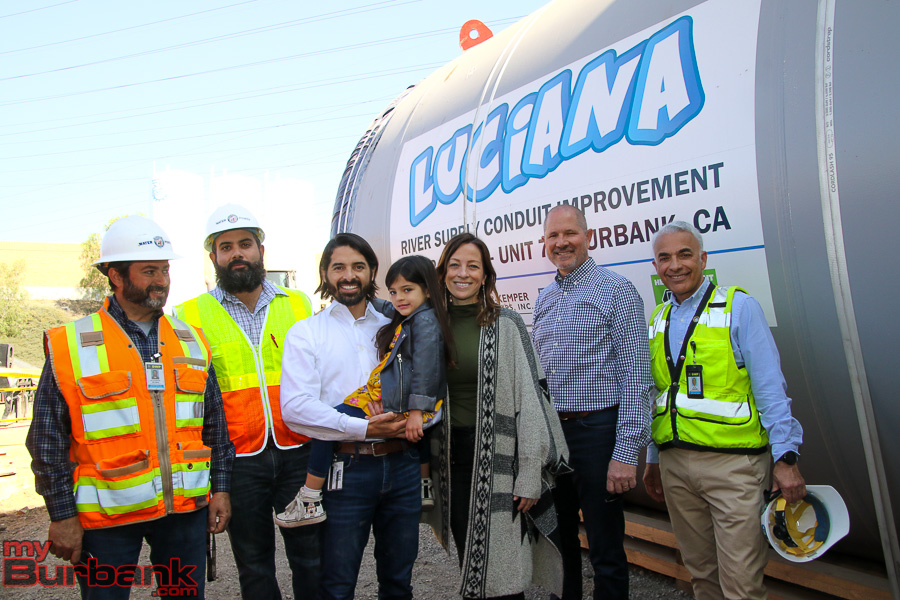 Beginning in March, after Luciana is lowered into the pit, the major tunneling portion of the project will commence. The Luciana can tunnel 60 feet in a 24-hour period. Over the next two years, Luciana will create a 13,000 foot (nearly 2.5 mile) long tunnel in which the replacement RSC7 welded steel trunk line will be placed.

“The replacement tunnel runs under the Whitnall Highway, which is under our power transmission right of way,” explained Michael Ventre, Senior Public Relations Specialist for LADWP.

“It will go from Johnny Carson Park South to the Burbank and Biloxi intersection,” he also said. “The completed water line will transport water from the North Hollywood Pump Station to a reservoir facility at Griffith Park called the Headworks Reservoir.” 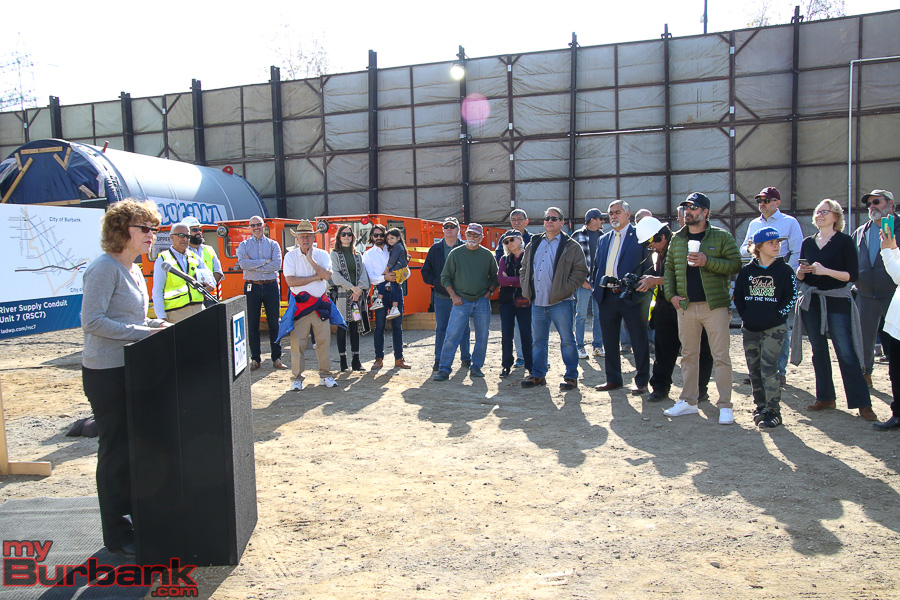 Burbank Mayor Sharon Springer addresses the neighbors who showed up for the tour. ( Photo by Ross A Benson)

“The original RSC pipeline also runs along the Whitnall Highway and is still in service. Once the upper reach portion of the River Supply Conduit Replacement Project (the overarching large project comprised of all the Units) is completed, we will begin using the new pipeline and put the original out of service,” Ventre added. “The original pipeline will most likely stay in the ground to serve as a backup.”

“The City is excited to lend a helping hand to our neighbors and support LADWP throughout this
construction,” commented Springer. “All Angelenos deserve clean, sustainable water as well as reliable services, and Burbank is proud to be a steward in that mission.”

Trunk lines are pipes greater than 20 inches in diameter that transport large amounts of water through the LADWP service area. Many of these pipes were installed in the 1940s and due for replacement. 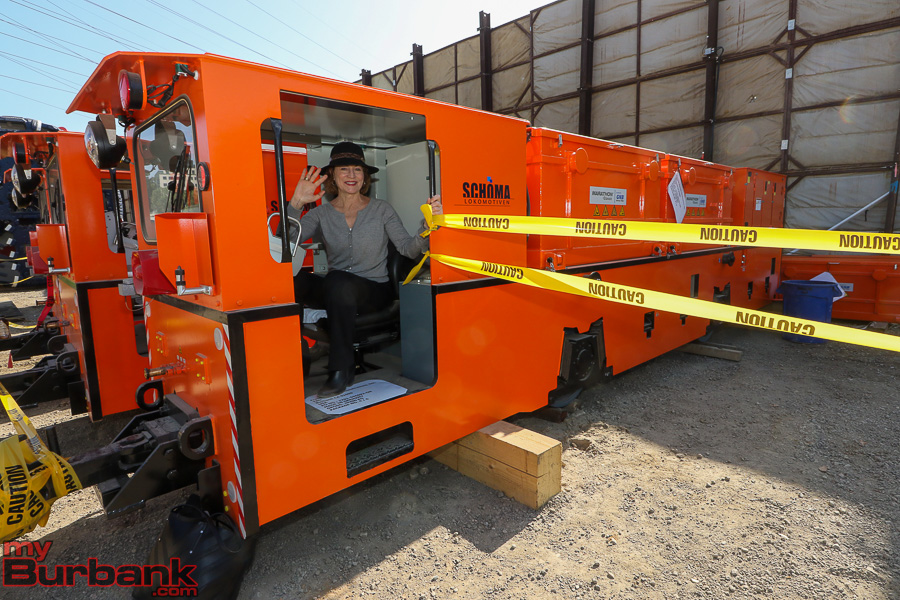 Burbank Mayor Sharon Springer sits aboard some of the equipment that will be used during the tunneling project. ( Photo by Ross A Benson)

“LADWP currently has many projects underway to improve water system reliability and provide
high quality drinking water to the 4 million residents of Los Angeles,” said Harasick. “Because of their size and scope, trunk line projects are among the more challenging in our efforts to upgrade
infrastructure”

“This RSC7 project is a vitally important part of that overall effort, and I would
like to thank both our outstanding LADWP project team and the City of Burbank and its
residents for teaming up to help us make this project a success,” Harasick also said.

RSC7 began construction in December 2018 and the tunneling work is due to be completed by September 2021. The work at Johnny Carson Park South is expected to be fully completed by April 2022 and returned to the City of Burbank, with improvements required for that section of the park to become Burbank’s first off-leash dog park. 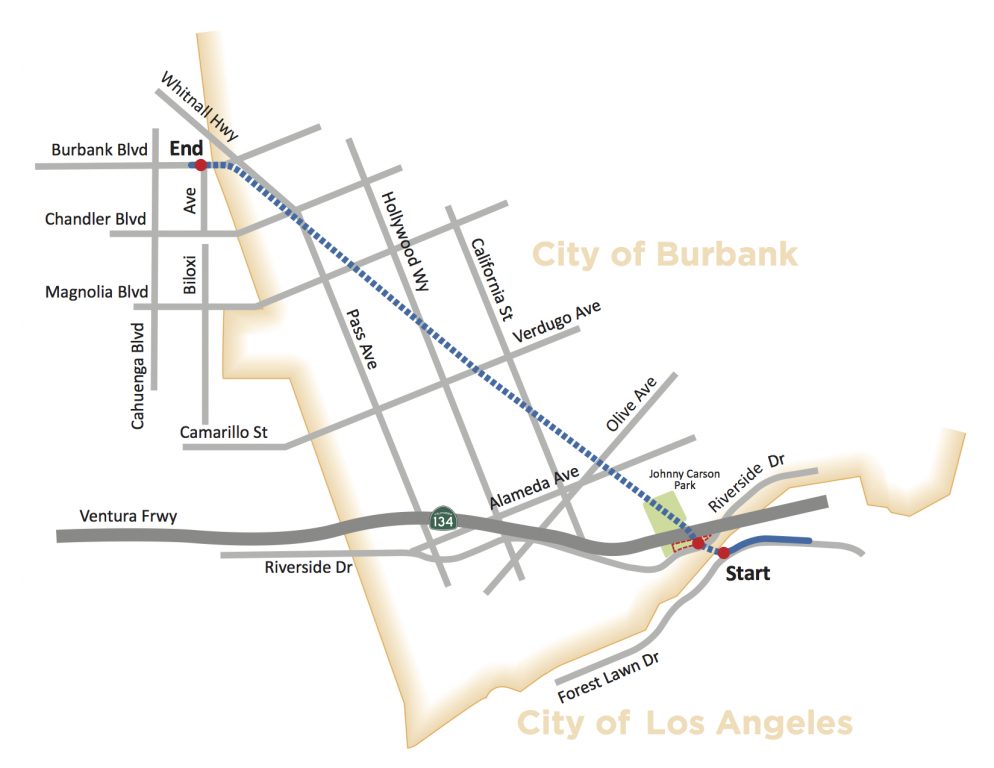 “Per the City’s arrangement with LADWP on their River Supply Conduit project at Carson Park, LADWP is required to restore the park at the end of construction in three years,” explained Marisa Garcia, Burbank Parks & Recreation Director.

“Knowing that this location was the preferred site for the dog park, we successfully negotiated that they pay the City the value of the park improvements, and in turn we use those funds to help build the dog park. We are also actively working to secure a sponsor to pay the remaining cost.”

“It is my intention to request the Council formally approve the dog park project at that site in the coming months,” Garcia added. “Once they have approved it, we can then move forward with design and securing the required approval from L.A. Recreation and Parks. Many are unaware that the south side of Carson Park is under the Griffith Park Trust, and requires L.A. City approval.”

Garcia does not see any barriers to the site becoming Burbank’s first off-leash dog park once the RSC7 project is completed.

City Manager Justin Hess takes a look at the map of the project area. ( Photo by Ross A Benson)

Project Manager Johan Torroledo holds his 4-year-old daughter Luciana whose name was given to the tunnel-boring machine. ( Photo by Ross A Benson)

Burbank Mayor Sharon Springer looks into the large hole where the tunnel project will begin. ( Photo by Ross A Benson)

Burbank Mayor Sharon Springer give information during the project’s open house. This will hopefully be a dog park when the construction ends ( Photo by Ross A Benson)

Burbank Mayor Sharon Springer addresses the neighbors who showed up for the tour. ( Photo by Ross A Benson)

“Luciana a 200-ton 13-foot boring machine that will be used in the tunnel project.(Photo by Ross A Benson)

Luciana Torroledo, 4, is the daughter of the Project Engineer and the boring machine is named after her. (Photo by Ross A. Benson)

Burbank Mayor Sharon Springer sits aboard some of the equipment that will be used during the tunneling project. ( Photo by Ross A Benson)

The boring machine named “Luciana”. (Photo by Ross A Benson)