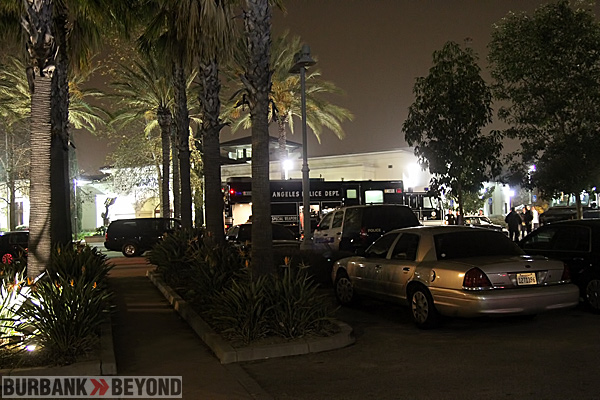 Buena Vista Library was used as a base of operations for LAPD SWAT during an incident late Friday night. (Photo by Ross A. Benson)

Nearby residents were evacuated from their homes, and traffice was diverted along a section of Olive Ave. Friday night, while police dealt with a barricaded suspect situation.

Los Angeles Police Department detectives came to the 2200 block of W. Olive Ave. in search of a suspect wanted for assault with a deadly weapon.  The crime had occurred earlier in the day in North Hollywood.  The suspect was believed to be living in an apartment located on the north side of Olive Ave. between Myers and Lincoln Streets.   The Burbank Police Department was contacted at 8:40 p.m. to assist the LAPD detectives.

The LAPD SWAT team was called when the detectives believed the suspect was barricaded inside the apartment.  When they knocked on the his door, he did not anser.  Burbank Police assisted by diverting traffic on Olive Ave. away from the area, and evacuate nearby residents.  After numerous attempts were made to contact any occupants of the suspect, SWAT officers made entry, and determined that the suspect had fled prior to the officers’ arrival.

The nearby Buena Vista Library was used for evacuted residents,  and also as the base for their SWAT operations.   A mobile command post was set up in the library’s parking lot.  Per the Burbank Police only a few people were asked to leave the adjoining apartments with four staying at the library and one couple going to a local coffee shop.

Once the LAPD determined that the suspect   was not home,  the streets in the area were re-opened.  Residents were able to return home around 4:00 am.

UPDATE:   The suspect being sought by the LAPD for assault with a deadly weapon, Erik Jan Peterson, 43, of Burbank,  was located by police in a small industrial park located just a block outside of Burbank.  The block-long single story multiple unit industrial building is located on the south side of the Chandler Bikeway, between Biloxi and Strohm Avenues in North Hollywood.  Peterson was spotted in one of the units Saturday afternoon. The LAPD used one of their armored vehicles to drag away a covered carport continaing some recreational vehicles, to get a better view of the unit’s entrance.  Tear gas was used to finally flush the Peterson out of the building.   He  apparently suffered self-inflicted wounds, and was transported by LAFD ambulance to the hospital.