The La Mirada Theatre for the Performing Arts is presenting a world-class performance of Les Miserables. The opening-night audience knew it from the first scene, roaring and thunder-clapping their approval of song after song, capping their adoration with a sustained standing ovation at show’s end. 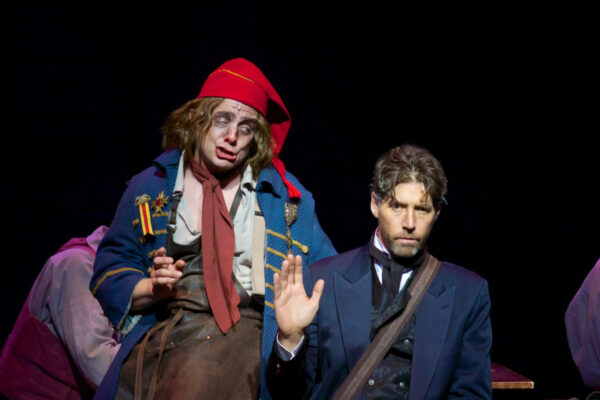 JAMES BARBOUR (Jean Valjean) was a supernova. His magnificent voice fully captured each note and nuance of the heroic humanity of Jean Valjean.

Scene flowed into scene with a graceful economy, aided by a clever set design and precise lighting.

Fans of Les Miserables know that Jean Valjean is an ex-con who was imprisoned for stealing bread to feed his starving niece. After he’s released from prison, he finds that to be a parolee is to be a pariah. A merciful and compassionate Catholic bishop inspires Jean to shed his old identity and the despair that clings to it.  He embarks on a new life where he himself is benevolent.

But Inspector Javert has never given up searching for the now-escaped parolee, and he’s closing in on his quarry. He regards human law as sacred and its violation as unforgivable. He would find no irony in Anatole France’s observation, “The law in its majestic equality forbids the rich as well as the poor to sleep under bridges, to beg in the streets and to steal bread.”

Like so many today, Javert focuses on the choosing and not the choices that give our lives a bruising and brings bitterness to our voices. It’s said that the longest sustained laughter in radio history was a Jack Benny bit where a criminal accosted him and demanded, ”Your money or your life!” Pause. “Well?” the criminal demanded. “I’m thinking,” Jack replied. Of course, its easier if your position in society allows you to choose between your money and their lives.

Before it became a musical, Les Miserables was a 19th century novel by French author Victor Hugo.  As Stuart Fernie informs us (stuartfernie.org), many of the incidents in the novel came from real events. For example, “the incident involving Fantine and the Bourgeois is taken from a genuine incident witnessed by Hugo in which a young prostitute was to be summarily sentenced to six months’ imprisonment after striking a ‘gentleman’ in self defense. Hugo stepped in and explained the facts to the police, using his fame and position to help free her.” I guess it shouldn’t be surprising that it took a person who walked the talk to write one of the greatest novels about the human condition.

For many, Les Miserables has become a kind of secular sermon. But like with religious sermons, the warm feelings afterward can shrivel quicker than the book value of a new car leaving the showroom. The aristocratic women of pre-revolutionary Russia would weep over the fates of the characters in plays and operas, only to callously ignore the beggars between them and their carriages.

Les Miserables reminds me is that the greatest source of misery is not the machinations of corrupt elites but the lack of solidarity among the people. The abused become the abusers, shunning and banishing people hardly less fortunate than themselves. To rise above this tendency, as Jean Valjean did, is heroic. When enough people in the world beyond the stage do likewise, like those who risked life and limb marching for civil rights, real change happens.

Otherwise, all too few hold on to their courage and they must sadly say, as the rebel leader did in Les Miserables, “The people have not stirred. We are abandoned by people who still live in fear.”

Les Miserables will continue to inspire more love and less fear as long as there are performances as moving as those at the La Mirada Theatre for the Performing Arts. Fellow Burbankers, plan having a meal nearby beforehand, and get ahead of the evening traffic. Then it’s only 30 or so fast miles: down the South 5 to Rosecrans, then along Rosecrans to La Mirada. It’s worth the trip. The La Mirada Theatre truly lives up to its Los Angeles Times billing as “one of the best Broadway-style houses in Southern California.” 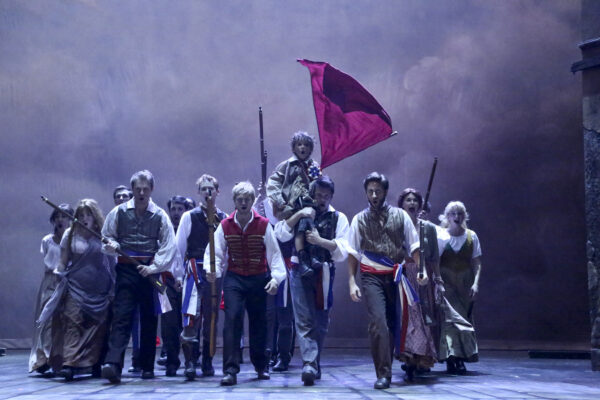 Bravi! to Colony's "The Morini Strad"
You’ll Love Love Again and Again and Again
Italian Bred Is a One-Woman Show Everyone Will Amore
JBHS Drama Presents "To Kill A Mockingbird"