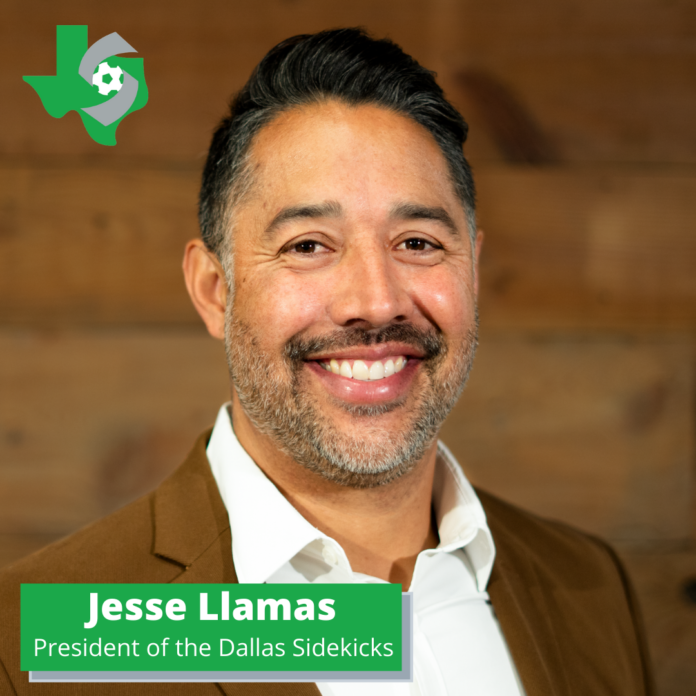 Running any professional sports organization is not easy. Each and every place has its own challenges. In a short time Burbank native Jesse Llamas has immersed himself into in an executive role that requires a lot of patience in putting together a franchise with limited resources.

Llamas, who graduated from Bellarmine-Jefferson High in 1994, was recently elevated to President and General Manager of the Dallas Sidekicks of the 16-team Major Arena Soccer League.

Professional indoor soccer has been around in the United States going back to the late 1970s when the Major Indoor Soccer League was created.  That league eventually folded and indoor soccer has been played under various names until the Major Arena Soccer League was founded in 2008.
Llamas had played as a goalie for the Sidekicks from 2002 to 2004, when the franchise folded, only to be resurrected in 2012.
He was drafted by the Kansas City Comets in a dispersal draft, but elected to remain in Dallas, where he has called home for nearly two decades.

“I was tired of moving. At that point I had lived in seven or eight or seven cities and said I like Dallas. I see the growth, I see the growth potential,” Llamas recalled. “I got my coaching licenses all the way up to a USSF ‘B’ license and stayed in the area and starting doing some coaching.”

Llamas, who played soccer, football and baseball at Bell-Jeff, said he began coaching at Dallas International School, which was just getting its feet off the ground and didn’t have much of an athletic department.

Eventually Llamas became the athletic director and helped expand athletics across the kindergarten through 12th grade school. He remained in that role until 2019.

“When I left there were 42 teams ranging from basketball to cross country.  We started lacrosse. We had everything that one could imagine,” recalled Llamas, who was a product of St. Finbar School before moving on to Bell-Jeff.

Llamas won a pair of state titles as a soccer coach and was glad to have greatly increased participation in athletics at Dallas International.

But something was missing for Llamas on a personal level.

“I’ve always wanted to be an executive of a pro team or even a school. I can’t do it here.  I’m an athletic director. That’s the maximum I can do.  I’m all about growth,” Llamas said. “I took a big step back and got involved with professional indoor soccer team as an assistant coach for a whole year. I started from ground zero.”

Llamas said it wasn’t an easy decision as he had to convince his wife, Ellen. But he quickly adapted and became recognizable within the organization.

“The owner said you’re doing a good job as an assistant. You are organized and I heard you used to be an athletic director,” Llamas recalled.  “He said why don’t you be the director of soccer operations, which is pretty much the team manager. I would handle all the flights, all the player budgets. I started there and made a little bit more money than as an assistant coach. My wife was happy about that. Then last year they bumped me up to general manager/director of operations. I had to deal with the stadium, the game, entertainment, player contracts. I was doing it all. It happened during the COVID year. I had to learn all of the protocols and establish relationships with testing companies. It was a huge learning experience. “

Since the Sidekicks’ season goes from late November until late March, Llamas was faced with another interesting situation this spring.

“In March 2021 they were in search for a president and they said we believe you have the potential to take this to the next level. You’ve been able to run the last few years of knowing the whole organization, we believe you bleed green and you are going to build awareness in the community. In April and May I was just building the foundation of starting to hire a new team, starting to put people in place that I wanted to be part of my team.  I’m been starting to establish some key partnerships in the community.”

So now Llamas, who was officially introduced as the team president on June 21, finds himself trying to fill 26 roster spots on a team budget of roughly $1 million.

Llamas said that is just the beginning of the challenges. Indoor soccer is played on a field similar to hockey in which players can kick the ball off of the walls. This is different from the sport of futsal, which is popular worldwide and is similar to indoor soccer except that futsal’s field dimensions are more like that of a basketball court, where the ball does go out of bounds.

“It is tough because we don’t have very many people who coach indoor soccer,” said Llamas.

Finding players with the same skill set is equally as difficult.

“Nobody grows up playing indoor.  The players that adjust easier to indoor are futsal players,” Llamas said. “We look for futsal players.  They transition a lot easier, but there are not a lot of futsal players in the U.S.”
So Llamas has had to look around the globe to find players to come to Dallas. But it also comes with a cost of obtaining a Visa, and no guarantee that a player will be approved because as Llamas said he cannot offer a salary that is anything close to what an NBA or NFL player make.

Llamas said he is hoping to make his team and the league more popular, like it was in the 1980s when the Los Angeles Lazers played at The Forum in Inglewood and played in front of national television audiences.

One way Llamas is hoping to make the Sidekicks more recognizable is by getting his players out.

“I’m always about the community. I want to give those kids that first-time experience that I had. I remember when I met a pro player for the first time,” Llamas said. “We make our athletes very approachable. We do events and we take two players and two dancers every time.  The kids love it, the grown-ups love it. They play small-sided games with the kids. I’m real big with the community.  I believe players need to be part of the community.”

Time will tell how well the Sidekicks do under Llamas.
But it will tough to bet against him succeeding.
“I like when people think I can’t do it,” Llamas said. “It has always been my way.”