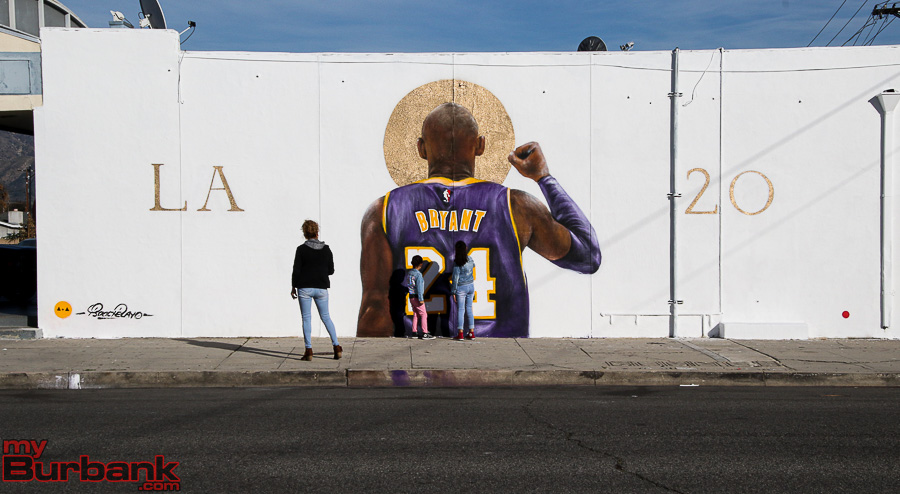 Following the tragic deaths of Kobe Bryant, Gigi Brant, and seven others who passed away in a helicopter crash on January 26, tributes have emerged across the world to honor the basketball legend. The memorials have varied in form, from Nike’s display of his jerseys at a fashion show in New York, to Lebron James’ speech saluting his former teammate.

As a way to pay their respects to Bryant, local artists have been using their creativity to produce portraits in Burbank that represent the essence of who Bryant was and what he meant to not only to the Los Angeles community, but the entire world.

The creative team of Arthur Akopyan and Haibert Sarkisian collaborated together to make a mural at the corner of Verdugo Ave. and Lake St. in Burbank. Their mural showcases the faces Kobe and Gigi Bryant, as well as the late rapper Nipsey Hussle. The painting also displays a colorful background, including a purple and gold mix to reference Bryant’s history with the Los Angeles Lakers.

The duo, who goes by the names of dehmq and eyesbehindart in their artistic enterprises, had already been thinking of creating an image of Hussle, and Bryant’s death gave an additional inspiration to start the project.

“When this whole Kobe thing happened, and when we found out that Gigi died as well,  the first thing that came to mind was, ‘We need an outlet to express this pain,’” said Akopyan.

The strength of character behind Bryant’s success served as a pivotal reason why Akopyan and Sarkisian felt compelled to design a piece of art in his honor.

“As an LA native, [I] look at him as a hero,” Akopyan detailed. “I specifically remember seeing that game where Kobe tore his achilles and got back up and went and shot another free throw and he finished that game. That Mamba mentality that he preaches was literally imprinted into my head after I saw that.”

They worked for a total of five days on the mural, and both artists say they have witnessed the community uniting over their portrait of the Bryants and Hussle.

“It allows you to just kind of let go of who you are and share this one common moment,” Sarkisian said.

Multitalented artist Isaac Pelayo also honored Bryant outside of Nelson’s Liquor in Burbank with a mural depicting Bryant from behind, wearing his number 24 jersey with a golden halo surrounding the late athlete. The background is a simple, glowing white with “LA” and “20” written as an homage to the city Bryant gave 20 years of his epic career to.

Pelayo has become an acclaimed painter over the course of three-and-a-half years, but had never attempted a mural project prior to his depiction of Kobe. Although celebrity portraits are rare for him, Pelayo, a loyal fan of Bryant, felt compelled to honor the LA legend after his saddening and sudden death.

“This one hit differently,” Pelayo said. “This one hit my childhood. When Kobe passed, it was one of those things you just don’t believe.”

Showing Bryant from behind allowed Pelayo to convey Bryant’s strength as a pillar of the city of Los Angeles.

“It represents him a lot. He was a leader. He was never looking back at any mistakes, and he just kept moving forward,” said Pelayo.

For Pelayo, the symbolism behind the mural, which he dubbed “Saint Kobe,” was representative of Bryant’s contributions that went far beyond his time as a basketball player.

“I wanted to paint Kobe Bryant the person, not the basketball legend,” said Pelayo. “I didn’t want to highlight just one thing, I wanted to highlight him as a person moving forward, and he’s going to be illuminating the city for the rest of time. As long as the city stands, and the rest of the world, really. His light will never fade. That’s why the wall is as bright as it is, it illuminates.”

In creating the artwork, Pelayo strived to give onlookers a feeling of hope for the future, even in the face of tragedy or setbacks.

“I hope that it gives people that sensibility of just not being afraid to move forward when you don’t know what’s going to happen. And just keep shining,” Pelayo said.