A Burbank woman has become an overnight celebrity after she appeared recently on the Food Network program “Cutthroat Kitchen.” 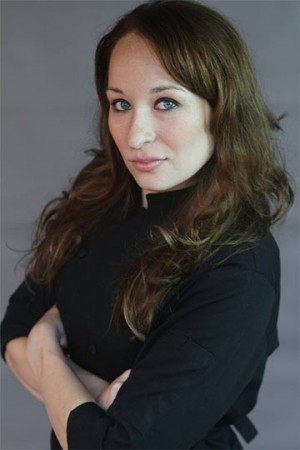 Elyse Lain Elshenawey appeared on the episode of “Cutthroat Kitchen” that aired on October 20.  On the show four chefs compete against each other in three different cooking challenges until just one remains.  Each receives $25,000 to use for bidding for ingredients, or the right to take away ingredients from the others to sabotage their cooking. A judge eliminates one contestant after each challenge, until only one remains.  That winner gets to keep any of the cash they have leftover after the bidding.

Chef Elyse’s rise to celebrity began about two months ago when she got a call from the production company asking her to audition for the show.  A screen test followed. She got an email about a week later telling her things were progressing. Then came the email and voice mail messages, all at the same time, informing her that she had been selected.

“It’s very overwhelming,” said Chef Elyse, referring to the process of getting on the show.

It took about 10 hours of taping to put together the hour-long show.  Viewers didn’t get to see all the sabotages that happened during the taping.  In one sabotage that didn’t air, she had to share a single burner with one of her opponents, who she described as “a little pushy.”  Although he was the eventual winner, Chef Elyse was able to sabotage part of his winning creation.

Her pancakes, followed by her jambalaya, won praise from the judge, and got her into the final cooking challenge — meatloaf and mashed potatoes.   Using her cash to outbid her opponent, she was able to take away all of his ground meat for his meatloaf. He was forced to cut up some not so tender beef.   She also won the right to take all his potatoes and replace them with potato peels.

At this point things were looking good for Chef Elyse, until she remembered that she forgot to get any Worchester Sauce.  As she bemoaned on the air, it really adds flavor to a meatloaf.  Then she was also faced with an oven that didn’t heat up properly.  In a “Hail Mary” effort to save her meatloaf, she fried it like a hamburger — which unfortunately, was how the judge described it.  At least the judge called her mashed potatoes one of the best she had tasted.  Although her opponent’s fried potato peels, in the words of the judge, “tasted like potato peels,” they weren’t bad enough to overcome her “hamburger” meatloaf.

The winner walked away with just over $9,000.  Runner-up Chef Elyse got a travel mug. She described the experience as “a little bit of both work and fun.” She was quite impressed by the show’s host, Alton Brown.

“I’d love to be like Alton Brown,” said Chef Elyse, “He has cooking skills and knowledge about food.”

Although a relative newcomer to the culinary arts, Elyse says it was something she always wanted to do.  She attributes her interest to when she was a child, and her mom worked for a cruise line.  “I was inspired by all the fancy food we ate on cruises,” said Elyse.  The 2003 graduate of John Burroughs High School didn’t take any foods or cooking classes in high school, mainly because they weren’t offered until after she graduated.  She did work at Disneyland in food services after she graduated.  That was in sharp contrast to her next job.

In 2006,  Elyse enlisted in the U.S. Army.  During her 4-year hitch she worked in Air Defense Intel and as a Trauma Nurse/Volunteer as a medical assistant for which she received paramedic training.   She served a tour in Afghanistan doing convoy duty, foot patrols, and helicopter supply, where she came under enemy fire.  Her last duty station was at Ft. Bliss near El Paso, Texas.

Once out of the Army in 2010, Elyse attended the Institute of Culinary Education. She currently works as a chef and pastry chef at Froma On Melrose.  The restaurant specialized in hybrid French/Italian cuisine. When asked about her hobbies, she said, “I love to cook.”  Instead of pictures of herself, family, or pets, her Facebook page featrures pictures of her culinary creations.   She also likes to watch scary old “B Movies,”  sing karaoke, do yoga, and spin.

Chef  Elyse is a relative newcomer to the world of celebrity chefs, but she has certainly caught the attention of a lot of people after displaying her impressive cooking skills.  Although she came in second to a more experienced chef, her culinary skills under less than ideal conditions didn’t go unnoticed.   “I got recognized on the street last week,” she noted