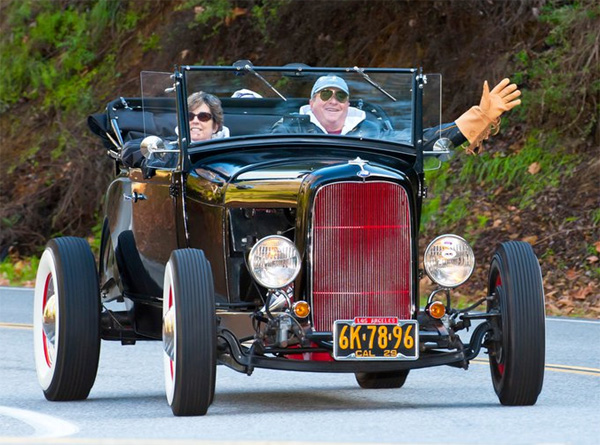 A family with ties to Burbank escaped serious injury after their vintage car was destroyed in an accident near Buffalo, New York.

Steven and Janet Hedke, along with their daughter, Allie, were participating in the Hemmings Motor News Great Race which began June 23, and ended today, July 1.  The race, a rally for vintage cars (built before 1969) that pits driving teams against the clock and each other, started in Traverse City, Michigan and followed a route through 19 cities in the US and Canada, ending  at the Henry Ford Museum and Greenfield Village in Dearborn, Michigan.

The Hedkes are veteran Great Racers, having participated in the annual events from 2000-2007.  This year they entered their 1929 Model A Ford.   It’s a period hotrod convertible with a rumble seat.  By the fifth day of the race, the Hedkes had hit their all time best score, with two perfect legs, and two more with just a one-second error.  They took the top honors last Wednesday over 78 other cars.   The next day, everything changed.

Leaving Watertown, NY, Thursday morning, the race was headed to Buffalo, NY.  Along the way disaster struck the Hedke’s car.  As they traveled down a road at 30 mph, another driver (not connected with the race) in a Chevrolet Suburban, came up behind them and struck them.  The little Model A is no match for a big SUV, but the open rear wheels with no fenders leveled the field.  When the Subuarban drove up and over the left rear wheel of the Model A, it caused both vehicles to swerve.  The Suburban rolled over on its top, sliding to the left towards a barn.  It hit a pole and ended up on its side.  The driver had to be cut out of her Suburban.  The Hedke’s feel the the open tire saved them.

The Hedke’s car veered into a grassy field and rolled over completely, ending up on the driver’s side.  The windshield was torn off and ended up in the road.  The convertible top and sun shade covering the rumble seat where Allie was riding, were flattened.  Fortunately, their seatbelts held them in, and Steven and Janet were able to climb out of their wrecked car and help Allie out of the rumble seat.  Miraculously, their injuries were relatively minor. Everyone had bruises, Steven injured his left shoulder, and Janet got a whiplash.  They spent the day at the hospital emergency room.  Their car wasn’t so lucky.  It may be a total loss.

Noting that the race staff starts each morning with a prayer for the safety of the racers, Janet said, “We are convinced God listened to those prayers for safety, and protected us so that we had as few injuries as we did.”

Not ones to quit, the Hedkes were back in the race on Friday.  The company insuring their Model A, Hagerty Insurance, just happens to be one of the Great Race sponsors.  They arranged for a rental car so the Hedkes could continue on the remaining three days of racing. Although their car was listed as DNF (Did Not Finish) they were allowed to “unofficially” complete the race in the rental Hyundai Santa Fe.  Race officials replaced all the stickers they had earned with the Model A, so that they could be displayed on the “vintage” Hyundai.  They also recieved thier Ace Award plaque for their perfect scores earlier in the race.

Janet Hedke is the daughter of Al Money, and the late LaRee Money of Burbank.  She graduated from John Burroughs  High School in 1974, and USC in 1978.  She has worked for the Walt Disney Co. for the past 18 years.   The Hedke’s live in Valencia.