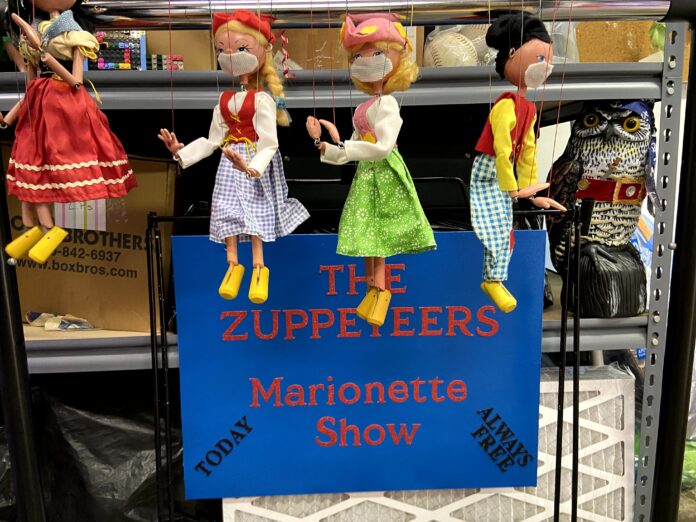 A group of Burbank children are using their puppetry talents to entertain fellow neighborhood members with the joy, amusement, and wonder of a rare form of art.

These young locals, called the Zuppeteers, are members of a puppetry program led by Burbank resident Sue Zimmermann. All of the group members attend Burbank schools, and their ages range from nine years old to 14 years old.

Although Zimmermann began leading a separate children’s puppeteering group in 2011 which her son participated in, this ceased once members matured into the later stages of adolescence. By coincidence, however, in recent years she noticed a photo of a student at her son’s school talent show performing with marionettes. This prompted Zimmermann to inquire with school staff about whether the student would have an interest in leading a resurgence of the puppeteering troupe.

After consulting with her parents, the student, named Audrey, agreed to join the Zuppeteers revival. Now 14 years old, Audrey has been the leader of the group for around three years. As word spread about the fun pastime throughout the neighborhood, five children joined the program by 2019, and now a total of nine team members contribute to the Zuppeteers. Not only has the experience given Audrey a chance to foster her love for marionettes, but it’s also provided valuable life lessons through operating in her authoritative role.

“I know what needs to be done and Sue trusts me for telling [other Zuppeteer members] what they need to know,” Audrey said. “And then working together as a group is great, and it just kind of works.”

Collaboration is a key element of the preparation process for each show performed by the Zuppeteers. First, performance ideas will be brainstormed by members, which is followed by an identification of what puppets will be required for the show. If they don’t possess all the necessary puppets for their vision, the Zuppeteers will either purchase or create the appropriate puppets for the performance. The props and backdrop that further bring the idea to life are next created by hand, and lastly, members spend dedicated hours practicing the act together to ensure their execution is ready for a live show audience.

Zimmermann keeps the team’s puppeteering dynamics distant from rigidly assigned roles and instead grants a great amount of freedom to Zuppeteers participants. This, she says, has resulted in a strong model of teamwork and hands-on success for the group.

“They just naturally fell into certain roles,” Zimmermann said of the Zuppeteers. “So their teamwork abilities… come from them. I don’t assign roles. I will intervene as a referee, as needed, but I personally believe that the school puts in enough regimen around their learning abilities. This environment is not like that for them. They need to be able to make a contribution, test out ideas,…so it gives them a real sense of pride and achievement …and it’s just a really beautiful thing to see their communication come together.”

Throughout her upbringing in Toronto, Canada, Zimmermann and her sister were often gifted puppets for holidays or other celebrations. The brand of the marionettes they were given is called Pelham Puppets. This company produced puppets in England through the 1980s which are no longer manufactured and are now considered to be collectible items. The Zuppeteers handle these puppets with delicate care and update or redecorate them as needed for their shows. A passerby who recently took notice of a Zuppeteers marionette show also donated hand puppets to the program, which members have started to incorporate into their Halloween performance.

Neighbor Doug Boehme lends his help as props master and stage manager of the Zuppeteers. Boehme constructed the stage the children use for all of their performances and practices, and he has reconstructed puppets and props to add dimension to their shows. For example, one prop made by Zimmermann over the summer of 2018 is an intricate totem pole adorned with traditional artwork of the Pacific Northwest Indians. Boehme contributed to the vibrancy of this piece by making it a moving prop. Recently, Boehme altered the Zuppeteers’ show curtain, and is always prepared to help with behind-the-scenes projects as they emerge. Through his involvement in helping the puppeteering troupe, Boehme has witnessed their performance growth as members have maintained a dedicated practice routine under Zimmermann’s leadership.

“The one thing I… do with the kids is work with them more to see what problems [they] see that I can solve or we can solve,” Boehme said. “Sue usually practices [with the Zuppeteers] every Saturday, and we usually go up there and watch how the kids are performing. And from where they were two years ago to what they are now, they’re pros. Their movement, their timing, it’s just gotten so much better. And a lot of that is because Sue keeps them excited.”

Neala, a 12-year-old Senior Zuppeteers member, has used her artistic inclinations to maximize the marionette props used in their shows. For this year’s Halloween performance, she sketched detailed designs to turn a 1960 Pelham fairy puppet into a bride of frankenstein-inspired character. Neala customized the puppet with a handmade bridal veil and flower embellishments, along with face paint and spooky garment additions for a new, inventive character to thrill October audiences.

Another member of the group, 12-year-old Casey, has enjoyed her part in the Zuppeteers so much that she has plans to pursue puppetry professionally in the future.

“I love basically the feel of performing for people,” Casey said. “Especially when you’re puppeteering and you hear all the little kids making noises and everything, and oohing and aahing [during] the show. It’s pretty cool.”

The Zuppeteers’ performance on Saturday, Sept. 25, saw a strong turnout of local parents and young children enjoying the various skits of their Halloween show. Events like these provide a COVID-safe, fun outdoor event with, as the Zuppeteers’ mission statement states, “no entrance fee, no sales pitch, no religion, no politics or the outside world stressors, just a time for kids and their parents to enjoy a break on the speed we all live at.”

Boehme says Zimmermann’s puppeteering teachings, which she balances with her full time work as a paralegal, have been a joy for him to witness and participate in.

“They can get mesmerized in [the show]. They want to get on that stage,” Boehme said of young visitors watching the Zuppeteers perform. “It’s really wonderful for the kids, and…I just admire it [from] all ends.”

Traditionally, the Zuppeteers perform three separate shows each year: one for the spring season, another for Halloween, and one for the winter holiday season. Due to COVID-19, however, their show schedule has been more limited since 2020. They are returning, however, for a consistent set of Halloween performances in October. On every Saturday throughout the month, the group will put on a Halloween show at 351 N. Lima St., across from R.L. Stevenson Elementary School. Marionettes used for this performance include a group of spooky skeletons, a mad scientist, witches, and pirates, which delight local visitors as they observe the whimsical scenes onstage.

“For the show, you can just peek out from around the side and see this huge crowd,” Audrey said. “When you’re actually doing the show you can hear them laughing and all of their reactions. It’s great.”

To learn more about the Zuppeteers, visit their Instagram here.