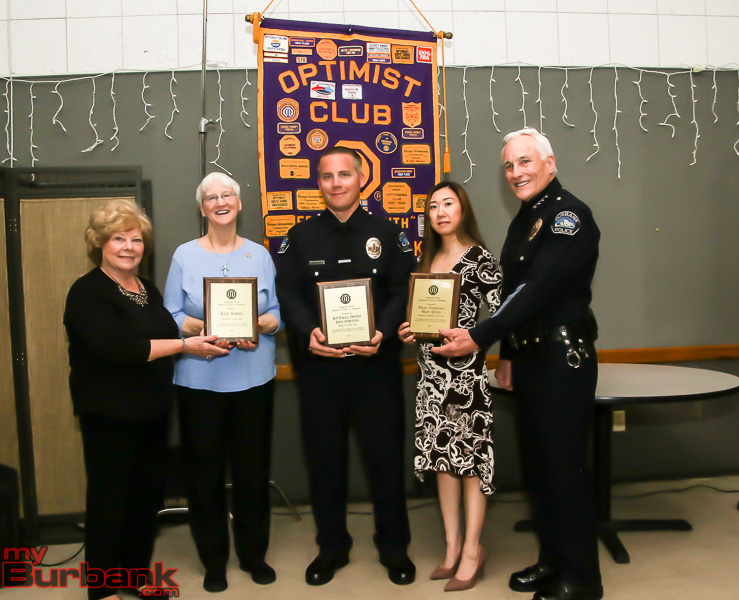 On Thursday evening, the Magnolia Park Optimist Club recognized three members of the Burbank Police Department family for their achievements as part of the Optimist International Respect for the Law program. Citizen Volunteer Kaye Norris, Police Technician Helen Quach, and K-9 Officer John Embleton were all honored in a ceremony with individual achievements highlighted by Burbank Police Chief Scott LaChasse.

Kaye Norris is the 2018 “Volunteer of the Year.” Kaye retired from 35-year career as a teacher in LAUSD, and after a short time taking a break determined “if this is retirement, I don’t think I like it.”  Since then she has found her call through volunteering in activities with her church, and the Burbank Temporary Assistance Center.  However, Kaye also had always been interested in police work, and decided to join the Burbank Police Community Academy course, and fell in love with the environment.  Since then she has spent up to 515 hours and 8 months a year as a Burbank Police Department Volunteer, currently working with the Traffic Bureau. According to Chief LaChasse, Kaye is always open to learning new skills and working wherever needed within the Department.

Helen Quach is the 2018 “Non-Sworn Employee of the Year.” Working with the Burbank Police since 2009, Helen currently works in the Department’s Warrant Office, responsible for maintaining entries supporting restraining orders, and supporting the Subpoena Control Office. She also assisted in the implementation of the Department to a new web-based subpoena system managed by the LA County District Attorney’s Office.

K-9 Officer John Embleton is the 2018 “Officer of the Year.” Officer Embleton joined the Burbank Police Department in 2005 following service with the LA County Sheriff Department and has worked K-9 since 2010.  Officer Embleton and his K-9 partner Bram serve the city and surrounding communities, responding to emergency calls, incidents, weapons, and narcotics investigations, often identifying potential threats simply through experience and awareness.

One such incident took place at the end of October 2018.  Officer Embleton was en route to an early morning K-9 training exercise and came upon a multi-vehicle accident on Interstate 210 near Sylmar. Stopping to render assistance, Officer Embleton also “ran” the vehicle plates as is his routine when making a stop.  In this case, one of the plates came back as a vehicle belonging to a murder suspect from Sacramento County.  The suspect was apprehended, bringing praise to both Officer Embleton and the Burbank Police Department.

Being on the front lines of violent criminal apprehensions, Officer Embleton and his partner Bram are often called to assist other local agencies when needed.  Bram recently was assisting a call supporting LAPD, and when engaging a violent suspect, was injured, breaking several teeth.  Fortunately, Bram is just fine, and is receiving a new set of titanium “choppers” to replace his broken teeth, and will be back on duty soon.

The Respect for Law Program began in 1965 with the support of the FBI Director J. Edgar Hoover, and now includes more than 1500 participating Optimist Clubs around the world. In addition to awards programs honoring police staff, the Optimist Club promotes improved partnerships between police and citizens through programs to introduce youth to community law enforcement officers, lawmakers, law processes, and reinforcing the need for youth to understand and obey the law.

Chief LaChasse noted that Burbank has seen a reduction in crime, with citizens playing an important role in contacting law enforcement when observing activities that have resulted in improved response times and a safer city.

Congratulations to all out Burbank Police Honorees, and to the Magnolia Pak Optimist Club for supporting Law Enforcement and the community through their Respect for the Law Program.