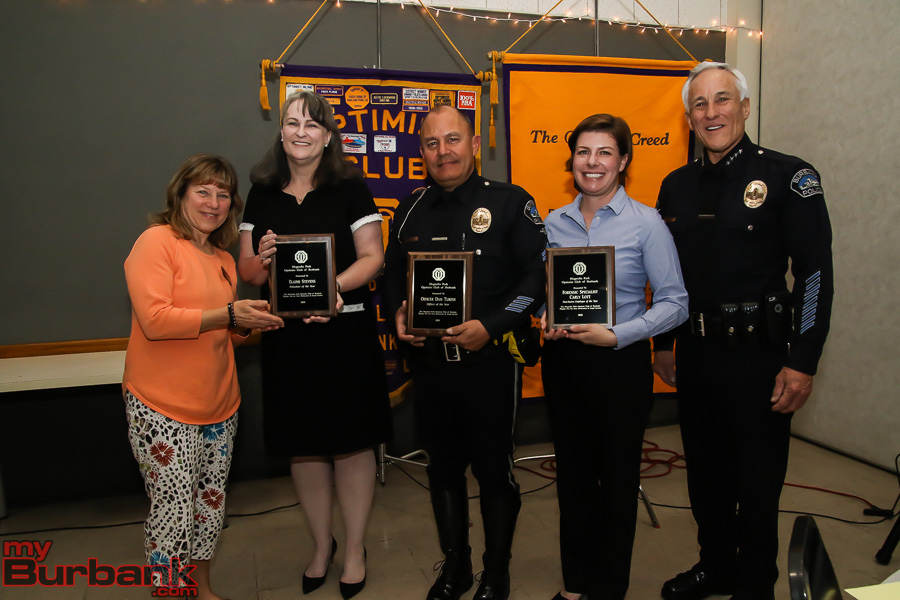 The Magnolia Park Optimist Club honored three outstanding members of Burbank’s law enforcement community at their Respect for the Law dinner last Thursday evening at the Elk’s Lodge, continuing an annual tradition stretching back to the 1990’s.  Event Chair VONDA NEUNDORF opened the ceremonies with a flag salute and invocation, then handed the reins to Burbank Police Chief Scott LA CHASSE.

Chief LaChasse introduced his command staff and thanked the Optimists for the recognition event, noting “the national narrative makes it difficult to recruit new officers.”   So he took a special pleasure in introducing three local heroes whose example upholds the Optimists’ goal “to inspire respect for the law.”

Volunteer of the Year ELAINE STEVENS brings to the table an extensive TV career and a strong background in mass communications.  She’s been helping the Burbank Police Department to discern the messages that would otherwise be muffled under haystacks of data.  It all began in 2013 with Elaine taking, as Chief Scott put it, “a crash course in local law enforcement” aka the Community Academy. She was hooked, becoming an exceptionally devoted volunteer.  Last year (2017) she had given BPD 1100 hours of service, more than what a paid half-time worker would have provided.

Non-sworn Employee of the Year CARLY LOTT has the crucial task of collecting evidence at the crime scene, bringing special expertise in obtaining fingerprints.  Capturing every available detail of a faint or incomplete fingerprint can mean the difference between a manageable number of suspects and a dead end.  Carly joined the BPD in 2002. She began her career in the Records Section and moved to the ID Section soon afterward, becoming trained as a forensic specialist.  Her next goal is to become a certified Crime Scene Investigator.

“Other than the command staff, I’m the oldest police officer in Burbank,” quipped Officer of the Year DAN TURPIN, before he directed the audience’s attention to his Motor Squad comrades. He is their training officer, who himself spent years in the field on motorcycles, in patrol cars as well as on foot as a school resource officer.   Before joining BPD in 1994, he had earned bachelors and masters degrees, and soon demonstrated a gift for combining classroom knowledge with street smarts.

Click Here to read “PROFILE: A Minute with Officer of the Year Dan Turpin”

Each recipient received a commendation from BPD, a recognition plaque from the Magnolia Optimists and, best of all, a home-baked loaf of pumpkin bread baked by Optimist President  Doreen Wydra.  Chief LaChasse and his command staff had selected the three honorees beforehand from a field of many worthy candidates.

President DOREEN WYDRA invites those interested in visiting or joining the Magnolia Park Optimists to call her at (818) 281-2094 for current information.