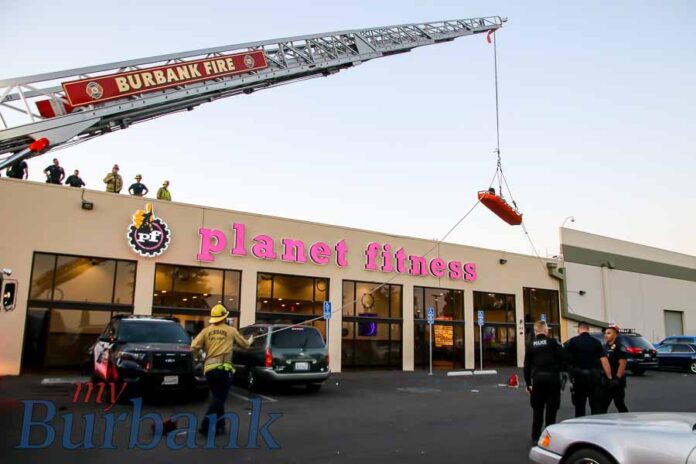 Burbank police took a man into custody on Saturday evening, July 16, after receiving a complaint of someone possibly stealing copper wire from the roof of the Vallarta Market/Planet Fitness at 10950 Sherman Way around 6:20 pm.

Once officers arrived on the scene, the man refused to come down from the roof even after the police helicopter issued commands to him in both English and Spanish. Officers then decided to go up to the roof through the internal ladder of the store, where they confronted the suspect and took him into custody.

After being handcuffed, the man refused to go down the ladder back into the store, and police officers called in a Burbank Fire truck to come in; they loaded him into their stokes basket and hoisted him from the roof to the ground while handcuffed to the basket. Officers also retrieved coils of copper which they booked into evidence.

According to Sgt. Brent Fekety of the Burbank Police Department, “The suspect was arrested and booked for grand theft, a felony.  The suspect has since bonded out and is due back in court on August 8, 2022.”

He also said that detectives are looking into the possibility the same suspect is responsible for similar thefts at the same location over the past few weeks.

On Monday afternoon, July 18, police were again called to the same market for an individual on the roof possibly stealing copper wiring. Once they arrived, the subjects were on the ground, and it was not apparent at the time if a crime had been committed.