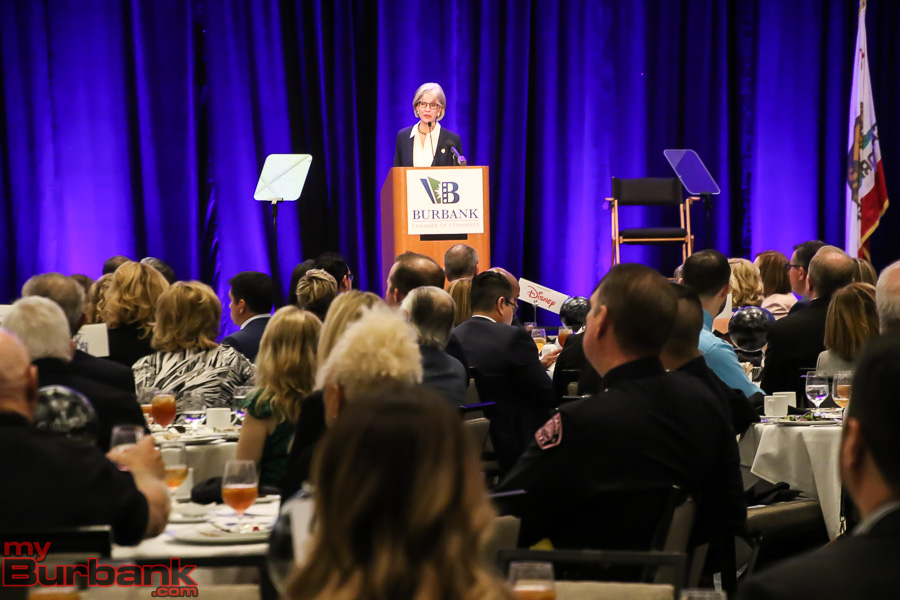 Every year, Burbank’s Chamber of Commerce holds the State of the City Address and 2019 saw a packed house at the Burbank Airport Marriott Conference Room Wednesday morning. Just about every leader in the City, both public and private was in attendance to hear about Burbank’s direction.

This was the second ‘official’ time for Mayor Emily Gabel-Luddy with a third time being when she pinch-hit for an ailing Will Rogers. She was fully prepared and confident saying when asked what she wanted people to get out of this year’s presentation., “I would like people to redouble their pride in the city of Burbank which is a world-class city and I want to tell that story today. We have really lifted ourselves up in a way that us at the head of any city in this country so I want people to walk away feeling proud that Burbank is a world-class city.”

When asked about all the new projects and construction in the City, Gabel-Luddy responded, “All of it is to the good. Besides Disney and Warner Bros., Nickelodeon and Cartoon Network, we now have Netflix coming and that was announced this week.”

As for the future though, the Mayor seemed genuinely enthusiastic, ” As extraordinary as the burgeoning visitor industry here in the community of Burbank that we have more hotel rooms coming online, Warner Bros. will be developing their Second Century Project shortly with the Frank Gehry designed buildings so, besides the median synergies that are going on, there is iconic architecture that going to be built. We are going to have improvements in our transit and we are looking to get more housing in our community and at the same time we are not going to forget the people who are not as well off as any one of us is today.”

Burbank Chamber of Commerce CEO, Tom Flavin, was very direct when asked about his opinion on the day ahead. “Optimism about the future”. He feels it is important for the Chamber to be involved with the speech every year. “This is important to us and our members because it (State of the City) underscores our partnership with the city”

During her speech after lunch, Gabel-Luddy spoke to the assembled as she touted much of Burbank’s present saying over 2,00o film permits were granted this year which does not count what happens behind studio walls.

She also spoke about the impacts of passing Measures T and P, and the effect it has had already on the City, “Your Measure P funds are already hard at work. Our Public Works Department just finished its largest local/residential paving project the City has ever embarked upon. We have more than doubled our annual paving schedule, which now includes 180 local and residential and arterial City blocks, upgrading about 100 curb ramps and diverting approximately 150,000 discarded tires from landfills using rubberized asphalt.”

Of course, the homeless situation is a current crisis which she addressed by saying, “Last year, the City Council approved the homelessness implementation plan and we have had some success. We will use funds from a Measure H planning grant to establish a storage facility for a homeless person’s property. This will allow the City to enforce regulations that prevent the storage of personal items in the public right of way.

Partnerships are key in creating affordable housing that’s why we came together with Burbank Housing Corporation and Family Promise to rehabilitate a triplex for use as a transitional homeless facility. Additionally, we have partnered with the Downtown Business Improvement District to hire Street Plus for the downtown, including the Metro Link facility. Street Plus works with our police department’s Mental Health Evaluation Team and Ascencia, a non-profit homelessness organization, to connect those in need with available resources.”

Housing in Burbank is also an issue with the City Council setting a goal to build 12,000 units during the next 15 years, focusing on transportation corridors.

Construction has completed or expected to start already as she praised developments like the Talaria Project, which houses Whole Foods and 241 housing units and has been recogined with many awards.

“Recently approved is the First Street Village Mixed-use project across from the AMC Theaters. This project will result in the development of 275 housing units, 14 of these will be workforce affordable units along with first-floor commercial. We have other residential development proposals that will soon come to the City Council that include the La Terra Project at 777 Front Street with 573 units of housing and a 307-room hotel, and the proposed Premier on First that will result in 108 new housing units, retail, office and conference space along with a 314-room hotel.

The Marriott-brand AC hotel will soon start construction on 3rd Street across from the Colony Theater. It is estimated that it will contribute more than $1.7M in Transient Occupancy Tax to the general fund annually. Additionally, there are two hotels proposed adjacent to the existing Airport Marriott. These would include Aloft and Residence Inn brands totaling 420 rooms.”

In the end she went on to say what made Burbank a world-class city saying, “We protect our existing single-family neighborhoods while building responsibly. With your help, we are fiscally sound and are taking care of our current infrastructure. Burbank offers strong social networks through our diversity in population, backgrounds, and beliefs.

We are embracing change while determining our future through planning,  setting goals and following through. We beautify our community with arts, culture, and entertainment. We also work with our many non-profits who provide much-needed services the City itself can’t offer.”

There was also a video presentation shot and edited by the City’s Public Information Office that was as well shot and edited as many shows that you see from the studios who dot our community.

Are there still problems to be worked out in the City, yes. And while the outlook of the State of the City left a positive taste, it will take much work in the future to obtain all of the goals.

Editior’s Note: October 25 at 5:00 pm – We now have the video shown at the State of the City Address – you can watch below