McKinley Elementary School teachers and staff have a newly renovated Faculty Lounge in which to enjoy breaks and lunch during the school day. Michael Cusumano of the Cusumano Real Estate Group, who is Principal Liz Costella’s business partner as part of a BUSD school/business partnership, donated the funds and supplies.

“In one of our meetings, I told him I wanted to make over the lounge as a gift for the staff,” explained Costella. “I was hoping for some new tables and maybe some chairs but never dreamed the outcome would be this wonderful and such a wonderful partnership. Michael ran with the idea and enlisted Tim Nelson from his office to be the project manager.” 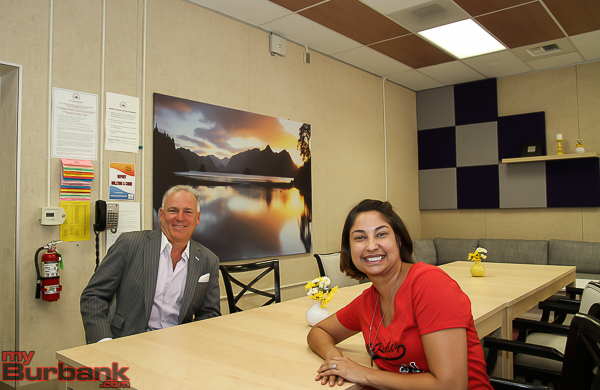 Michael Cusumano and Liz Costella in the new McKinleyFaculty Lounge. (Photo by © Ross A Benson)

Nelson set up a design competition with Woodbury University students, led by Woodbury faculty Catherine Roussel and Annie Chu, who organized and mentored the students’ work.

“The William McKinley Faculty Lounge project became a collaboration with Woodbury University and Michael Cusumano,” commented Nelson. “We wanted to offer a real-world project to the students at Woodbury and came up with a design competition partnered with the two student groups.” 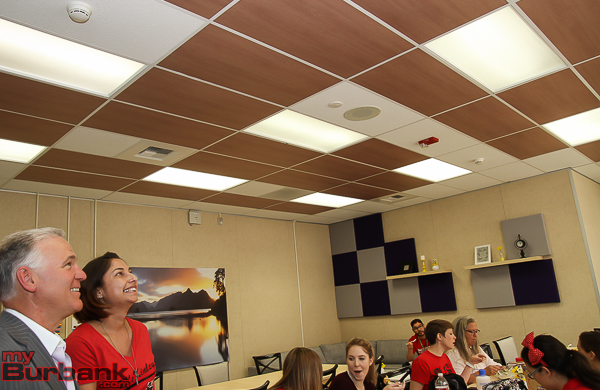 “AIAS (American Institute of Architectural Students) and IIDS (International Interior Design Association) student organizations helped me come up with a design charrette that required students to form groups of at least four students (two architecture students and two interior design students) to collaborate and present their design to a panel that consisted of Michael Cusumano, Liz Costella and a few Woodbury faculty,” explained Nelson.

“The groups were given a budget for the project which they had to expense out in their proposal just like one would have to for a real-world project.”

The winning team consisted of Dylan Bachar, Cory Pham, Marieam Alhamody and Cynthia Nyirinkwaya. They were then tasked with working with Nelson to source vendors and revise the design to Costella’s recommendations. 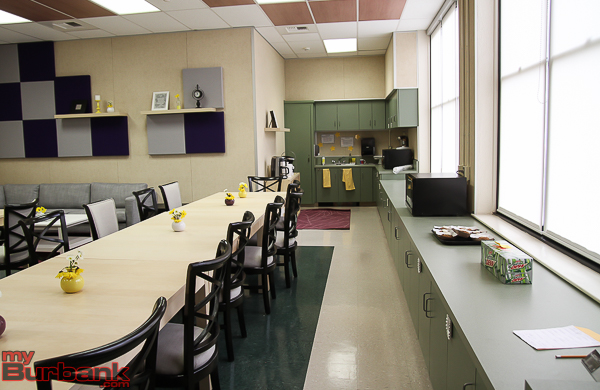 Cusumano also donated 21 chairs, that were not part of the overall budget, which were then stripped, sanded, re-stained and reupholstered to fit the design. Cusumano Group employees donated their time to assemble the furniture and arrange the room.

The overall project from competition to completion took 4 months and cost $10,000, according to Nelson.

“Tim and his team worked all summer to buy the items and put the lounge together,” Costella said. “He personally stripped and stained all 21 chairs every night after work for over a month. This was also possible with the help of my office manager who was here during his time off to help let in the crew as well as help.” 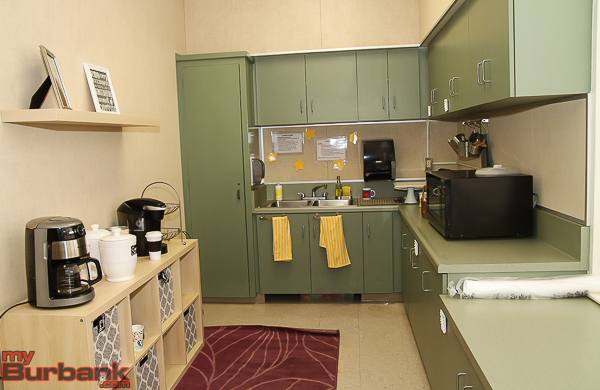 “Not only did he help with the final touches but he donated his time installing ceiling tiles and anything else that was needed,” she added.

“This project was truly a collaboration between many participants and we are so grateful to be a part of it. The lounge is amazing and such a gift for our staff everyone loves it and feels so fortunate to have this incredible room at McKinley.”

“I am forever grateful to Michael for his support and helping me accomplish this,” Costella also said. “It is beyond my wildest dreams and we are so lucky to have this opportunity.”

Michael Cusumano and Liz Costella in the new McKinleyFaculty Lounge. (Photo by © Ross A Benson)