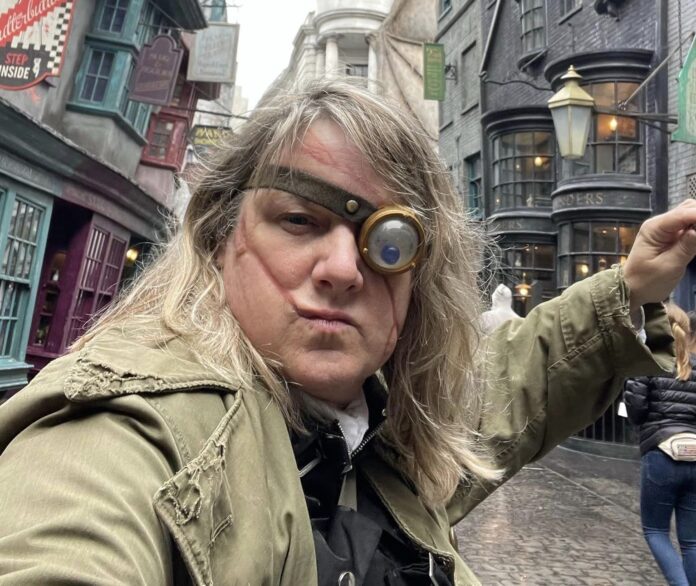 Most know Andrea Seale as a mother, a 15-year special education teacher in BUSD, and a tutor-but there is so much more than meets the eye. Seale is an active cosplayer with over 191,000 TikTok followers and 4.8 million likes.

About ten years ago, Andrea Seale and her then 8-year-old daughter, attended WonderCon, an annual comic book, science fiction, and film convention, in Anaheim dressed as Emmet and WyldStyle from The LEGO Movie. Seale built the costumes herself using a cement form tube and were amazed at the attention they received at the convention. “People ran towards me, got out of lines, and even left their friend groups to come and take pictures. This attention encouraged me to continue on and create bigger and better costumes,” says Seale.

For those that aren’t familiar with the term cosplay, it is a performance art form in which individuals dress up in costumes and make-up to represent characters from pop culture like anime, video games, TV and film. Cosplayers also take on the character’s mannerisms and are known to be experts in their the character they are replicating. Seale’s favorite places to attend as a cosplayer are Universal Studios, Comic-con, Wondercon and other conventions where she can meet other dedicated cosplayers.

“I like to say ‘we dress up in costumes and play the parts,’” says Seale. “It can be as simple or complex as a person chooses based on their level of comfort.” Seale also describes it as a hobby that allows you to have an outlet to be creative, meet new people, explore new opportunities, and travel to new places.

Her menagerie of costumes now includes a Porg from Star Wars, a person being abducted by a Star Wars Tuscan Raider, Mad Eye Moody and Peter Pettigrew from Harry Potter, Disneyland’s Hitch Hiking Ghost, Billy Butcherson from Hocus Pocus, the Demogorgan from Stranger Things, and Wun Wun the giant from Game of Thrones. Seale stores her larger costumes in her den and has a closet dedicated to smaller ones, but storage space is definitely a consideration when adding new costumes to the collection.

Seale makes all of her own costumes and her simplest ones she is able to put together from Amazon basics and thrift store finds.  Her more complicated costumes require more effort and the use of things like chicken wire, foam, fabric and fur. “There are many unique challenges to the larger costumes like being able to move, see and breathe comfortably,” says Seale.

Her favorite cosplay costume that she has created is the Star Wars Tuscan raider abduction which has a similar concept to the inflatable alien abduction costumes that were a hit during Halloween last year. This costume allows her to walk, talk and move easily while still being visually interesting.  Her second favorite is the Star Wars Porg which has won competitions and received prizes for.

Roosevelt Elementary school where Seale works, started an annual Harry Potter night for students that was created by Dr. Meglemre and herself eight years ago. It was Seale’s first attempt at Mad Eye Moody and has improved the character over the years to include an “official” eye, wand and flask.

While the cosplay community can be one of judgement that expects people to choose characters based on their body type, gender and ethnicity, Seale has been fortunate enough to find an inclusive and positive community of fellow cosplayers over the years. “Cosplay truly is for everyone,” adds Seale. “There are families, couples, and individuals who cosplay. It’s a great hobby because anyone, from any background, body type, income level, age, etc. can participate.”

For those not ready to jump into the cosplay world, Seale explains that you can also do “bounds” which she has done in the past as well.  Bounding allows you to wear clothes and have props that represent the character’s colors and is more of an outfit inspired by a character than an actual costume. “These are great if the event or place doesn’t allow cosplay but you still want to show your support for a character,” Seale adds.

For 2023, Seale is excited to expand her cosplay adventures and plans on attending multiples conventions this year as well as adding Anime conventions to her list.  She plans to make updates to her Tuscan Raider costume to attend the Renaissance Fair in Irwindale as well. “I also would like to continue to encourage my fellow cosplayers and support them in their endeavors,” says Seale.

You can follow Andrea Seale on TikTok and Instagram at @cosplaymom99 where she shares photos and videos of her cosplay costumes as well as other cosplayers she meets at conventions.