Students of Muir and Burbank High are part of a major fundraising campaign to modernize the middle school’s Allan H. Burnside Auditorium. The spotlight will be cast on students from both schools’ performing arts classes during the campaign’s kickoff event — “The Really Big Show” on Saturday, February 22, at Muir.

The campaign goal is to raise $100,000, said Principal Greg Miller, who added that very little changes have been made to the auditorium since it was built in 1952. 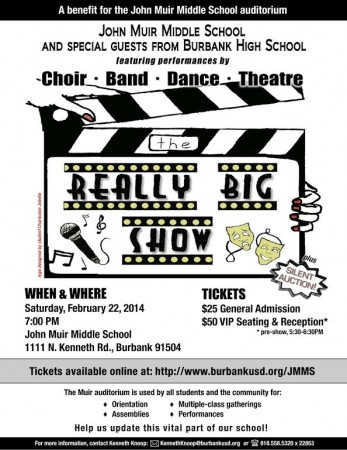 At the top of the wish list is the purchase and installation of three fly systems for lighting above the stage as well as laying carpet down the aisles and tiling the orchestra pit. Other plans are to install a center speaker, purchase and mount a high-quality projector and purchase and install new tree lights along the walls facing the stage.

The stage lights are mounted to the ceiling now and only adults can change them by climbing a ladder. The new fly system will allow students to bring the lights to their level so they can change the lights or add color gels themselves — making it a learning experience, Miller said.

Funds derived from Measure S, a local bond measure that passed in March of 2013, will cover the expense of air-conditioning that will be added to the auditorium this summer, he added. But the campaign funds will go to the remaining items on the wish list.

The kickoff will be a historic show because it’s the first time both schools’ performing arts groups are producing a joint program.

“The first act of the show will be groups from Burbank High School,” Miller said. “Their Unleashed dance group, the Sirens — which is the girls choir — and other choirs will be performing and their drama group will do some improvisation.”

For the second act, Muir’s choir, band and drama groups are performing an original musical together for the first time, he said.

Getting the Muir students involved in the fundraising campaign is a positive experience for them, Miller said.

“Because it’s the space where the students perform, I think it gives them more ownership of the auditorium and the efforts to make the auditorium better,” he said.

And getting Burbank High School students involved gives those students a chance to help their alma mater, because about 90% of those students went to Muir, he added.

Miller hopes to see former students come back to see the show as well as parents whose children went through Muir.

Improvements to the auditorium will benefit the students attending Muir who want to follow a career in the technical side of stage production, he said.

“The auditorium will be more of a classroom where students can get hands-on experience in stage craft,” he said.

And a group of faculty will perform a piece titled “Ode to the Aud” as in auditorium. The evening starts with a VIP reception, catered by Porto’s Bakery, with a silent and live auction.

Another component of the campaign is a tile design fundraiser where people can purchase tiles they create for a Tile Wall.