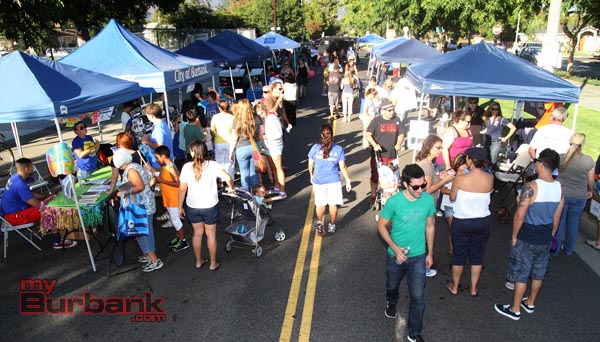 The City of Burbank observed “National Night Out” Tuesday evening, as it has for the past several years.  The event is a one-night rally where citizens and law enforcement come together to strengthen neighborhood spirit and the police-community partnership.

A total of 15 National Night Out events were held throughout the city in addition to the large event held adjacent to the Chandler Bikeway  on Chandler Blvd. between Keystone St. and Lincoln St. next to Edison Elementary School.   Attendance figures were not immediately available, but the crowd this year seemed smaller than in previous years.  Last year 1,100 people attended the City sponsored event.

Co-sponsored by the Burbank Police Department and the City’s Park, Recreation, and Community Services Department, the big event  featured a number of booths.  There were free snow cones for the kids, as well as games and activities.  The Burbank Library, Animal Shelter,  and Burbank Water and Power were there, as well as Friends of the Chandler Bikeway.   A booth by Cal-Trans was dispensing information on changes coming in the next few years to the Golden State Freeway access around the Empire Center.

The police Department had their armored vehicle on display.  Unlike last year, when the public was allowed to climb inside, the vehicle was not open.  Police dog Steevo was there, much to the delight of the kids.  Some were disappointed that police horse “Texas” was not in attendance.  Because of the motorcade taking the President from Bob Hope Airport to make an appearance on the Tonight Show with Jay Leno, there was not time to get the horse ready and transported to the site.   The motorcade was headed back to the airport just minutes before National Night Out was set to begin at 5:30 p.m.

The police department exhibits seemed much less than what was presented last year.  Perhaps it was because of the demands placed on the police department by the Presidential visit.  The Burbank Fire Department had several of their personnel on hand, and a booth where kids  could get a free backpack, but there wasn’t a fire engine there this year.  Last year it was a big hit with the kids.

At least the Burbank Police Commission was in attendance, with a goal of going to all of the other 15 events in town.  Several City Council members were there, as was the new City Manager.

New Yor Life Insurance offered free identification cards for kids.  In just minutes, they printed out a card with the child photo and finger prints, as well as physical description.  As they have been in the past, Target was there with their prizes.  Everyone lined up at 7 p.m. as the ticket numbers were called.

Perhaps it is a sign of how bad the economy really is, but the “free” hot dogs from previous years were now $1 each, as were a bag of chips, or a drink.  However there were plenty of free items being given away, from police badge replica fans, mounted unit coloring books to a “make your own” police car that punched out of paper.   And to carry all the goodies home, Burbank Water and Power was giving away reusable bags.

On the bright side, it was a beautiful evening weather-wise.  The cooler than normal temperature made for a most pleasant experience.  As always, it is was a fun and educational event for all who attended.  The Burbank Police Department did a great job again, despite the demands put on it by the Presidential visit.