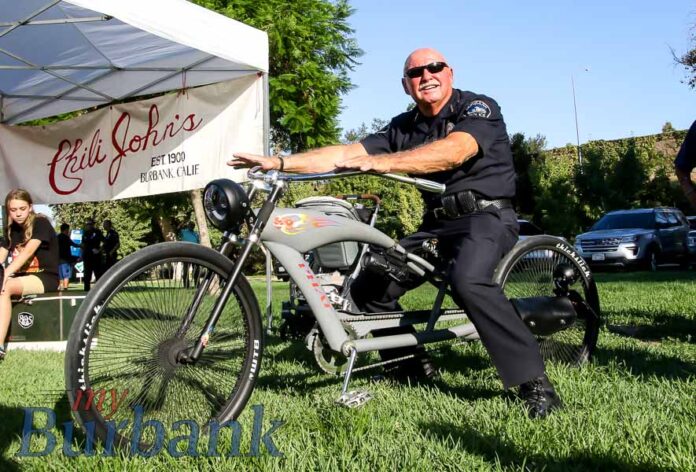 The annual event is hosted by the BPD and consists of members of the BPD and BFD attending and interacting with locals. Both a large social celebration at Johnny Carson Park and numerous neighborhood block parties take place during the summer ceremony. National Night Out is conducted with the goal of bringing citizens together with police and fire personnel to promote safety, as well as solidarity, between the departments and the people they serve.

This was the second year in a row that National Night Out has been centered at Johnny Carson Park, where groups like the Kiwanis Literacy Club of Burbank, Burbank Water and Power, and the Burbank Police Foundation set up booths to inform the crowd about their organizations. In addition, the BPD displayed police vehicles and special units, which attendees viewed as they conversed with department members and enjoyed food and beverages from local vendors. Talamantes shared his thoughts as he witnessed residents uniting for the gathering.

“The community is anxious to get together, so events like this really bring them out,” Talamantes said. “That’s why we put them together. We want the community to come out and enjoy themselves, and that makes me feel good. It’s a feel-good moment, walking around here with all the community members and all the vendors as well.”

One of the features that captivated the crowd was a Burbank Police Department MD520 NOTAR helicopter, which was present at Johnny Carson Park. BPD Officer Jason Embleton informed passersby on how the department utilizes the modern aircraft, which is 50% quieter than older helicopter models.

Burbank resident of 13 years Wendy Alvarado visited a block party and celebrated with neighborhood friends and family members. Following a move from the Midwest to Los Angeles, Alvarado and her family decided to settle in Burbank due to the welcoming nature of the city, which was emphasized through the strong turnout at National Night Out.

“It’s different here,” Alvarado said of Burbank. “There’s a feeling of community that we didn’t get anywhere else. … Moving to Burbank has changed everything for us because we have these events, and we have this community that, anywhere we go, we see somebody we know. It just feels very close and tight-knit.”

Frutos stopped by the same party, where BFD fire engines were parked for the visitors to see. The BFD connecting with community members of all ages was a sight that made a lasting impression on the longtime councilmember and former Burbank mayor.

“What I really like is the expression and the eyes when the fire truck rolls up, and the community says, ‘Oh, wow – our fire department,’” Frutos said. “I watched the fire department interact not just with the kids but the older kids at heart. The interaction – that’s community.”

The BFD sent fire engines to all neighborhood parties for National Night Out, which is a “special” occasion for the department, Chief Garcia explained.

“It’s always nice for us to be able to participate in these community events,” Garcia said. “We were out at Johnny Carson Park just a little bit earlier, and seeing the engagement that we’ve had out there, all the interaction, and then to be able to stop by the block parties, it’s special. We take great pride in being able to see our personnel as well, bringing the fire engines out and participating with the community. So we really enjoy it.”

Two other participants of the festivities were Burbank Police Commission Chair Mike Chapman and BPD Captain Travis Irving. Chapman described the importance of National Night Out in cultivating both togetherness and safety locally.

“It develops not only a neighborhood watch kind of thing, but it also is a camaraderie that you develop,” Chapman said. “So it’s not just a safety thing … you’ve got neighbors and friends. It’s not a wall between people, it’s a handshake.”

Irving echoed positive remarks on the occasion for communication between the BPD and dwellers of the city.

“I look forward to it every year,” Irving said of the event. “It’s a great opportunity for us to mingle with the citizens in town. People are always very welcoming.”

The amount of Burbankers who showed up for National Night Out 2022 was the greatest yet, and BPD personnel expressed their gratitude as they carried out the ceremony’s triumphant return.

“This year’s turnout was by far the largest we have seen, and we thank the community for helping make National Night Out a success,” Burbank Police Department Public Information Officer Sergeant Brent Fekety said.

“National Night Out was a success,” Chief Albanese added. “We were so pleased about the number of community members who participated in the event. It was festive and a great opportunity to engage with our neighbors, businesses, and community members. The families who hosted the neighborhood block parties were welcoming, which added to the success of National Night Out.”